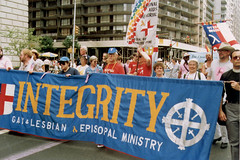 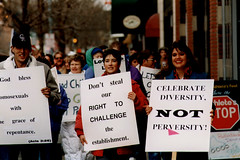 One of the most debated and divisive issues within the Christian community today is the issue of homosexuality. As public conversation about sexual orientation has become more frequent and mainstream, American social, civic, and religious institutions have had to wrestle with new issues of public policy, civil rights, and religious conscience. Since attitudes and values are often profoundly shaped by religious commitments, the churches have had to examine rigorously and prayerfully what Christian attitudes toward gays and lesbians are and what they should be.

One issue has been the Bible and how to understand it. Some Christians believe that the Bible speaks with one clear voice in condemning homosexuality. They cite the story of the destruction of Sodom and Gomorrah in Genesis 19, the “holiness code” in Leviticus, or St. Paul’s condemnation of “unnatural relations” in Romans 1. Other Christians, however, insist that these passages, like the Biblical texts supporting slavery, must be read and studied in their own historical context. The relations Paul describes, they say, are promiscuous relations, driven by lust and the desire to avoid acknowledging God; they are not relationships of mutual love, lived out in the context of commitment to God. The issue of homosexuality, they argue, must be viewed in the light of the overarching Christian message of love and reconciliation.

In what ways should the church respond to gays and lesbians who are part of the “body of Christ,” the church community? Many conservative Christians believe that the church should not condone a “homosexual lifestyle,” but should instead work actively to help homosexuals find a new life in Christ and to change their sexual orientation. Groups like the Christian “Exodus” movement are organized to help gays and lesbians in this transformation. Other Christians believe that sexual orientation is not just another life-choice, but a biological given, of God’s creation and not an abominable sin. For many Christian gays and lesbians, homosexual partnerships, like heterosexual ones, are relationships of choice, of fidelity, and of love, undergirded by foundational Christian principles.

Christians who support gays and lesbians in their congregations insist that the message of Christ is of divine love and reconciliation, not condemnation. In their view, the Christian community should reach out to welcome and support. To signal their openness to gays and lesbians, many local churches have designated themselves as “reconciling,” “welcoming,” or “affirming” congregations. The internet is a tool used by many to organize support for these initiatives, as with “Believe Out Loud” campaign, an online network that brings together affinity groups from many mainline denominations as well as secular organizations.

Another flashpoint in the controversy is the religious blessing of gay and lesbian relationships. In some denominations, there are individual priests and pastors who have presided over ceremonies for gay or lesbian couples, a religious act of blessing for couples wishing to express the sanctity of their commitment within the community of the Christian church. By 2013, several mainline denominations, including the Episcopal Church and the United Church of Christ, had recognized the legitimacy of such unions, while others were still struggling with the issue. Other groups, such as Focus on the Family, a Christian ministry based in Colorado Springs, have mounted campaigns to oppose any legalization of same-sex marriages at the state level. By 2011, Connecticut, Iowa, Vermont, New Hampshire, and New York, and the District of Columbia had joined Massachusetts in officially recognizing same-sex unions within their states. In November 2012, voters in Maine, Maryland, and Washington decided their states would follow suit.

The entry of gays and lesbians into ordained ministry is a further question facing the Christian churches. It is well known that there have always been gays and lesbians in the ministry, but today their presence is more open, more honestly acknowledged, and also more contested. In a few churches, such as the United Church of Christ, sexual orientation is not an issue in becoming a candidate for ordination, and there are a number of openly gay or lesbian ministers. At the other end of the spectrum, some churches so unequivocally reject homosexual clergy that the issue is not discussed. However, in most mainline denominations today, the question is being vigorously debated. In 1992, a Presbyterian congregation in Rochester, New York, called a lesbian pastor to its pulpit, unleashing a nationwide controversy. In 1995, a top executive in the United Methodist Church, who had been ordained for thirty-seven years, revealed that she is a lesbian, bringing public voice to the many ministers who had struggled silently with this issue. In 2003, Gene Robinson became the first openly gay, non-celibate priest to be ordained a bishop within the Episcopal Church. His controversial ordination led to protest within the Worldwide Anglican communion as well as within the Episcopal Church itself. In 2009 and 2011 respectively, the Evangelical Lutheran Church in America and the Presbyterian Church (USA) also began ordaining openly gay and lesbian clergy.

In the past three decades, the issue of homosexuality has moved to the top of the agenda in virtually every major Christian denomination. It is an issue that will not easily go away, for there are deeply committed Christians on both sides.