Fighting for the Bible 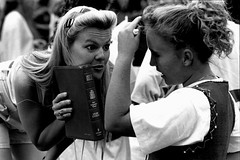 Fighting for the Bible

The question of how to interpret the Bible lies at the heart of many controversies in Christianity today. The Christian Bible, consisting of the Old and New Testaments, begins with the story of creation in Genesis and stretches its vision to the apocalyptic imagery of the book of Revelation. It is not a seamless story, however. The various books of the Bible were written over the course of many centuries and in different languages—Hebrew, Aramaic, and Greek. They were written in many different genres: sagas and histories, stories and parables, lyrics and poetry, sermons and letters. And there are multiple stories; for example even the central story of Jesus is recorded in four Gospels, all differing somewhat in their perspectives. There are even differing versions of what is to be included in the Christian Bible. The Roman Catholic Church and the Eastern Orthodox churches include a section called the Apocrypha, which consists of seven books not found in standard Protestant versions of the Bible.

A 2017 Gallup Poll found that 24 percent of Americans agreed with the statement that “The Bible is the actual word of God and is to be taken literally, word for word,” while 47 percent agreed with the formulation, “The Bible is the inspired word of God but not everything in it should be taken literally…” Others, 26 percent of Americans, said that it is “an ancient book of fables, legends, history and moral precepts recorded by man.”

So how do Christians understand the Bible? This very question is itself controversial. Some Christians, largely from fundamentalist and evangelical traditions, insist that the Bible is literally true, using the term “inerrancy” to convey that stance. A 1974 statement called the Lausanne Covenant put it this way: “We affirm the divine inspiration, truthfulness and authority of both Old and New Testament Scriptures in their entirety as the only written Word of God, without error in all that it affirms, and the only infallible rule of faith and practice.”

Other Christians do not make the claim that the Bible is “infallible” or “without error.” Its truth is affirmed to be religious truth: essential truth for living, but not “scientific” truth. The Bible is to be read not for the “truth” of each and every statement and verse, but for its long record of the relationship of God with humankind, in covenant and forgiveness, in justice and love, and in the life of Jesus Christ. Such Christians affirm the Bible as a trustworthy guide to faith and practice, inspired by God, but necessarily interpreted by faithful Christians of each century, including our own. Some would go further and insist that the focus on the “inerrancy” of the Bible is a form of Bible-worship that might be construed as unfaithfulness to the Christian witness that “the Word became flesh.” With Christ, the “Word of God” is a living word, embodied in a person and not captive to the particular words of scripture.

For all Christians, however, whether they think the Bible is “literally” true or “inspired,” the question of interpretation remains. Precisely because the Bible is so important to Christians, how are its meanings to be understood by Christians today? Many Christian interpreters would maintain that these writings need to be seen in the historical context of the ancient Near East and the Mediterranean world in order to understand what they had to say about such issues as the roles of women and men, the practice of slavery, or the question of homosexuality. Without understanding them in their own times how can Christians begin to grapple with what they might mean for the churches today? Such “historical criticism,” in the view of Biblical scholars, does not diminish the significance of these texts for people today, but brings them to life and enhances Christian insight into what they do and do not mean now. More fundamentalist Christians, however, insist that the Bible transcends the culture it originally addressed and speaks directly and clearly beyond the centuries to Christians today.

There are other forms of study as well. There are those who look at the various textual manuscripts of the Bible and those who study its literary forms and genres in relation to the literature and rhetoric of the periods in which the books of the Bible were written. More recently, some Christian scholars have insisted that the meanings of texts, including the Bible, are shaped not only by the context in which they are written, but the context in which they are read. The presuppositions, the experiences, the political views of those who read the Bible influence what it is they hear. These scholars would argue, for example, that the poor and politically oppressed hear the Gospel with a different awareness from that of the rich and powerful. They would suggest that unless Christians are careful, the Bible might cease to challenge Christians and become merely a mirror of their particular cultural, economic, and family values.

On both sides of every controversy within the Christian church today, people quote from the Bible as an authoritative source for their views. This itself is further evidence that the issue of what constitutes the proper study and interpretation of the Bible is a vital one for Christians.