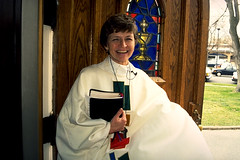 The sixteenth-century Protestant Reformation was sparked by Martin Luther, a German monk whose studies of the Bible led him to attack the leadership of the Catholic Church in his day. First, Luther insisted that religious authority lay not primarily in church traditions, nor in the hierarchy of bishops and popes, but in the Bible alone. The teaching of the church and its leaders must be judged by the standard and teaching of the Bible, which is the sole authoritative source of the Christian faith. Further, Luther insisted that the Bible and the worship life of the church be translated from Latin into the language of the people, so that all might hear and understand it.

From his reading of the New Testament, Luther also concluded that salvation is by God’s grace alone, not by virtue of anything one might do to merit it. And salvation is by faith alone, by the disposition of the heart, not by any penance a priest may prescribe. Luther especially objected to what were known as “indulgences” sold by the church to assure one’s own well-being in the afterlife or the well-being of those who had already died. Luther preached that salvation cannot be earned, much less bought, for it is a gift. In his break with Rome, Martin Luther left the monastic life and married, thus establishing the precedent for married clergy in the Protestant churches. He emphasized the faith of the laity, the Christian life within society, and the “priesthood” of all believers. Luther was excommunicated in 1521.

The Protestant Reformation marked the beginning of what would become a new movement in the Christian tradition. Its leaders and forms were many, but the spirit of the Protestant tradition continued to emphasize the importance of personal faith, the gift of grace, and the authority of the Bible. In Germany, the Lutheran tradition built on Martin Luther’s heritage. Lutheran national churches also developed in Sweden, Denmark, Norway, and Finland. The Lutheran churches of America today include descendants from all of these churches.

The “Reformed” churches have their roots in Switzerland, where Ulrich Zwingli launched a movement of church reform in Zurich in 1522. At the same time in Geneva, John Calvin, in some ways the most influential of the reformers, led a movement that helped found Reformed churches in the Netherlands, Hungary, England, and Scotland. The Presbyterian churches are also part of this Reformed tradition, and they developed initially under the leadership of the sixteenth-century Scottish reformer, John Knox. Today’s Baptists and Congregationalists trace their lineage back to the ideas of Zwingli and Calvin as well.

The more radical Anabaptists took issue with Zwingli and the reformers in Zurich over two issues: the establishment of a state church and infant baptism. They held that Christian faith is a conscious and voluntary commitment of the heart. Thus, they rejected the coercion of any state church and also rejected infant baptism in favor of the baptism of adult believers. The Anabaptists also shaped the formation of the Baptists churches as well as the historic “peace churches,” such as the Quakers and the Mennonites—all of which have been broadly influential in American Christianity.

The English Reformation began in the sixteenth century when King Henry VIII declared the independence of the Church of England from the authority of the Pope. Some Protestants in England went even further than Henry VIII and called for a complete purification of the church. Later known as “Puritans,” these radical dissenters in the Church of England set out for North America in the early 1600s. They envisioned establishing a Christian community, a “holy commonwealth” in the new world. In the 1700s, John Wesley, a priest of the Church of England, launched an energetic devotional reform movement, emphasizing the forgiveness and grace of a loving God. This movement eventually became known as Methodism. Those who remained within the Church of England spread their version of Christianity as the British Empire encircled the world. After the Empire’s dissolution, those churches banded together as the Worldwide Anglican Communion.

Evangelicals have also played a key role in ongoing reformation efforts. Originally, the term was used to describe the 18th-19th century religious reform movements and denominations that resulted from the revivals that swept the North Atlantic Anglo-American world. These revivals were often led by figures like John Wesley(1703-1791); the itinerant English evangelist George Whitefield (1715-1770); and American preacher and theologian Jonathan Edwards (1703-1758). By the 1820s, Evangelicals dominated the American Protestant scene, and played a major role in reform movements such as abolitionism and prohibition. In the early twentieth century, conservative Evangelicals (known as Fundamentalists) who rejected Darwinism and modern biblical criticism would retreat from public life after the Scopes Trial in 1925, only to re-emerge on the national political and social scenes decades later.

During the Reagan era, conservative organizations like the Moral Majority and Concerned Women for America were motivated by what they perceived as a concern for traditional family values. As a result, many Evangelicals focused upon issues such as homosexuality, abortion, and the direction of mass media. Other currents within Evangelicalism included Sojourners, a group committed to promoting peace and social justice since the 1970s and intentional communities like the Simple Way in Philadelphia, which seeks to reform the faith by adapting traditional monastic practices for a modern context, bringing to the fore issues like caring for creation and challenging systems that oppressed the poor and marginalized.