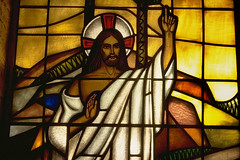 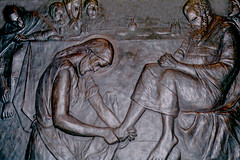 The story of Jesus, as Christians know and tell it, comes from the part of the Christian Bible called the “New Testament.” The first four books—Matthew, Mark, Luke, and John—are known as the “Gospels,” meaning “good news.” They were all written between about 70 and 100 CE, approximately two generations after the death of Jesus, and are based on stories of Jesus, told and retold by his followers. Matthew, Mark, and Luke are called the “synoptic” Gospels, because they present a “common view” of Jesus through many common sayings, parables, and events. Both Matthew and Luke seem to have used Mark’s Gospel in writing their own accounts. John’s Gospel has a distinctive voice, focusing more on the divinity of Christ in the context of a cosmic worldview. The Gospels came out of early communities still struggling with their identity in a Jewish context. The Gospel of Matthew, for instance, is most conscious of the debates within Judaism after the destruction of the Temple in 70 CE, while the Gospel of John shows signs of Christians being expelled from synagogues. Although the Gospels differ in their accounts of Jesus’ life and ministry, sometimes in significant ways, the early church did not blend them into one account, but preserved these four distinct Gospels, with their differences. Together they provide four views of the life and teachings of Jesus.

According to the traditions of Luke and Matthew, Jesus was born in Bethlehem in Judaea in the lineage of King David. Theirs is a story in which the ordinary and the miraculous intertwine. The mother of Jesus is said to be Mary, who conceived Jesus by the power of the Holy Spirit while she was still a young unmarried virgin; Joseph, her betrothed, was a carpenter from Nazareth. Luke’s story is familiar to Christians throughout the world: the couple traveled to Bethlehem to be counted in the census and finding no room at the local inn, had to stay in a stable. Jesus was born that night, his first bed a manger filled with hay. Nearby shepherds with their flocks heard angels singing and hurried to see the newborn child. Matthew says nothing of the stable or the shepherds, but tells of wise men or astrologers, who saw the light of a star and came from the East bringing gifts to honor the child. Mark and John omit the birth story altogether, with Mark beginning his account with the baptism of Jesus, and John with the creation of the cosmos.

There is little recorded of the childhood of Jesus, except Luke’s story of how, at the age of twelve, Jesus’ parents found him teaching the rabbis in the temple in Jerusalem. All four Gospels, however, speak of the critical event of Jesus’ baptism by John the Baptist. The Gospels do not mention his age, but historians say that Jesus was about thirty. John’s message was one of radical repentance and transformation. It was a time of political turmoil and religious expectation; there were many Jewish movements that looked forward to a new age, the coming of the Kingdom of God and the long-promised Messiah, the “anointed one.”

John the Baptist was one who looked to the new age, announcing that the Kingdom of God was near and baptizing people by the thousands in the River Jordan, as an initiation into the kingdom to come. One of those he baptized was Jesus of Nazareth. Mark’s Gospel begins with this account of Jesus’ baptism: when Jesus came out of the water, the skies were torn open and the Spirit, like a dove from heaven, descended upon Jesus with the words, “You are my beloved son; with you I am well pleased.”

Jesus’ baptism marks the beginning of his public ministry of preaching, teaching, and healing. He was accompanied by a group of followers, some of them fishermen, who left their nets and their families, some of them women whose presence can be seen throughout the period of Jesus’ ministry. Jesus attracted large crowds as he began to teach in Galilee. His message of repentance and turning to God was coupled with a message of God’s generosity and forgiveness, God’s love and justice.

The Gospels describe miracles performed by Jesus: healing the sick, casting out the demons of mental illness from the tormented, and even bringing the dead back to life. They also portray a powerful teacher, whose parables made their point in surprising ways. Yes, one should love one’s neighbor, but who is the neighbor? In one parable, a man is robbed, beaten, and left on the road. Many pass him by without giving him help, including respected members of his own community. The one who stops to help him is a Samaritan, a person from Samaria considered a foreigner and an outsider. Jesus insists that the “great commandment” to love one’s neighbor as oneself crosses all ethnic and religious barriers.

In his ministry, Jesus crossed many social barriers as well, mingling with the tax collector, the adulterer, and the prostitute. He warned critics to remember their own imperfections before condemning others and invited those who were wholly without sin to cast the first stone of condemnation. The great commandment is not to judge one’s neighbor, for judgment is God’s alone, but instead to love one’s neighbor.

Jesus taught that the expected Kingdom of God was close at hand. But it would not be an earthly political kingdom, rather a new reign of justice for the poor and liberation for the oppressed. Those who would be included first in the Kingdom were not the elites and the powerful, but the poor, the rejected, the outcasts. Jesus likened the coming of the Kingdom of God to the growth of a tiny mustard seed, growing from within to create a new reality. His disciples and many who heard him began to speak of Jesus as the long-awaited redeemer, the Messiah, who would make the Kingdom of God a reality. When the term “Messiah” was translated into Greek, the word they used was Christos, the Christ.