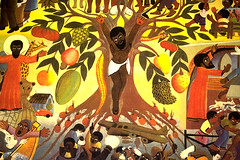 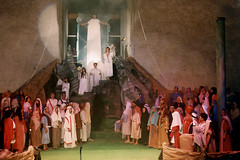 As Jesus traveled and preached, he angered the Roman rulers, who feared that he was provoking unrest among the people and planning a revolution. He was also feared by Jewish leaders because of his challenges to traditional authority and teachings. Jesus named hypocrisy where he saw it and urged his community to claim a new prophetic vision. Those who opposed him saw him as a dangerous upstart who wanted to form a cult around himself. Jesus was well aware of these charges against him by political and religious authorities, and he predicted that he would be attacked and persecuted.

After a teaching ministry of perhaps three years, Jesus went to Jerusalem to observe the Jewish holiday of Passover. There he warned those closest to him of his coming death and gathered them together for a meal that would be their last supper together. He was then betrayed to the Roman authorities by Judas, one of his own followers, and captured. He was denounced by the Jewish high priest as a blasphemer who claimed to be the Messiah. Taken before the Roman authorities, Jesus was charged with sedition and executed by the Roman practice of crucifixion, being nailed to a cross. It was Friday and burial rites would have to wait until the Sabbath was over.

Early Sunday morning, according to all Gospel accounts, some of the women who had followed Jesus went to his tomb to prepare his body for a proper burial. When they arrived, they discovered that the stone at the entry to the tomb had been rolled away and the tomb was empty. According to the synoptic Gospels, a figure in dazzling white appeared and told the women that Jesus had been raised from the dead. In John’s account, a man who seemed to be the gardener appeared to Mary Magdalene and spoke to her by name. It was Jesus. Although their accounts differ, the Gospels report that in the following days, many of the disciples saw Jesus and experienced his presence. This experience of the living Christ is at the heart of the Christian faith.

Those who have followed the path of Christ through the centuries have understood his life, death, and resurrection as a profound affirmation of God’s presence in the midst of humanity. The “Christ event,” according to many Christians, cannot be understood in the context of the first century alone; it is as much a twenty-first century event, repeated and renewed daily in the lives of those who take this as the story of their own faith.