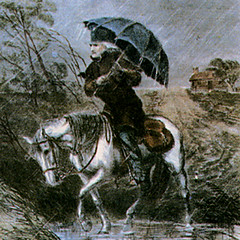 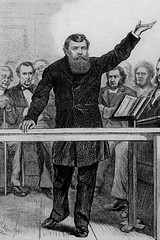 The opening of the nineteenth century saw all Christian churches faced with the challenge of adjusting to an increasingly dynamic society as the industrial revolution took hold in the Northeast and settlers began to flood the western frontier. Census figures from 1790 give an indication of why Anglo-Protestants would play a decisive role in shaping American Christianity. Americans then numbered just under 4,000,000, of whom 1,000 to 3,000 were Jewish, 40,000 Catholic, and over 700,000 African-American, 99 percent of whom were slaves. Of some 3,280,000 Caucasians, roughly 2,900,000 were of British extraction and Protestant.

These Christians understood themselves to have responsibility for the future of the republic. Shaped as they were by Protestantism, they also shared common instincts about many issues: the advantages of religious and political liberty; the moral challenges presented by the expansion of the nation’s frontier; the need for education; and the need to fashion persuasive forms of piety that could thrive in a voluntary society. Congregationalists, Presbyterians, Baptists, Methodists, and Anglicans (now called Episcopalians) soon transformed their long histories of difference and division rooted in the Reformation into spirited but cooperative rivalries. They also forged numerous voluntary organizations as vehicles for moral reform: publishing and educational societies; charitable agencies; temperance and anti-profanity groups. In a sense, this effort was an extension of the earlier “errand into the wilderness” of the Massachusetts Bay Puritans, with this multitude of interchurch agencies forming a new de facto national religious establishment in place of an official “established” church.

In the early nineteenth century, Protestant churches, however distinct and competitive, worked together in a cooperative venture sometimes called the “Evangelical United Front” or “mainstream Protestantism.” Also in the nineteenth century, the revivalist tradition inherited from the Great Awakening found new expression as evangelists like Charles Finney (1792-1875) refashioned revival techniques for use in the rapidly industrializing towns and cities. On the expanding frontier, the rural camp meeting also became a familiar element of evangelicalism. In the second half of the nineteenth century, as the frontier closed, other great revivalists like Dwight Moody (1837-1899) moved into the “urban wilderness,” the booming cities of the Northeast and Midwest.

During the nineteenth century, new forms of Protestantism emerged in direct response to new ideas about the Bible, nature, and science. Some liberal Protestants, known as modernists, often no less evangelical than revivalists, sought to adapt Christianity to the intellectual changes that ushered in modern society—most notable of which was perhaps the assertion by modernists of the compatibility between the Bible and Darwinism. This liberal influence grew throughout the century to become a major force in American Protestantism. By the end of the century, a pronounced schism emerged between liberal and conservative camps over such issues as the authority of science, the infallibility of the Bible, and the role of Christianity in an increasingly secular society. Here were the seeds of a “fundamentalist” and “liberal” split that shook most Protestant denominations after World War I, a split that in many ways solidified during the national drama of the Scopes Trial in 1925.