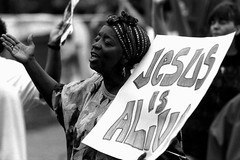 Evangelicalism today is a protean movement that includes Christians on both the left and right of the political spectrum. American evangelicals stand within a tradition whose theological roots lie within the Reformed tradition, manifested in early America in New England Puritanism and elsewhere. Although, as religion scholar Randall Balmer has noted, evangelicals today defy neat categorization, there are some distinguishing characteristics often associated with the movement. These include an individual’s “spiritual rebirth, a ‘born-again’ experience,” “a proselytizing zeal,” and an “emphasis on spiritual piety.” The term encompasses fundamentalist, pentecostal, evangelical, and charismatic forms of Christianity, powerful streams of belief, spirit, and practice that cut across any simple denominational classification.

Late twentieth century America saw the dramatic emergence of evangelicalism in public life, a marked shift from earlier attempts by many within the movement earlier in the century to eschew secular society altogether. The rejection by early twentieth century conservatives of liberal and “modernist” Christian responses to the rise of science, Biblical criticism, and secularism birthed fundamentalism. After losing a struggle with liberals for control of church institutions, fundamentalists withdrew from the mainstream denominations in the 1930s and 1940s to form an extensive subculture which served as an incubator for a range of fundamentalist and neo-evangelical forms of Christianity.

Fundamentalism is characterized by biblical literalism, a clear-cut doctrine of what they believe to be “the fundamentals” of Christian orthodoxy, a unique view of history called dispensational premillennialism, and the establishment of separatist churches and schools in an attempt to shun not only the corruption of society but also the corrupting influence of Christians who believe differently. In the 1970s, however, some fundamentalist groups, most notably Jerry Falwell’s “Moral Majority,” emerged from their self-imposed exile to become public advocates for conservative moral reform.

Like fundamentalists, many conservative evangelicals opposed liberalism and the two streams were closely connected in the first half of the century. However most evangelical leaders came to reject what they saw as the anti-intellectualism and parochialism of fundamentalism. The most prominent evangelical leader in the years following World War II was the evangelist Billy Graham, who developed his style of mass evangelism in the 1940s with the Youth for Christ movement and went on to develop a worldwide television ministry. The institutional elements of the evangelical movement began to develop with the National Association of Evangelicals (1942), Fuller Theological Seminary (1947), Bill Bright’s Campus Crusade (1951), and the magazine Christianity Today (1956). The presidency of Jimmy Carter, a Southern Baptist, brought the evangelical movement into the spotlight so much so that Newsweek declared 1976 the “Year of the Evangelical.” The Megachurch—a space for worship and other activities large enough to accommodate a congregation of 15,000 or more—was another manifestation of the evangelical growth spurt during the 1970s and beyond.

As the 1980s opened, conservative voices like those of the Moral Majority gained traction and the “evangelical” moniker became increasingly synonymous with “Republican.” Politicians, starting with Ronald Reagan, began taking note of conservative Christian views on social issues such as abortion, prayer in schools, science curriculum, and gay rights. The media and scholars alike began discussing the “Religious Right,” as a formidable force shaping the social and political landscape of the country. The Republican party’s courtship of the “evangelical values voter” has been challenged by growing concern for social issues such as poverty and the environment. In the mid-1990s, Sojourners, a group of Christians who had been writing about their concern for “social justice and peace” since the 1970s. Today, Sojourners and Sojourners magazine, under the leadership of Jim Wallis, remain outspoken advocates for “faith in action for social justice.” Red Letter Christians, a blog by Tony Campolo, and “new monastic” communities like the Simple Way emphasize the “radical, counter-cultural message” of Jesus. While Campolo and others “reject being classified as part of the Religious Right” and do not want to “make Jesus into a Republican,” they are quick to add they “don’t want to make Jesus into a Democrat, either.”

Pentecostals are often distinguished by their exuberant spirit-filled worship, “speaking in tongues,” and services of miraculous healing. Pentecostalism’s roots are in the Holiness movement of the late nineteenth century and more particularly the turn-of-the-twentieth-century spiritual healing ministry of Charles Fox Parham of Topeka, Kansas. His community saw evidence of the baptism of the Holy Spirit in their experience of speaking in tongues—as at the first Pentecost. Pentecostalism became a widespread phenomenon in the wake of an interracial revival in 1906 led by William J. Seymour, an African-American preacher, at the Azusa Street Mission in Los Angeles. Within a decade, Pentecostalism gave rise to two new denominations: the predominantly black Church of God in Christ and the predominantly white Assemblies of God. By the 1990s, the loose affiliation of Assemblies of God churches had become virtually a denomination, increasingly multiracial and with large Hispanic congregations.

Pentecostalism experienced extraordinary growth in the middle of the twentieth century with the building of mega-churches, the emergence of media evangelists, and the creation of a loose network of membership that is estimated in the tens of millions. The charismatic movement emphasizing the “gifts of the spirit,” or charisms, is a form of pentecostalism that developed within the mainline Protestant denominations and the Roman Catholic Church beginning in the 1960s. The Pentecostal and Charismatic Research Initiative at the University of Southern California’s Center for Religion and Civic Culture tracks these movements around the world, finding significant growth particularly in the global South and East. As immigrants continue to arrive in the United States, they bring with them pentecostal practices and beliefs steeped in the cultures and histories of their country of origin.