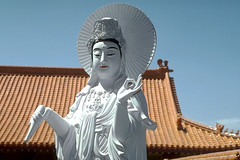 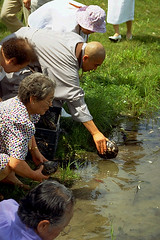 One of the most popular and prominent images in many Mahayana Buddhist temples is that of the Bodhisattva Guanyin, the bodhisattva of compassion. She stands in front of Chua Vietnam on Magnolia Street in Garden Grove, California—a fifteen-foot-tall white image of a goddess bearing a vase of nectar for relieving illness and a willow branch for expelling demons. When the image was dedicated, in January of 1990, the monk Thich Phap Chau compared her to the Statue of Liberty, “Both are international symbols of love, peace, and democracy,” he said. “It is this unity of thought that establishes the unbreakable tie between America and her Vietnamese inhabitants.”

A bodhisattva is an enlightened one who remains engaged in the affairs of the world for the encouragement and enlightenment of all beings. Guanyin was originally known in the Indian Buddhist context as Avalokiteshvara, literally, the one who “looks down with compassion.” This bodhisattva was imaged as male in India and Tibet. In the Tibetan tradition, each Dalai Lama is understood to be the reincarnation of Avalokiteshvara. In East Asia, however, this bodhisattva came to be known as Guanyin and to be understood as feminine, a merciful mother-goddess. Buddhists turn to Guanyin for her boundless compassion and her power to deliver them from trouble and suffering.

Cultivating compassion for all beings is of supreme importance in the Buddhist tradition. In the Fo Guang Pure Land tradition as practiced at many Chinese temples in the United States, for example, this means serving the world, rather than renouncing it. They speak of “building the Pure Land on earth,” rather than aspiring only to the Pure Land of heaven. Explicit acts of compassion become symbolic of this ethos. For example, Buddhists may purchase live fish from the fish market or turtles from the pet store and release them into the freedom of the natural environment. A Canadian example of this practice includes the annual purchase and release of lobsters by Buddhist monks and nuns in the small seaside village on Cape Breton in Nova Scotia, the subject of the short film La Trappe (2007). These small, but important symbolic acts are statements of hearts that are opened by compassion.