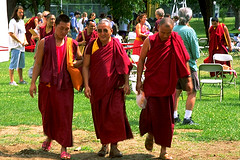 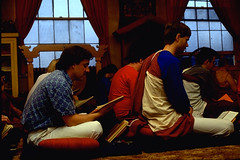 In the seventh century, a major movement within Mahayana Buddhism arose. This stream of Buddhism, called the Vajrayana, is most prominent in Tibet and its surrounding regions, although forms of it are found in China and Japan. The Vajrayana, literally the “Diamond Vehicle” or the “Thunderbolt Vehicle,” understands itself to be an esoteric form of Mahayana Buddhism with an accelerated path to enlightenment.

This Tibetan tradition sees itself as embodying both the teaching and meditation practice of the Theravada monks, as well as the teaching of the “emptiness” of all conditioned things that is distinctive to Mahayana philosophy. Vajrayana is also called Tantrayana, because it is based on the tantras, the systems of practice which emphasize the indivisibility of wisdom and compassion, symbolized as the union of male and female.

Three terms characterize the practice of Vajrayana, each one of which has overt ritual meanings, inner psychophysical meanings, and secret transcendent meanings:

Since the Tibetan uprising in 1959, more than 100,000 Tibetan Vajrayana Buddhists have become refugees in India and around the world. The Dalai Lama, Tenzin Gyatso is head of one of the four major lineages of Tibetan monks and leads a Tibetan government in exile in north India. Other Tibetan teachers, called lamas, tulkus, or rinpoches, settled in the United States during the 1960s and 70s, where they attracted a largely Euro-American following. Only in the 1990s did substantial numbers of Tibetan lay Buddhists arrive in the United States. As a result, America is now a place where a centuries-old Vajrayana tradition encounters a decades-old American convert Vajrayana practice.