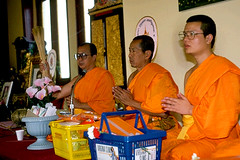 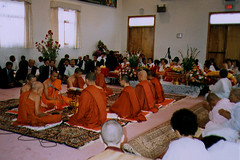 Those who followed the Buddha came to be called the Sangha—the community of monks (bhikshus) and nuns (bhikshunis). Those who became monks and nuns underwent an ordination ceremony of shaving their heads and donning robes to symbolize world-renunciation. They entered into the homeless life of wandering monastics who settled down in monasteries only during the months of the rainy season.

For some, the Sangha is the whole community of the Buddha’s followers. From the beginning, the Buddha’s disciples included laypeople who followed the Buddha’s teachings but remained householders.

Both the ordained and the laity followed the five precepts of basic ethics that are the foundation of religious life. In addition, a more extensive code of monastic rules, the Pratimoksha, eventually developed to govern the conduct of ordained persons.

The monastic and lay communities are interdependent. Even today, the laity receive teachings and guidance from monastics, while the monastics receive food, clothing, shelter, and in some cases all of their material requirements from the laity. Providing food and supplies to the monks is considered by many lay Buddhists to be an act of “merit-making,” earning good karma for oneself or loved ones.