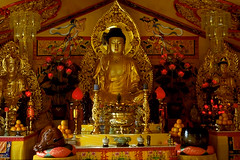 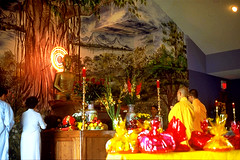 In the fifth century BCE, a prince of India named Siddhartha Gautama is said to have given up his throne, left behind his family and his palace, and set out into the forest to seek answers to the haunting questions of suffering, disease, old age, and death. Through this ardent search and his deep meditation, he gained great insight. He became known as the Buddha, an honorific title meaning the “Enlightened One” or the “Awakened One,” and is considered by many to be one of the archetypal spiritual pathfinders of history.

Within his own lifetime, the Buddha attracted a considerable following in India with his understanding of the suffering of living beings and his teachings about overcoming suffering through moral living, meditation, and insight into reality. Some followed him in the path of renunciation and became monks and nuns. Others remained as laity, learning from the Buddha’s teachings, honoring the Buddha, and supporting the monastic community. While Buddhism has its roots in India, reverence for the Buddha and adherence to his teachings spread throughout Asia, and today the entire world. Buddhism can thus be considered a universal religion in that it is not specifically tied to a particular people or land.

There are currently two major streams of the Buddhist tradition: the Theravada tradition of South and Southeast Asia, including Sri Lanka, Burma, Thailand, Cambodia, and Laos; and the Mahayana tradition of China, Vietnam, Korea, and Japan. The Vajrayana tradition of Tibet, a subset of Mahayana, is large enough that it is sometimes recognized as a third major stream. While these streams are distinct, they are not entirely separate and have continually interacted in Asia. Today, in the early 21st century, all are flowing and mingling in America.