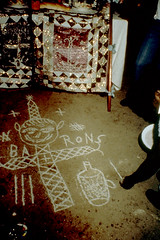 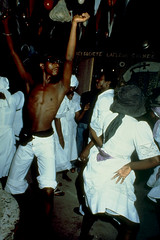 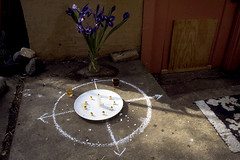 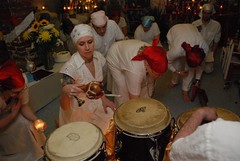 The term Vodou derives from a word meaning “spirit” or “god” in the Fon and Ewe languages of West Africa. It has come to be used as the name for the religious traditions of Haiti, which blend Fon, Kongo, and Yoruba African religions with French Catholicism. However, while Haitians themselves speak more often of “serving the spirits,” today they also use the term Vodou. Since the late 1950s, with the Haitian immigrant and refugee population increasing in the United States, these traditions of “serving the spirits” have become part of the American religious landscape.

By the late eighteenth century, the Caribbean island of St. Domingue, or Hispaniola, of which Haiti occupies the western third, had already received considerably more African captives than Cuba or the United States would receive throughout their participation in the slave trade. Nearly half of the laborers who worked the island’s sugar plantations came from West and Central Africa. After the Haitian revolution made Haiti an independent nation in 1804, the influx of African slaves was cut off, but the large Haitian citizenry of African descent continued to develop elaborate African-inspired traditions.

The Vodou gods or spirits, called lwa, are grouped into several “nations,” linked to areas and peoples in Africa. Vodou temples in Haiti, and some in North America, are marked by a sacred center pole. Intricate corn meal drawings called veve are traced on the ground around the pole to summon individual spirits. On an altar, gifts of food and drink are presented. Singing, drumming, and dance invoke particular spirits to become manifest in one of the devotees. The spirit is said to “mount” and “ride” a devotee as one might ride a horse. The movements, the voice, and the words of one so possessed are understood to be those of the spirit. In this way, the lwa communicate with human beings.

In Haiti, a symbiotic syncretism of Vodou gods with Catholic saints began to take place, possibly one way in which slaves, who were expected to be baptized in the Roman Catholic church, maintained their own religious traditions under the veneer of Catholicism. As Karen McCarthy Brown, scholar of Vodou in both Haiti and the U.S., points out, however, expanding the visual and ritual vocabulary of Vodou through Catholicism was also a natural evolution of African religious syncretism. Dambala of the Fon people, for example, has come to be served as St. Patrick, while Ogou is served as St. James and Ezili Danto as Our Lady of Mt. Carmel. In present day urban Haiti and urban North America, the ritual calendar of Vodou is closely associated with the yearly cycle of the Catholic saints’ feast days.

Vodou practitioners are dispersed throughout the United States, with disproportionate numbers in New York, Florida, Massachusetts, and New Jersey. Though their exact number is difficult to determine, it has been estimated that there are over 450,000 practitioners in greater New York City alone. For many a Haitian oungan (priest) or manbo (priestess), it is a challenge to transplant and reconstruct the practices of Vodou in ways meaningful to life in the United States. Quite often, this means that ritual ceremonies that might have taken place in semi-public sanctuaries in Haiti are conducted in crowded homes and basements in order to insure privacy. Some practitioners, however, meet in storefronts, or rent halls in which to perform their ceremonies. Around a specially selected tree in Riverside Park, a priestess might light a series of multicolored candles to invoke the various lwa. Or Prospect Park in Brooklyn might become the Great Woods—the Gran Bwa—where rituals are performed.

The priests and priestesses of the United States have assumed the responsibility of hosting ceremonies, teaching young initiates or “godchildren” new to the religion, and conducting individual and private consultations for those in search of healing and spiritual well-being. In the United States, Haitian Vodou is also assuming new forms as non-Haitians, many of them African Americans, begin to discover the lwa.

On Being
American Public Media
February 4, 2010

The word “Vodou” evokes images of sorcery and sticking pins into dolls. In fact, it’s a living tradition wherever Haitians are found based on ancestral religions in Africa. We walk through this mysterious tradition — one with dramatic rituals of trances and dreaming and of belief in spirits, who speak through human beings, with both good and evil potential.

[Excerpt from and full audio available at “Living Vodou.” On Being with Krista Tippett. February 4, 2010.]