United Celebration of the Buddha’s Birthday (2003) 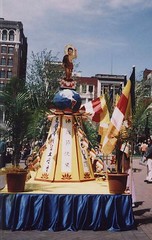 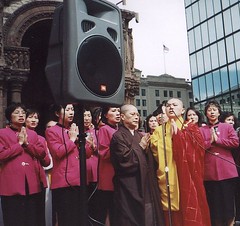 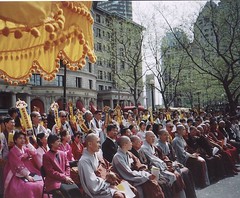 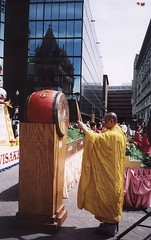 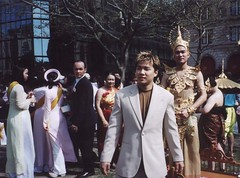 On May 10, 2003, about 50 Buddhist institutions (monasteries, meditation or dharma centers, community, etc.) across Greater Boston gathered at Copley Square, facing the Trinity Church and John Hancock Tower, in downtown Boston to celebrate jointly the 2547th birthday of Sakyamuni Buddha, the founder of Buddhism. This celebration is also known as Vesak, a festival that combines the celebration of the Buddha’s birthday, the day of his Enlightenment and the day of his entering into Nirvana. It is believed by Buddhists that these three days happened to fall on the same day (the full moon day) in May. The united celebration in 2003 was a ground-breaking event in Greater Boston. Formerly scores of Buddhist temples and centers traditionally each held the celebration in its own place of congregation.

The idea of having a joint celebration originated from Venerable Dr. Yifa and Dr. Pat Marshall. It dated back to fall 2002 when Venerable Yifa hosted a memorial on September 11, inviting as many Buddhist institutions as she could in Boston to attend. In winter that year, Venerable Yifa started the organizing committee to translate their plan into reality. Very strict and formal procedures had to be undergone to meet the municipal requirements regarding safety and order. The Greater Boston Buddhist Cultural Center (GBBCC), where Venerable Yifa is the abbess, deposited an insurance in the amount of one million US dollars for using the venue at Copley Square. Pat signed on a 10-article Rules and Regulations set forth by all the applicable departments of the municipal government. “Any violation may result in a denial of a future permit.” That spring, at least two major preparatory meetings were called to map out and discuss the exact protocol, representatives, activities, and duration for each activity as well the general theme and significance of the event.

On the evening of May 3, the last preparatory meeting was convened at GBBCC. Present were about 50 people representing ethnic Burmese, Cambodian, Chinese, Japanese, Korean, Lao, Sri Lankan, Thai, Tibetan, Vietnamese and American/Western followers of the Dharma, a collective term for anything that is Buddhist. All the point persons (master of ceremony, journalists, etc.) and leaders of different denominations and institutions attended the three-hour long plenary session. The three denominations—Mahayana (the Great Vehicle), Vajrayana (Tantric or better known as Tibetan) and Theravada (the Elderly Tradition, a major existing sub-sect of what was retrospectively called Hinayana, meaning lesser vehicle, by Mahayana)—were represented (a broader classification would tie Vajrayana into Mahayana). Mahayana and Theravada have much to share but they also differ from each other significantly. On the understanding of Sakyamuni Buddha alone, Theravadists hold that the Buddha is just a historical figure, an enlightened human, whereas Mahayanists believe the Buddha is not only historical but also eternal and cosmic, manifesting in a threefold body: the spiritual body, rewarding body and transformation body.

On May 10, the day of united celebration, by 11:00 a.m., GBBCC staff and other volunteers had finished the whole setting- up. A rehearsal began at noon. At 2:00 p.m., Sumi Loundon, the master of ceremony, called the celebration to order. To begin, Thick Thien Hue and another Vietnamese monk struck the bell and beat the drum. Shortly, approximately 100 men and women dressed in traditional bright beautiful costumes from the Vietnamese delegation, representing Pho Hien (Samantabadhra) Meditation Temple, marched in, each holding a banner on which were written Chinese characters (Mahayana was introduced to Vietnam from China in the medieval age and the Buddhist Canon Vietnamese use remains in traditional Chinese) meaning Celebrating Buddha’s Birthday. Rearing the long march-in were twenty children carrying flowers with them. This delegation, the largest by number of participants, ended their march flanking the celebration venue, which was walled by row after row of participants: monks and nuns wearing different colors of robes, laypersons and guests.

Five minutes later, the offering began from six delegations, each consisting of sixteen people. The procedure of offering is a three-fold one: at the first bell, everyone holds the offering over the head, a respectful sign that the offering is to be for the Buddha who is higher than one’s self; at the second bell, the offering is held in front of one’s chest, signifying sincerity in offering; at the third bell the celebrant presents the offering with both hands at the altar. Candlelights, flowers, fragrance, fruit, tea and incense were offered respectively by Chinese from Massachusetts Buddhist Association, Koreans from Sounsa, Vietnamese from Pho Hien, Thais from Wat Nawamin, Chinese from GBBCC and children from GBBCC. The whole offering protocol ended with fifty children from Pho Hien tossing flowers around the baby Buddha statue that sits high on a simulated stupa which was wreathed by calligraphy in eight languages marking the Buddha’s birthday.

The fifteen-minute offering ceremony was followed by prayer and chanting. Each of the six representative groups had five minutes to perform the ritual in its native language: Pali, Korean, Japanese, Vietnamese, Tibetan and English. The Buddhist ritual states that at the end of a prayer, chanting or dharma event, the performers need to transfer the merit thus collected to the Buddhas, Bodhisattavas and all sentient beings. The Chinese group led by Kwang Xian from Thousand Buddha Temple and Yifa from GBBCC performed this dedication ritual to complete the 20-minute prayer and chanting.

If the protocols so far were purely religious rituals, the next two items—speeches and artistic performances—saw a marked variation. In Venerable Yifa’s keynote speech, she said that it is indeed a wonderful occasion that all the Buddhists institutions in Greater Boston could meet to celebrate the Buddha’s birthday. She hoped that this first ever event of united celebration will carry on in the years to come. As a principal organizer, Yifa thanked each participating institution for responding and contributing actively to the success of this historic Buddhist congregation. She finally stressed the significance of this groundbreaking ecumenical Buddhist celebration and prayed for peace in the Middle East and SARS- stricken Asian countries and regions. Dr. Chris Queen, a senior lecturer of religion at Harvard University, recounted very briefly the biography of the Buddha and the history of Buddhist development. Then he focused his speech on engaged Buddhism. He encouraged Westerners to join Buddhists as Buddhism moves to the West. A well-established instructor and activist in engaged Buddhism, Queen expressed his wishes for Buddhist peace to be pursued at a broader social level as well as personal and spiritual level. In his speech, Boston University professor John Makramsky addressed how different faith traditions looked at Buddhism, which remains largely unchanged over the past 2500 years. He also explained the symbolic meanings of some of the rituals in Buddhism. Malaika Thorne, a young Latin American woman, reported how she was brought up in her family in the United States as a Buddhist.

The glamorous artistic shows that followed the speeches brought the festivity of the celebration to a height. There was a Thai dance from Wat Nawamin, a Chinese palace dance from GBBCC and a Korean Choir by Munsusa. The Thai dancer performed the meditative and elegant dance on a platform of about nine feet square. The platform was shouldered by seven people during the entire dance, which lasted about ten minutes. The audience had a chance to get a glimpse of the wealth of diversified, idiosyncratic art performance from Asian cultures. This festive atmosphere took a sudden turn into solemnity when a one- minute silent meditation of the whole assembly was called. With the striking of the big bell, all came out of meditation and extended peace to people in areas which have been struck by war and SARS.

Next came the last but most significant portion of the celebration: the showering of the statue of the baby Buddha. Monastics followed by other participants all lined up in two parallel columns. It took over two hours for approximately one thousand people to shower the statue. Whoever is to shower or bathe the Buddha makes a half bow before the Buddha. He/she then scoops up a ladle of the pure water from the basin in which the Buddha statue stands. Slowly and meditatively he/she then showers the baby Buddha statue by sprinkling the water from the top of the head down the shoulder. Others seemed to prefer showering from the waist and moving upward. Despite the diversified preference of formal manner, everyone is expected to contemplate or visualize the showering as if it is cleansing one’s own defilements accumulated from time immemorial. According to Venerable Yifa, when one is showering the baby Buddha, he/she is renewing a vow to “live as the Buddha taught. In return, participants may receive such karmic merits as longevity, happiness and prosperity for themselves and all sentient beings. The shower itself pays respect to the Buddha in a symbolic reenactment of the heavenly shower of nectar that fell at the time of his birth. It also serves as a reminder to us to use Buddha’s teaching to cleanse our minds and cultivate wisdom, to work for the benefit of society and the relief of all suffering.”

The size of the celebration and the beauty of the festivity, replete with dazzling colorful costumes and wonderful performances, all contributed to the success of this historical event. “I think it is just beautiful,” said, Grove Harris, the administrative director of the Pluralism Project at Harvard. And yet participants’ opinions remained divided on a few issues. Among them is the question of whether the celebration should remain a strictly Buddhist one and thus refrain from any kind of politicization or social involvement. Those who are against “politicization” don’t want to incur unnecessary suspicion or trouble in a time of heightened sensitivity to alien religions or cultures. On the other hand, people who are regarded as “politicizing” by extending peace to war- or SARS- stricken people and regions contended that peace itself is the essence of what the Buddha taught. If prayer and meditation are not for peace, individual and social, then what on earth are they for? Another issue is whether the event should include not only Buddhist adherents but also Buddhist scholars and even followers of other faiths, not only Buddhist monastics but also lay followers in prayers and chanting, not only Asians or Asian Americans but also Caucasians and indeed whether it should be ecumenical. Proponents of the vision led by Venerable Yifa believe that Buddhists in America need first and foremost to foster communication and unity within their own community, which then may develop into a more significant voice in the society. Yet, encouraging Caucasians to participate provides a very rare chance for both sides—Westerners and Asians alike—to learn from each other. Westerners or Western Buddhist converts will learn that Buddhism consists of much more than just meditation. Moral precepts (sila), meditation (dhyana) and wisdom (prajna) are practiced with one leading or at least linked to the other. Each is an integral part of Buddhism. Asian Buddhists or Buddhists of Asian descents, on the other hand, need to learn how to adapt Buddhism to American culture and make it localized. United celebration of this kind provide such a chance of mutual learning. No true understanding of essentially different faiths and cultures seems possible without reciprocal exposures and experiencing the differences side by side, generation by generation.