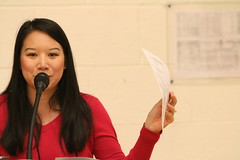 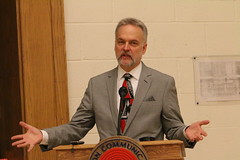 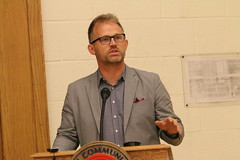 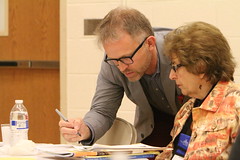 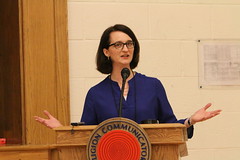 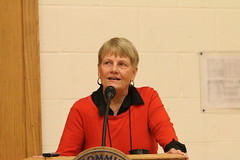 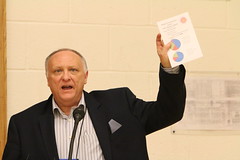 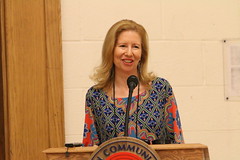 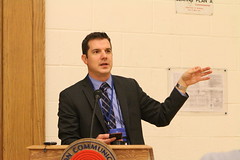 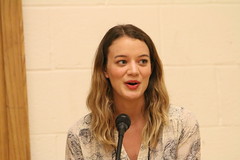 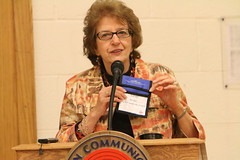 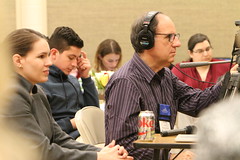 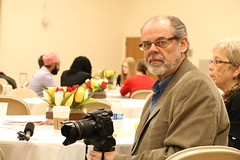 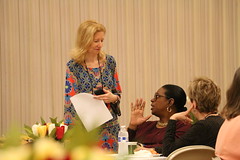 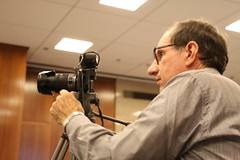 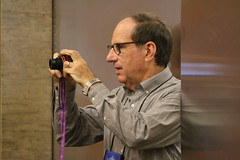 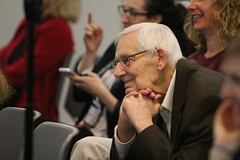 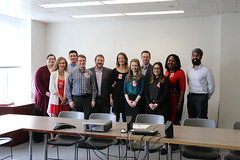 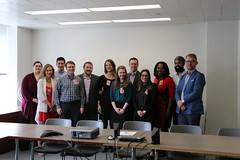 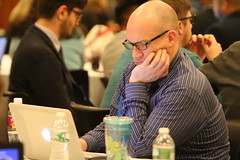 On Thursday, March 31 through Saturday, April 2, 2016 over 100 Religion Communicators Council (RCC) members met throughout New York City for a three-day conversation about the challenges, innovations, shortcomings and successes of faith-based communication. The shifting location of the annual RCC convention each day brought attendees to the Interfaith Center, the Church of Latter-Day Saints Center, the Church Center for the United Nations and finally the St. Vartan Armenian Cathedral. Further, over a third of convention attendees were new members to RCC, bringing their own religious and sector diversity, to varying mixture of convention locations.

Despite its growing diversity, RCC members were reminded in the open remarks of Rev. Dr. James A. Forbes, Jr., Harry Emerson Fosdick Distinguished Professor at Union Theological Seminary, that communicators have difficult work ahead in responding to the association of faith with violence, hatred and injustice. While Rev. Forbes sees religion as garnering a bad name, he charged convention attendees with approaching their work with joy. He challenged the room to respond to the “Degenerative Discouragement Disease,” prevalent in American society today, asking communicators to find their prophetic voices and speak from conviction in their work.

This sentiment echoed in the plenary panel that followed, moderated by New York Times journalist Laurie Goodstein. The evening plenary “Many Paths and Even More Intersections: Navigating Multi-religious Activism” elevated the perspectives of religious leaders, academics, activists and CEOs. They came from diverse institutions, including Tanenbaum Center for Interreligious Understanding, Auburn Seminary, Georgetown University’s Berkley Center for Religion, Peace, and World Affairs, and the Arab American Association of New York. Linda Sarsour, executive director and Arab American Association of New York, was an intrepid voice, speaking from her perspective as an activist that has called for an end to unwarranted surveillance of New York Muslim communities and police policies such as stop and frisk. “We are either the victims of violence or the perpetrators of violence,” Sarsour asserted, referring to the ways the Muslim population is portrayed in mainstream media. “Where are the activists’ stories?”

“We are either the victims of violence or the perpetrators of violence…where are the activists’ stories?” — Linda Sarsour, Executive Director of the Arab American Association of New York

Sarsour’s frank prescription of religion and social justice in the United States was upheld through the evening’s last plenary, “Election Year and Beyond: Social and Political Activism in the City’s Black Churches.” At the heart of this discussion was the debate over who is welcome in the black church and to what extent is justice being served. Journalist Terrell Jermaine Starr questioned the place of African American LGBTQ activists in black church communities. Rev. Que English, co-founder of the New York City Clergy Roundtable and chair of the NYC Faith-based Coalition Against Human Trafficking and Domestic Violence, spoke of the significance of coalition building across race and power structures. Rev. English has devoted much of her energy to the amelioration of gun violence in New York City communities through dialogue with such diverse voices as police officers and gang leaders.

The evening concluded with the DeRose-Hinkhouse Memorial Awards Banquet, a commemoration of the work of religious communicators that demonstrate excellence in religious communications and public relations. The awards are named in honor of Victor DeRose and the late Paul M. Hinkhouse, leading lithographers in New York City. A senior religion fellow at the Sikh Coalition members of the Bahà’i National Center, and a communicator from an emerging online platform, deily.org,for interreligious discourse were among this year’s award winners.

The convention’s second day was filled with robust opportunities for stimulating panels and skill-based workshops. The morning began with “Re-imagining the Religion Beat,” moderated by Debra Mason, executive director of the Religion Newswriters Foundation. Reporters from the Associated Press and Religions & Ethics NewsWeekly spoke of the desire to synchronize the communication efforts of religious communities with the deadline culture of the newsroom so that more diverse, nuanced and accurate stories can be reported.

RCC members were able to further examine their communication efforts through a diversity of workshops covering such topics as social media, the coverage of women in the media, the religious “Nones,” the intersection of business and peacemaking, strategic writing, and blog development. One notable presentation was the plenary provided by Daniel Sieberg, head of media outreach for Google News Lab. Sieberg shared with attendees the unique capacities of search engines like Google to provide data useful for reporting, including interactive infographics to help communicators understand public engagement with politicians and televised political debates.

“If Jesus could say something in 140 characters, so can we.” — Rev. James Martin, S.J., Editor-at-large of America magazine

A pause in the day’s workshops allowed for Rev. James Martin, a Jesuit priest, editor at large of America magazine, and frequent guest on The Colbert Report, to moderate a discussion on religion and the arts. The panel showcased the diverse artistic talents of violinists Melanie Baker, filmmaker Hemal Trivedi, and Broadway actress Jeanne Lehman as they spoke of the role of faith in their professional artistic pursuits. Each speaker also addressed the significance of the arts in sacred spaces and rituals. Speaking from his own perspective as a writer, Father Martin spoke about the creativity that has been required in the wake of rising social media. During the Christmas season on Twitter, Father Martin tweeted all eight beatitudes in full to his followers and noted, that if Jesus could say something so important in 140 characters, so could we.

The convention’s last day focused particularly on international perspectives. United Nations representatives participated in a panel called “What’s Faith Got to Do With It? Faith Organizations, the UN and the Sustainable Development Goals.” Dr. Azza Karam, senior advisor on culture and social development at the United Nations Population Fund, moderated the conversation. Dr. Karam began asserting the benefits of the UN’s identity as a secular organization while also acknowledging the extensive role religious communities play in sustainable development, many doing so long before the UN existed.

The panel strove to understand the intersection of religion and development through the expertise of panelists Rev. Dr. Karin Achtelstetter, general secretary of the World Association for Christian Communications, Lt. Colonel (Dr.) Dean Pallant, director of the Salvation Army’s International Social Justice Commission, and Rudelmar Bueno de Faria, World Council of Churches representative to the UN and coordinator of the UN ecumenical office in New York. One insight echoed throughout the panel was the miscommunication of values and objectives between faith-based organizations, the media, and the UN. In particular, the demand on faith-based organizations to state their goals using either “religious language” or “secular language” was a topic of concern. Dr. Achtelstetter expressed that faith-based organizations must constantly consider how to rebrand themselves as the expectations the media and UN officials places on them are in flux.

“We are all developing countries; none of us are perfect.” — Rudelmar Bueno de Faria, World Council of Churches Representative to the UN

Former Archbishop of Canterbury Lord George Carey and Director of the Public Affairs and Religious Liberty Department at the Seventh-day Adventist Church Dr. Ganoune Dip shared the convention’s last formal keynote. Discussing “Intersections: Faith and the Global Community,” each speaker gave his own perspective on the changing religious landscape and the process of building agency across diverse individuals and institutions to create change. Lord Carey specifically reflected on the significant shifts that occurred during his tenure as archbishop of Canterbury, including the ordination of women priests and the move toward interreligious dialogue with neighboring Muslim communities.

The evening concluded with the celebration of the 2016 Wilbur Awards, recognizing excellence in communicating religious issues, values, and themes in the public media. Winning media included CBS Evening News with Scott Pelley’s “Football Nun,” Public Broadcasting’s “CHAPLAINS,” and CBS Sunday Morning’s “The Girl in the Picture,” narrating the future of a girl burned by napalm in the Vietnam War, her photo now synonymous with the Vietnam War atrocities.

“I’m glad you came,” is the last phrase Rev. Forbes used to welcome convention attendees Thursday evening. His statement reaffirmed the Religion Communicators Council’s convening capacity, where “gathering” is key to approaching the field’s biggest hurdles. As panelists, Wilbur Award winners, attendees, and practitioners continued to allude to, the best fulfillment of such gatherings comes when its lessons are actualized through change.