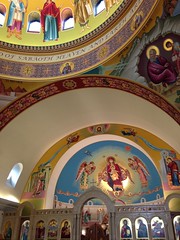 Founded in 1988, the North American Interfaith Network (NAIN) is “a non-profit association of interfaith organizations and agencies in Canada, Mexico and the United States.”  The focus of NAIN’s work has been to support the growth of interfaith understanding by supporting the work of its member organizations.  As such, NAIN chooses the term “network” to describe its work rather than institution, organization, or association.  NAIN has sponsored conferences, known familiarly as “Connects,” annually since 1996 for member organizations and affiliates.  These conferences, hosted by a local organization in a different city each year, provide an opportunity for member organization representatives and other affiliated students and professionals to discuss their involvement in the interfaith movement; share best practices and discuss challenges facing their organizations and the movement at large; attend workshops, panels, and other various informational sessions; and explore the religious landscape of the host city.

The 2014 NAIN Connect was held from August 10-13, 2014 in Detroit, Michigan. Hosted by the Interfaith Leadership Council of Metropolitan Detroit, the conference theme was “Bridging Borders and Boundaries,” and attracted over one hundred and fifty registered guests throughout the weekend.

Metro Detroit’s numerous treasures provided a number of opportunities for conference attendees to explore religious and cultural sites of regional and national significance, including the Detroit Institute of Arts, The Arab American National Museum, the Holocaust Memorial Center, the Charles H. Wright Museum of African American History. The 2014 Connect also included an ethnic tour of Hamtramck, and bus tours of Dearborn, as well as of Detroit’s involvement in the Underground Railroad.

The conference began on Sunday, August 10th with an opening ceremony and welcome dinner held at Wayne State’s McGregor Hall and Community Arts Auditorium. The Song and Spirit Institute, featuring Maggid Steve Klaper, a Jewish Troubadour, and Brother Al Mascia, a Franciscan Friar, provided the musical kick-off to the event. Rev. Dr. Daniel L. Buttry, Global Consultant for Peace and Justice with International Ministries of the American Baptist Churches, served as the evening’s plenary speaker. Rev. Buttry brought the crowd to its feet with his appeal to the interfaith movement to get “beyond the first date” and to strive for a deeper connection while engaging in interfaith work.

Monday morning the conference was in full swing, with two sessions scheduled before lunch. Conference attendees could choose between a number of different workshops and panels, including: “Exploring Values that Bridge Boundaries”; “The Next Frontier in Interfaith”; “Bridging Faiths and Healing Relationships with Labyrinths”; “Sharing metro-Detroit’s Interfaith Best Practices”; “Conversations on Pluralism: Share in the experience of the interfaith Cafe”; “Picking up the Pieces: Suburban mayors building community after the distress of segregation”; and two panels featuring NAIN Young Adult Scholars.[1]

Following the morning workshops, attendees ate lunch on the road and took bus tours of pre-selected sites within Detroit, including bus tours of Dearborn and Hamtramck.[2] The Hamtramck tour featured visits to a Jewish cemetery within the General Motors compound, a Zen Buddhist temple, a Polish Orthodox church and an opportunity to view “Hamtramck Disneyland,” an installment of eclectic local folk art by Dmytro Szylak, a long-time Hamtramck resident who immigrated to Detroit from Ukraine after World War II. Additional tours options included visits to the Arab-American Museum in Dearborn (the only one of its kind in the United States) and the Holocaust Memorial Center. NAIN Connect attendees could also choose a tour that detailed Detroit’s role in the Underground Railroad.

On Monday evening, the Islamic Center of America, also located in Dearborn, hosted the dinner and evening plenary presentation, entitled “From Hate to Hope.” Due to intensive rains and flooded highways, panelists for the evening presentation varied from those listed in the program. The weather also prevented full attendance.

Tuesday was another full day with workshop sessions in the morning and site visits in the afternoon. Workshop topics included: “Student Organized Workshop: Yes and !”; “Interfaith Adventures in Democracy: What would happen if every voice lifted, were heard?”; “Interfaith Challenges in Healthcare: Patient-care professionals share their experiences”; “Compassionate Community Building through Compassionate Cities and Compassion Games”; “Local Young Adult Organized Workshop: Spirituality and Meditation”; “Welcoming the Stranger: Building immigrant friendly communities”; “Inspiring our Young People: Passing the torch to the next generation”; “The Breadth of Interfaith Traditions: Exploring faiths together”; and “Be a Bias Buster: Help shape a cultural and religious competency guide.”[3] “The Power of Telling Interfaith Stories” with Lynne Golodner was cancelled due to washed out roads.

Afternoon site visits featured “Feet on the Street: Grown in Detroit,” a walking tour of Detroit’s emerging urban agriculture and unique local food vendors. A tour of “Detroit’s Cultural Treasures” included a visit to the Charles Wright Museum of African American History and the Detroit Art Institute.  There was also another opportunity to participate in the Detroit Underground Railroad tour.

NAIN Connect 2014 wrapped up on Wednesday with a half-day of programming. The morning included NAIN’s annual general meeting of member organizations and a plenary presentation of “Sacred Storytelling: A Play Created from Diversity Dialogues” by the Interfaith Round Table of Washtenaw County.  Planning for the 2015 NAIN Connect, “Restoring Spirit Through Sacred Listening,” slated for July 19-22, 2015 in Regina Saskatchewan, Canada. NAIN Connect 2014 concluded with a closing ceremony.

Amid and despite two days of torrential rain, NAIN Connect 2014 forged connections between North American interfaith leaders and highlighted Detroit’s assets—its cultural treasures, rich immigrant history, and complex religious landscape. The rationale for this focus was articulated in the conference program by NAIN Connect 2014 co-chairs Gail Katz and Paula Drewek: “When we were approached several years ago about hosting this NAIN Connect, our first thought was what a great opportunity this was to showcase the hidden gems that our Metropolitan Detroit area contains—gems that are never featured in the media.”

Among the attendees at NAIN Connect 2014 were fourteen recipients of NAIN’s Young Adult Scholarship, which provides a stipend for individuals between the ages of 16 and 35 to help defray the cost of attending the Connect. The 2014 recipients were: Ellie Anders, Esther Boyd, Mitch Connelly, Kiela Crabtree, Emily Farthing, Noorin Fazal, Adam Gerstenfeld, Jack Gordon, Margaret Evans Koella, Cody Musselman (who filed this report), Seán Rose, Andrew Skinner, Liza Veilleux, and Wendy Webber. Young Adult Scholars participated as panelists in two discussions that addressed a range of topics, including personal journeys to interfaith work, personal definitions of interfaith, the challenges of and potential solutions within interfaith work, and the future of the interfaith movement. The Young Adult panels have become annual fixtures of NAIN Connect and highlight the perspectives, experiences and insights of emerging interfaith leaders. Other events, such as an ice cream social and an Interfaith Youth Core (IFYC) “Better Together” breakfast, offered additional opportunities for young adults to connect with each other and share ideas. NAIN hopes to continue its support of young adult presence at each Connect through this scholarship opportunity.

[2] According to the Arab American Institute, Dearborn is a city where roughly one in three residents claims some Arab heritage (“Michigan Detailed State Profile.” The Arab American Institute.) Hamtramck, a densely populated and religiously diverse city within the city of Detroit, made headlines in 2004 when controversy erupted over a request to the city that mosques be allowed to publicly broadcast the call to prayer.