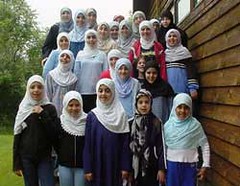 Muslims in America are an extremely diverse group. There are immigrant Muslims from Asia, Africa, and the Middle East. There are the second and third generation Muslims who have lived their entire lives in the United States, and up to 40% of American Muslims are African-Americans. Whatever their background, all Muslims face a common challenge: encouraging their children to practice Islam in a society often dominated by Christianity and the mass media. The majority of Muslim children attend public schools and watch the same television shows and movies as other American children. This can make it difficult for parents to teach their children about Islam and Muslim values. To respond to this challenge, mosques and Islamic centers across the country have started Boy Scout and Girl Scout troops that provide recreational programs for children while also incorporating elements of the Muslim faith.

Muslim Boy Scout and Girl Scout troops belong to the national Boy Scouts of America and Girl Scouts of the USA organizations but are sponsored by mosques and Islamic centers and have exclusively Muslim membership. The troops allow children to learn about their religion and culture and meet other kids from similar backgrounds. The troops mix traditional scout activities with ones that are designed specifically for Muslim children.

Currently there are 112 Islamic Boy Scout, Cub Scout or Venturing Crews. The Girl Scouts of the USA do not keep statistics on the number of Muslim troops but news articles have appeared about them in Boston, Detroit, Minneapolis, Chicago, Brooklyn and Portland publications. The Muslim Scouts of Michigan based in Dearborn state as the mission for their Girl Scout Troop:

Muslim youngsters of Muslim Girl Scouts build character and skills for success in life. Girls develop qualities such as strong Islamic values, social conscience, and conviction about their own potential and self-worth. They learn to be loyal, honest, considerate, caring, unselfish, courageous, cooperative, responsible, courteous, and respectful Muslim leaders following the steps of our Great role-model Sayyida Fatima AlZahraa.

By comparison the Girl Scouts of the USA website states “Girls develop strong values, leadership skills, social conscience, and conviction about their own potential and self-worth that will serve them all their lives.” These mission statements share many of the same elements, but Muslim scouts add the add Islamic values and models to their scout programs.

In addition to the Islamic education offered by the scout troops there are practical reasons for establishing all-Muslim troops. In Minneapolis the benefits of an all-Muslim Girl Scout Troop presented themselves during a camping trip. Because the girls all wear the hijab (head scarf) the troop leader knew to reserve a private swimming area where the girls could remove their scarves to swim. The troop leader also bought halal marshmallows to make S’Mores. These important details might get overlooked if a Muslim girl were in a predominantly non-Muslim troop.

In Brooklyn the Muslim Daisies troop focuses on teaching girls about patriotism and leadership. The Brooklyn troop learned the correct way to fold an American flag and featured discussions on saying the pledge of allegiance. The theme of empowerment runs strong in this troop. Many of the girls are daughters of immigrants and their mothers often attend with them. Mothers remark that they like their daughters to take advantage of opportunities they never had. The troop also features unique activities such as a fashion show demonstrating ways to wear the hijab and Islamic fashions from around the world. Scout activity is so respected in the Muslim community that the popular Muslim doll, Razanne, comes in a Muslim Scout model.

In Boston the Islamic Center of New England in Sharon and Quincy sponsors six Scout Troops for girls and boys. The Boy Scout troop meets weekly and participates in traditional activities like go-carting, attending baseball games, and hiking. The troop also does activities which distinguish them from non-Muslim troops such as using a compass to determine the qibla (direction of Mecca). Members of the troop also pray five times per day as prescribed by Muslim law.

An important aspect of scouting is earning merit badges. There are several merit badges created especially for Muslim scouts. For Cub Scouts grades two through five there is the Bismallah Emblem. To earn this a scout must study the holy books, the great prophets, prayers, pilgrimage, holidays, mosques, Muslim heroes, and write a report on a great American Muslim. Boy Scouts can also earn the In the Name of God Emblem. This requires more in-depth study of issues important to the Muslim faith such as monotheism and prayer.

For generations Boy Scouts and Girl Scouts have pledged “to do my duty to God and my country.” Today thousands of Muslim children across the country pledge “to do my duty to Allah and country.” They comprise a tiny fraction of the scouting population, but their influence reaches far beyond their numbers. They provide an example of how faith communities can pass along their religion and values to their children in a way that is fun and educational.