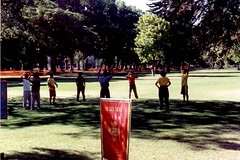 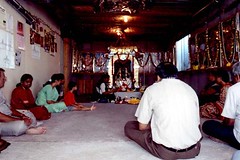 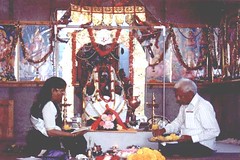 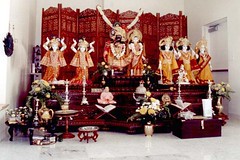 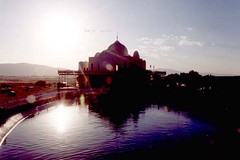 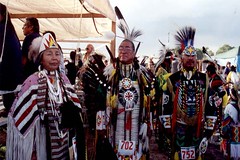 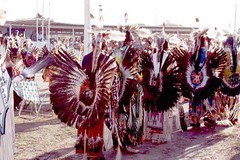 The state of Utah as currently constituted was founded by a group of sectarian exiles from the then boundaries of the United States in a microcosmic recapitulation of the European settling of the Atlantic Seaboard. Utah has maintained much of its original identity, while incorporating in recent decades an increasingly diverse group of inhabitants. Numerically the state remains predominantly Mormon. According to the 1997 Almanac of The Church of Jesus Christ of Latter-day Saints, by the end of 1997, there was a total population of 2,038,000 in Utah, 1, 551,000 (76 percent) of whom were members of the Church of Jesus Christ of Latter-day Saints (LDS). For a broader perspective on the size of the LDS Church, membership data collected by December 31, 2000 indicates a worldwide membership of 11,068,861, with 5,208,827 living within the United States and 5,860,034 living outside the U.S. Fifty-three percent of members are female, and forty-seven male.[1] While the LDS Church is rapidly expanding and becoming increasingly international, church headquarters are in Utah, and to live in Utah means to live among members of the LDS Church.

Perhaps due in part to an early history of intense persecution (including two state civil wars in Missouri and Illinois), members of the LDS Church have historically tended toward insularity. This tendency has contributed to a complex dynamic between LDS practitioners and those who live in predominantly LDS communities but do not belong to the church.

Since becoming President of the LDS Church in 1995, Gordon B. Hinckley has encouraged members of the Church of Jesus Christ of Latter-day Saints, both on an institutional level and as individuals, to be less insular. As recently as April 2001, at a General Conference broadcast by satellite to church members throughout the world, he said:

“We are not without critics, some of whom are mean and vicious. We have always had them, and I suppose we will have them all through the future. But we shall go forward, returning good for evil, being helpful and kind and generous. I remind you of the teachings of our Lord concerning these matters. You are all acquainted with them. Let us be good people. Let us be friendly people. Let us be neighborly people. Let us be what members of The Church of Jesus Christ of Latter-day Saints ought to be.”[2]

President Hinckley’s statement reveals both a prevailing impression that Mormons are still disliked by many in the world and an exhortation to members not to allow this prejudice to alienate them from people outside of their religious community. In addition to individual efforts to follow President Hinckley’s instructions, institutional attempts to follow his guidance include substantial donations toward the building of non-LDS religious structures in Utah, including $25,000 toward a Hindu temple under construction near Salt Lake City and $25,000 for an International Society for Krishna Consciousness (ISKCON) temple that has been nearly completed in Spanish Fork.

There are several important non-LDS groups with communities in Utah. I encountered them during private interviews and visits to religious gatherings in the summer of 2001.

Since its beginning in 1994, the Hindu temple in greater Salt Lake City has been in Indra and Neale Neelameggham’s basement at 9859 Dream Circle, South Jordan, UT 84095, (801) 253-3592. The new temple is to be built on a 4,000-square-foot site. A special foundation-laying ceremony was held on Oct. 27, 2001. For current construction reports and schedules of activities see: http://sriganesh.faithweb.com.

One of the first things each Hindu told me about their temple plans was that the LDS Church contributed $25,000 to the building and was instrumental in helping them to find the land. They’ve received higher contributions than that from other donors (many in their own community), but mentioned only the LDS contribution to me as I asked about their temple construction plans. At the time, they did not know that I am a member of the LDS Church. Their tendency to emphasize this fact reveals the importance in Utah of defining one’s relationship with the Mormons.

Indra, who is the temple president, reports that the reason Hinduism has lasted 2500 years is because Hindus are very good at adapting to new cultures and communities. By August of 2001, there were approximately 3,000 Hindus along the Wasatch Front, which extends 100 miles long, beginning north of Salt Lake in Ogden and stretching south to Spanish Fork. Indra and her friend, Bama, were two of the first Hindus in the area. Originally they say people came to Utah because of economic opportunity – universities for academics, as well as software and pharmaceutical companies for others. They also mentioned that the cost of living is much lower than in Boston or the Bay Area, and the mountains are beautiful.

The success of Spanish Fork’s Hare Krishna followers is due in large part to extensive community outreach by Caru Das and Vaibhavi Devi, the leaders of the group. For years Caru and Vaibhavi Devi have invited and advertised to the Utah Valley Community when planning festivities for their holy days. By the year 2000, 4,000 people were attending their annual Festival of India Celebration. The Llama festival is another for which they garner impressive attendance.

The Sri Sri Radha Krishna Temple is located at 8628 South Main Street Spanish Fork, Utah 84660, (801) 798-3559. Every Sunday people from outside the permanent community (both friends and new-comers) attend services at the temple and enjoy a vegetarian meal with them from 5 to 7 p.m. Many attendees come directly from LDS Church services, still in their “Sunday best” dress. The instructional portion of the Sunday sermon when I attended focused on common beliefs between Hindus and members of other traditions. Caru taught that Krishna is the same as the God of the Old Testament and the Qu’ran. When discussing a scriptural passage, Caru compared the sentiments therein to teachings of Jesus. At the end of the service, Vaibhavi Devi mentioned that the day before a ward (the term used to refer to an LDS congregation) had spent 5 hours helping them with construction of the temple and encouraged all the Latter-day Saints present to consider helping with construction of the temple for their congregational service projects. Later Caru told me the temple had been constructed almost entirely by their community of only six and Mormon neighbors. He estimates about 3,000 hours of volunteer time thus far.

The numbers that visit the ISCKON community are astonishing in light of their current membership; there are currently six permanent members of their community. The current temple has been open since June 23, 2001. Caru and Vaibhavi Devi first came to Utah because the airtime they rented from a radio station in San Francisco was too expensive, so in 1982 they purchased a radio station outright in Spanish Fork, Utah. For more information on local festivals and temple construction, visit: http://www.utahkrishnas.org/general-information/.

The Boomans (pronounced Bowman), a retired Bahá’í couple, have people over to their house every Friday evening to tell them about the Bahá’í faith. Many LDS students from Brigham Young University drive up to see them. There are between 350 and 400 Bahá’í in the state with around 80 in Salt Lake City.

About half of the members in Salt Lake are Persian and left Iran during the post-revolution discrimination under Khomeini. In West Valley there are many Tongan, Hispanic, and Black Bahá’í.

Forrest Cuch works with Tribal Governments and is the official Director of the Utah Division of Indian Affairs. According to Forrest, Native American interactions with Mormons historically and currently have had overall a detrimental effect on his people. He labels the most egregious problems now as cultural genocide and institutional racism – his people and history are made to be invisible; they become dehumanized and erased.

Cuch cites as an example the fact that rural schools, where many Native Americans reside, are directed by Latter-day Saints and exert tremendous power and influence on young Native Americans. Students get negative messages in school that their people have no history, are uncivilized, and stand in the way of progress. The answer to their social ills is to join the church. There is currently a 60-80% high school dropout rate and 60-70% rate of unemployment.

Forrest says, “The strongest Indian people (healthiest Indian families) are adaptive – they’ve taken the best from traditional culture and the best from the dominant culture.” Those who participate in the pow wow are better educated and employed. They practice traditional culture. Many either belong to the Native American church and use peyote in their worship, or they practice high plains spirituality (sweat lodge, sun dance, and other ceremonies). Sometimes they practice these things in addition to a more formal, organized religion.

There are five main tribes in Utah – 3200 Utes, 8000 Navajo, 800 Paiute, 450 Shoshone, and 300 Goshute. The Goshute tribe has recently received national attention under Leon Bear’s leadership as they agreed to allow nuclear waste to be stored on the Skull Valley reservation. For more information on Native Americans in Utah, visit:
https://historytogo.utah.gov/utah_chapters/american_indians/nativeamericansinutah.html

Beverly Clark was born and raised in the Mormon faith, but spent 12 years searching for a clearer version of truth after serious illness and a difficult marriage. Beverly understands her quest as a close parallel to the truth seeking of Mormonism’s founding prophet.

Inspired by Joseph Smith’s example of going directly to God for guidance, Beverly did the same and was led to Falun Gong. She saw a picture in the newspaper of two Chinese students practicing Falun Gong in Salt Lake’s Liberty Park, and learned that (according to pro-Falun Gong sources) the organization had grown by 100 million members in 7 years. So Beverly decided she needed to investigate in July 1999. Now Beverly is Falun Gong’s greatest advocate in Utah. There are currently 9 regular participants in their community. Several of them are Chinese, and one retains his affiliation with the LDS Church. Every Saturday morning, they exercise together in Liberty Park.