Getting the Balance Right: A Diversity of Responses to the 10 Commandments Debate (2005) 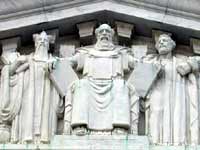 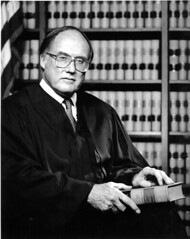 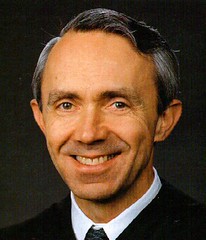 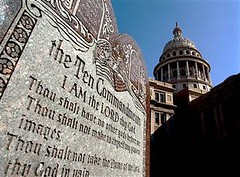 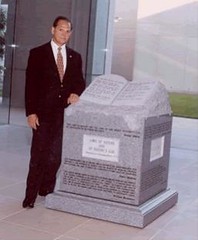 In the past three years the state and federal courts have witnessed a flurry of cases concerning religious displays on state or public property. Central to these cases has been the question of whether publicly displaying the Ten Commandments violates the First Amendment of the US Constitution. This Amendment and its Establishment Clause guards against the establishment of a state religion or against impeding the right of an individual to practice in the religious manner of their choice. In 2005, two defining cases (McCreary County v. ACLU of Kentucky and Van Orden v. Perry) on this issue were heard before the US Supreme Court, with final decisions handed down on June 27, 2005.

The court ruled in favor of the state in Van Orden v. Perry. In this case, the Fraternal Order of Eagles (FOE) had gifted a “6-foot-high monolith inscribed with the Ten Commandments” to the state of Texas in 1961. The monolith was associated with an acclaimed national campaign by the FOE aimed at reducing juvenile delinquency through publicization of the Ten Commandments and its admonitions against theft, murder, and the like. “Based on the recommendation of the state organization that maintains the capitol grounds,” the monolith had been placed on the grounds of the state capitol, among 21 historical markers and 17 monuments.

In this case, the presence of the monolith on state capitol grounds was objected to by Thomas Van Orden, an unemployed lawyer seeking an injunction requiring their removal on the grounds that they violated the Establishment Clause. The placing of the monolith on the Texas capitol grounds, however, was found and affirmed by lower courts to be “a valid secular purpose in recognizing and commending the Eagles for their efforts to reduce juvenile delinquency.” Further, the Supreme Court held that a “passive monument” such as the one found in Texas is consistent with a tradition dating “from at least 1789 …of official acknowledgement by all three branches of government of religion’s role in American life.” Significantly, it held that, “simply having religious content or promoting a message consistent with a religious doctrine does not run afoul of the Establishment Clause.” Thus, with Van Orden the Supreme Court signaled its desire to both not impinge on religious freedom through excessive restriction on its expression and a desire to not “evince a hostility to religion.”

The Fraternal Order of Eagles and the impact of Van Orden v. Perry

Central to the debate around the placing of the Ten Commandments on state –owned property are the actions by the Fraternal Order of Eagles (FOE), a charitable organization describing itself as dedicated to “Liberty, Truth, Justice, and Equality.” The FOE have been noted for their civic efforts over time, and were even noted in Justice Steven’s dissenting Van Orden opinion as, “a well respected benevolent organization whose good work [has] earned the praise of several Presidents.”

During the 1950s and 1960s, the Fraternal Order of Eagles erected as many as 4,000 markers, statues, and monuments featuring the Ten Commandments in public parks and government buildings as part of a campaign against juvenile delinquency. Some of these dedications included the participation of the actors and director of the 1956 film, The Ten Commandments.

In recent years, the constitutionality of these monuments has been challenged across the country, forcing their removal from a number of public sites. Presumably, the Van Orden ruling will reverse this trend. FOE Legal Advisor George Miller notes that the decision can, “serve to remind us to redouble our efforts in the spirit of charity.” What remains to be seen is whether the Van Orden case will now be used to defend FOE monuments in other locations.

Where do Americans stand on the Issue?

According to an article on Religioustolerance.org, a CNN/USA Today/Gallup poll was taken in February 2005 asking the question: “Do you believe that it is proper or improper for the Ten Commandments to be displayed in a government building?” Based on the poll, it was concluded that:

The margin of error for the poll was held to be +/- .5 percentage points.

As might be expected, there is no shortage of groups which have offered opinions on the Ten Commandments cases. A number of Amicus (“friend-of-the-court”)Briefs—representing a diverse range of political and religious views—were filed with the Court expressing a number of views on these cases. Other groups undertook other activities such as public service campaigns to express their views on the issue.

The HAF, representing Hindus, Jains, and Buddhists in America, filed its first Amicus Brief on the Ten Commandments issue in relation to Van Orden v. Perry. Their brief states that the existence of a Ten Commandments monument on Texas State Capitol grounds is an endorsement of Judeo-Christian law, which is not upheld by the establishment clause and is potentially hostile to non Judeo-Christian traditions. They argue that although the monument has stood on the State Capitol grounds for nearly forty years it “violated the Establishment Clause forty years ago and continues to do so today.”

The ACLU has played a very prominent role in issues of religious freedom in recent years, and figured heavily in the cases before the Supreme Court. The ACLU of Kentucky served as respondents in McCreary County v. ACLU of Kentucky. They argued that, “the Ten Commandments are inherently religious,” and that they “are central only to the Jewish and Christian faiths.” They also argued that the use of language from the King James Bible further underscored a specific intent and endorsement of a particular religious text, and that the use of the Protestant King James version indicated an exclusivity not even shared among all Christians. Finally they argued that the litigation history of the case indicated that the county’s actions “had the effect of endorsing religion.”

The Foundation for Moral Law, the non-profit established by former Alabama Supreme Court Chief Justice Roy Moore to promote “the Godly foundation of the United States of America…and assist in re-establishing society… with values as set forth in the Holy Bible,” also filed Amicus Briefs with the court for McCreary County v. ACLU of Kentucky and Van Orden v. Perry. The briefs of this group are significant in that they are representative of a burgeoning Christian political movement in the United States. Moral Law’s founder is a veteran of this movement who achieved national prominence with his placing of a stone Ten Commandments in the Alabama Courthouse, and his refusal to remove them when ordered by a District Judge. In so doing Roy Moore has evolved into an emotive political figure who has elicited comparisons with George Wallace. In both briefs the Foundation for Moral Law held that the Ten Commandments displays were not tantamount to “law respecting an establishment of religion” and as such did not violate the First Amendment. They also held that prior tests of the establishment clause veered from a strict interpretation of that clause as written in the constitution and were thus “judicially fabricated.”

The more prominent groups representing Jewish perspectives on the issue argued against the display of the Ten Commandments on government property. Among their primary arguments were that the Ten Commandments are “intensely sectarian statements” and are not appropriate to be displayed “where citizens of many faiths and of no faith convene daily to seek justice, an audience for their concerns, and services from their government.” The AJC describes its position as motivated by its support and defense of “church-state separation as the surest guarantor of religious liberty for all Americans.”

Americans United for Separation of Church and State

Americans United filed two Amicus Briefs with the courts, arguing “that all the displays amounted to government promotion of religion in violation of the First Amendment principle of church-state separation.”

The First Amendment Center called the decisions “messy but wise” in that they clearly sent the message that political groups and their leaders should not seek to “to promote a religious message in the guise of ‘historical displays.’ And the freedom-from-religion crowd will need to rethink its plans to sue for removal of any and all government monuments or plaques with religious content — regardless of age or intent.” It also hailed the case-by-case approach taken by the court, which it described as appropriate for the issue of church-state separation, and “the best we can hope for in a pluralistic democracy.”

The Muslim community has been notably quiet on this issue, but is nonetheless concerned not to be perceived as indifferent. Most material on the issue relates instead to correlation between the Ten Commandments and Islamic teaching, such as an op-ed posted by the Council on American–Islamic Relations (CAIR) which offers a side by side comparison of the various commandments with Qur’anic verses. Notable amid the various strong positions held by other groups, the Muslim community appears to have a very balanced view: “love all the commandments, for their values are my values as a Muslim. I also respect the Constitution and its support for religious pluralism. Just as I want my government to not establish a particular religion, I also desire that they not prohibit its free exercise. It is a delicate balancing act.”

It will be interesting to observe the fate of existing FOE monuments now that Van Orden v. Perry has affirmed their right to exist on state property within certain contexts. It will also be interesting to observe how other non-Judeo-Christian groups proceed, and whether they will take Van Orden v. Perry as a green light to insist on the inclusion of their sacred texts on government property.

With McCreary County v. ACLU of Kentucky and Van Orden v. Perry and the issue of the public display of the Ten Commandments behind us, the issue of religious freedom nonetheless continues in other venues. A notable case that is currently evolving regards the use of the Qur’an in court for swearing in witnesses, and whether denying witnesses the opportunity to use scriptures other than the Bible is a violation of the establishment clause. The debate on religious freedom rages on, with viewpoints as diverse and global as the practice of religion in America itself.

The Fraternal Order of Eagles (FOE)