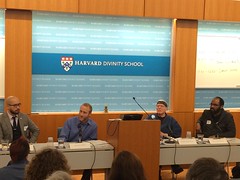 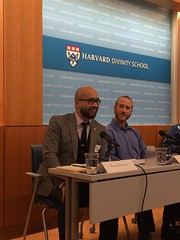 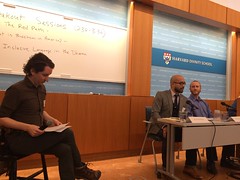 On March 6, 2015, the Harvard Buddhist Community (HBC) hosted a conference on Buddhism & Race in America. The conference was organized by Darren Becker and Christopher Raiche, both Master of Divinity students at Harvard Divinity School (HDS) and HBC co-leaders. Becker and Raiche’s inspiration for the conference emerged from a seminar taught by Professor Cheryl Giles, Francis Greenwood Peabody Senior Lecture on Pastoral Care and Counseling at HDS, called “Buddhism, Community, and Diversity: The Color of Practice.” The conference consisted of a morning panel on “Intra-Sangha Race Dynamics,” an afternoon panel on “Buddhism, Race, Structures, Society,” and breakout sessions led by several of the day’s panelists.

Nearly 100 people participated in the conference, and more than half of the participants were not Harvard affiliated. The conference was sponsored by the HDS Buddhist Ministry Initiative, the HDS Student Association, and the HDS Diversity Fund.

“I didn’t come here to be comfortable.” – Bryan Mendiola

Darren Becker opened the conference with a welcome that called on the transformative power of insight and urged participants to “treat one another with respect, speak with courage, and challenge each other with compassion.” The morning panel on “Intra-Sangha Race Dynamics,” facilitated by Christopher Raiche, focused on resources for “sanghas to become incubators of a durable, worldly compassion.” Panelists took stock of strategies, approaches and attempts made to bring the topics of racism and white privilege to bear within their communities of practice.

Raiche honed in on panelists’ personal experiences of working with and through these issues. Bryan Mendiola described his path to leading bi-monthly meetings at Shambhala Boston on meditation, identity, and culture: “People were starting to come to me with issues of diversity and discrimination in the community. We spent time being confused together, angry and sad together. Regular meetings developed out of that, to present on issues of multiculturalism and learn from each other.” This opportunity for Mendiola in his community, however, came after experiences in other local communities that were not as open to him bringing these issues to the fore.

Harrison Blum, Lama Rod Owens, and Bryan Mendiola all expressed ambivalence about the growing number of groups and events specifically for people of color within predominantly white communities of Buddhists. Owens underscored the potential for majority white sanghas to use people of color groups as an excuse, acknowledging “When we use words like ‘racism’ and ‘diversity’ we place the burden on people of color and people who represent difference. Instead, I use the language of looking at what whiteness means and what white privilege has done with the world.” Likewise, Roshi Sings-Alone advocated for a sense of “radical oneness” that brings people together, but warned, “I’m becoming more and more painfully aware that we don’t reach out in oneness.” Owens affirmed that the ultimate goal of people of color groups must be to integrate into a whole sangha.

Both Mendiola and Blum drew parallels between the way that racial and gender equality has been talked about in North American Buddhist communities. “There is a unique experience of truth that people of color have, just like there is a unique experience of truth that women have,” Mendiola explained, “White people can respond, ‘I’m missing something about truth.’” With some ambivalence, Mendiola suggested this as something like an incentive for white people to actively do the work of confronting white privilege as “a dangerous mental structure” (to use Blum’s words). Audience questions invited conversation about how to understand the different responsibilities of white people and people of color in this process. Each of the panelists advocated for humility, vulnerability, and inclusivity as qualities and practices to keep close at hand during this difficult work.

“This is the place where we can grapple with the deeper dimensions of this planet, with each other and with the rest of our creation.” – Donna Bivens

The afternoon panel, convened by Becker, addressed foundations in practice and principle that Buddhist traditions can offer to mainstream discourses of structural racism in American society. Emphasizing the institutional elements of racism, each panelist approached this set of questions from a unique perspective. Anushka Fernandopulle reflected on her work with organizations in the tech-world, citing the need to bring greater awareness to the impact new technologies have on the ways that we live, interact, and practice. She commended the fact that many institutions are beginning to statistically measure unconscious biases in the way they work and expressed the possible contribution that Buddhist practices of mindfulness could make to institutions engaged in this process of uncovering prejudice.

Rather than exploring a Buddhist contribution to discourse, Hallisey challenged participants to consider what Buddhism can become because of its encounter with race in the United States. He cited Buddhism’s continuing processes of transformation in its interactions with other countries and cultures as a call for Americans to imagine the kind of “institutions [that] will be adequate for the futures we aspire to.” Perhaps this could be rendered by the truism, new relationships generate new possibilities. In this vein, Roshi Sings-Alone told the story of a delegation of Japanese Buddhist monks and one nun that participated in the “Longest Walk” from San Francisco, CA to Washington, D.C. in 1978, alongside members of different Native tribes.[1] Hallisey affirmed, “human difference shows us realities of perfection that are hard for us to see in our own particularity.” Panelists and audience alike agreed that working together and interacting with others, especially when it is uncomfortable and difficult, is key to transformation.

Though not a member of the Buddhist community, Donna Bivens spoke of Buddhism as a “generous tradition” with teachings and practices that resonate with Dr. Martin Luther King Jr.’s cycle of the Triple Evils (poverty, racism, and militarism) and with scholar Joyce E. King’s description of “dysconsciousness” as “an uncritical habit of mind… that justifies inequity and exploitation by accepting the existing order of things as given.”[2] As Becker urged the panelists to imagine what models of “fierce compassion” could look like, Bivens responded, “compassion is honoring our own experience and going through the hard work of honoring other people’s experience. It is never finished.” Fernandopulle echoed this two-sided responsibility of Buddhist practice, citing the Five Precepts (to refrain from killing, taking what is not given, sexual misconduct, incorrect speech, and intoxication by alcohol or drugs). Her examples included the ideas that not killing also requires one to protect life; not being greedy requires one to practice generosity. Participants expressed a sense of urgency to cultivate and share these attitudes and apply them on both individual and institutional levels.

After the two panels, breakout sessions gave participants time to focus in smaller groups on different issues that came up throughout the day. Roshi Sings-Alone led a group on the Red Path, integrating Native American spiritual practices and Zen Buddhism. Mendiola organized a group to discuss “What is Buddhism in America?” Owens brought together a group to consider how to use inclusive language in teaching dharma, and Bivens convened a group for people of color to discuss themes of wisdom, compassion and suffering. Coming together after the breakout sessions, the tone of the panelists and participants was determined. This first conference on Buddhism and Race in America seemed a remarkable beginning to what participants identified as a necessary conversation. Afterwards, Becker expressed his growing confidence that “scrutinizing oppression and marginalization are fundamental Buddhist practices—we can see our selves better by understanding what’s happening outside of us in wider social constructions.” Calls for the conference to become an annual event at HDS were met with gratitude and support