Bowling Green, KY and The Nascent Stages of Religious Diversity (2013)

In 1979, the city of Bowling Green, Kentucky was designated a refugee resettlement site in the United States.  Since the initial beginnings of refugee resettlement, many diverse populations have established themselves and their cultures in the south central Kentucky area.  As these immigrant populations continue to grow, many form their own religious centers, while others struggle to maintain their religious traditions in a new context.  At this time, the immigrant religious communities who have formed a center in Bowling Green have done so on the geographic periphery of the city. This trend reflects what one practitioner described as an attitude of an “arm’s length’s tolerance” exhibited by the broader community toward these new neighbors.

Yet, the religious communities of Bowling Green, whether a newly established Buddhist monastery or a church within the Protestant Christianity majority, reinforce shared cultural identities that may extend beyond religion. Religious communities provide a gathering space for people (often immigrant populations) with shared backgrounds, language, celebrations, and customs.  Many emphasize education, rituals, and knowledge as a means to pass on their cultures to their children.[1] As one study proposed, “religious institutions were among the most important resources that immigrant groups used to reproduce their ethno-religious identity in new surroundings and to help them adjust to the challenges of surviving in a demanding and often threatening environment.”[2] Even for those communities which are not necessarily comprised of immigrants the idea of shared values, experiences, and identity is of utmost importance. A member of  Am Shalom, the sole Jewish congregation in Bowling Green, describes: “that recognition, that immediate sense of being connected to somebody who has some sort of shared past with you. Even if it’s all in your head, there’s just that cultural reference. And that’s probably true of any immigrant.  So there’s some of that quality of being an immigrant, even in your own country.”

In 2001, Professors Larry Snyder and Thomas Russell, affiliates of the Harvard Pluralism Project, documented what they referred to as an “almost unperceptible transformation” occurring within the religious landscape of the “Bible Belt” area. 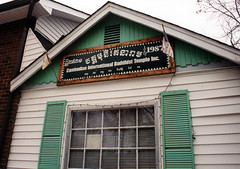 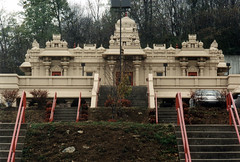 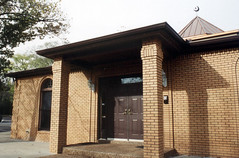 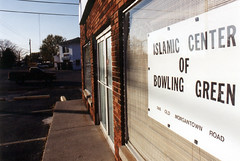 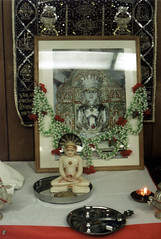 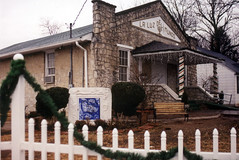 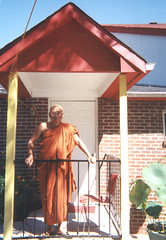 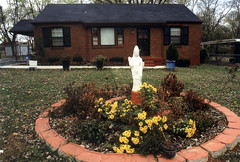 Vietnamese Temple (TN)
In the 2001 report, little more than a store-front gathering space for a small but growing Muslim community and a small Jewish congregation were reported as existing in the Bowling Green region. Slightly more than a decade later, the transformation of the religious landscape is more apparent—if one is paying attention. Today, Bowling Green is uniquely emerging as a small but growing hub of religious diversity in a region historically known for its plethora of Christian churches.  The city is home to two Islamic centers, two Buddhist monasteries, a small Jewish community, a growing Unitarian Universalist congregation, and an eclectic group that might be referred to as a community of “religious nones.”

The two Buddhist monasteries, Jewish congregation, and the community of “religious nones” can be categorized into Stage 1 of development. Stage 1 religious communities are characterized by membership predominately consisting of original immigrants, religious “services and activities [which] are naturally dominated by the language and clergy from the old country.”[5]  The Buddhist communities, both of which formed in 2010, consist primarily of resettled refugees and are led by immigrant monks. The monasteries are located on the edge of city limits, in residential homes that are difficult to find unless one knows exactly where to explore. At one time, there was one monastery that served the entire Buddhist population of the Bowling Green area, but a split led to the formation of a three separate Buddhist monasteries. In 2013, one of the monasteries closed due to unknown reasons. The remaining two monasteries serve Cambodian and Burmese Buddhist communities, respectively. Both groups are numerically small (20-30 attendees), and the monasteries are difficult to contact, with no readily publicized phone number or contact email.

The group of “religious nones” consists of pagans, Wiccans, faith healers, Jews, atheists, as well as members of other religious identities.  There has been an intensified interest in the  “religious nones” in recent years.[6]  This research has found that many of the “religious nones” maintain religious beliefs but choose not to identify with an institutionalized or organized religious community.[7]  In Bowling Green, a group with these characteristics meets regularly but has no leadership, physical space, or online presence. I would classify this group to be also in Stage 1 and it may never develop any further. As one member suggested as much, noting that organization is antithetical to the values of the group.  While there is no established religious creed or dogma that guides the group, the community celebrates various religious holidays and incorporates multiple religious symbols into its gatherings. Whereas the Unitarian Universalist congregation attempts to synthesize diverse religious values or ideas, the community of religious nones feels no need to do so. 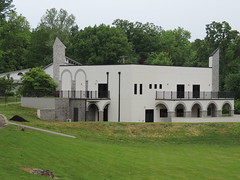 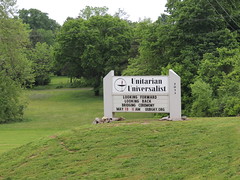 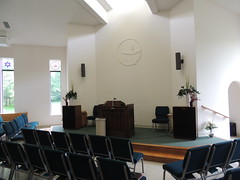 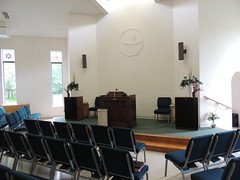 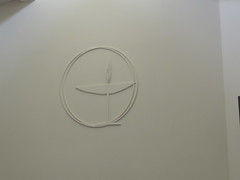 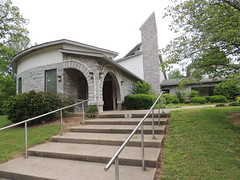 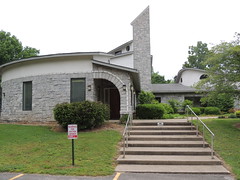 Unitarian Universalist Church (Bowling Green, KY)
Members pride themselves on the group’s organic structure; some members feel that attempts at more organization might be counter to the group’s nonstructural history. Although numerically small (programs generally attract between 35-70 attendees), the group takes advantage of its inherent religious diversity. As one atheist member explained:

I have an appreciation for religion. A lot of people kind of think this is weird, but I believe religion is a good thing for society and community whereas other people say organized religion is the downfall of everything. You just have to have eternal spirituality and that’s what makes it.  But I happen to think that groups of people identifying under a certain sort of religion is a good idea.  It builds community. It creates some sort of faith in something.  So I like them all. Even though I don’t believe, I practice all of them.  So at an Equinox party, we also celebrate Rosh Hashanah, Passover, Easter and Christmas – all of those things.

The Jewish community in Bowling Green, known as Am Shalom Congregation, is also relatively small. Formed in the late 1990s, the community today consists of 13 to 14 families and meets on High Holy Days in the basement of the Presbyterian Church of Bowling Green.  Low numbers and the lack of a local rabbi are constant challenges. Many Jewish people travel to synagogues in Nashville, Tennessee where more established congregations provide instruction and education to the Jewish community in the I-65 corridor.

The Islamic and Unitarian Universalist communities are more established in terms of their visibility in Bowling Green and can be classified as being within Stage 2 of development. Communities within Stage 2 are characterized by having members that are both immigrants and native-born; starting the cultural assimilation process; possessing a bilingual religious leader; and beginning recruitment efforts.[8] The Unitarian Universalist Church of Bowling Green was formed in 1961 with seven members. Today, the community has a full-time minister and a congregation of nearly 125 people. Weekly services and several small group meetings take place at a beautiful facility near the campus of Western Kentucky University which includes a worship space, educational rooms, and a fellowship hall.  Several staff, faculty, and students from the University are among its diverse members, which includes people claiming a range of religious identities.

The Muslim population of Bowling Green has grown rapidly since the 1990s when the region became a resettlement area for Bosnian refugees. 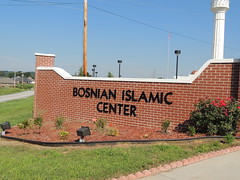 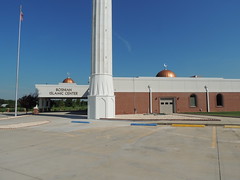 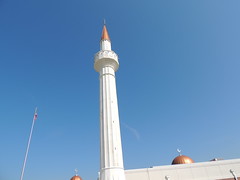 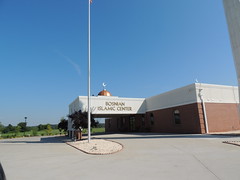 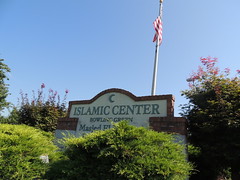 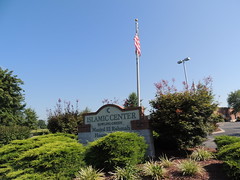 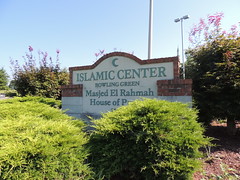 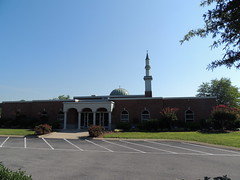 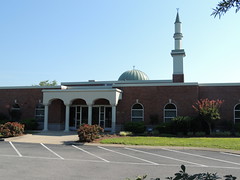 The limited collaboration between faith communities in the area is directly related to Mullins’ development life-cycle hypothesis.  Since many of the religious communities discussed herein are in early phases of establishing themselves in the region, it is likely that much of the energy and focus of these communities is directed internally. The early phases of development simply preclude organizational attempts to collaborate.  At the same time, some individual members bridge the divide by attending more than one religious community.  For instance, a Jewish member might attend Am Shalom congregation on Friday or Saturday and the Unitarian Universalist Church of Bowling Green on Sunday.  Or a person might attend Bible study at a local Christian congregation and also being part of the “religious nones” group.

The resettlement of refugees has been the impetus for the growth of religious diversity in the Bowling Green, Kentucky area. Most of these ethnic groups are still in the earliest stages of establishing and developing their religious communities while still bringing to the table cultural resources and knowledge. While interfaith cooperation is not mainstream in Bowling Green at present, the region would no doubt prove a worthwhile longitudinal case study for considering the challenges and opportunities of religious diversity in the American South. One possible future response to religious diversity in this region might be an increase in an enclave nature of the religious communities.  If a fear of “the Other” or an apathetic unawareness persists (or grows), then religiosity could develop into divisiveness or contentiousness.  However, an increased awareness of and education about religious diversity could become the connector for residents to create together a city where more organized interfaith efforts become mainstream.

[6] See Baker, Joseph O. and Smith, Buster G. “None Too Simple, Examining Issues of Religious Nonbelief and Nonbelonging in the United States.” Journal for the Scientific Study of Religion 48, no. 4 (2009): 719-733, Hout, Michael and Claude S Fischer. “Why More Americans Have No Religious Preference, Politics and Generations.” American Sociological Review 67, no. 2 (2002): 165-190, or Putnam, Robert D. and Campbell, David E. American Grace, How Religion Divides and Unites Us. New York: Simon & Schuster. 2012.