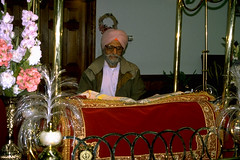 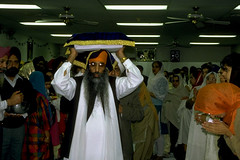 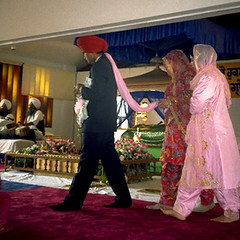 There are more than half a million words in the 1,430 pages of the great book, the Guru Granth Sahib, that lies open on the raised platform in the Fairfax, Virginia gurdwara. Every word will be read this weekend during the akhand path, or unbroken reading, of the sacred scripture. Every two hours, a new reader comes into the hall and sits next to his or her predecessor. At the appropriate moment, without missing a word, without a break, the new reader takes over for the next shift of reading. For forty-eight hours, a group of six readers from the Sikh Foundation of Virginia here in Fairfax will take turns, one after another, until they read every word of the Guru Granth Sahib.

The word granth means book. This book is addressed as Guru, the authoritative spiritual guide, and given the honorific Sahib, most reverend. The Guru Granth Sahib is indeed the living Sikh Guru, for Gobind Singh, the tenth Guru, named the scripture as his successor, thereby formally investing it with central authority over the Sikh community. Thus the Guru Granth Sahib has a pivotal role in the Sikh congregation. Its hymns, called shabads, are sung and recited by Sikhs as the source of both guidance and inspiration for their lives. These words of hymnic praise are understood to be the Divine word, the very form of both the Guru and the one, formless God.

There are some 3,000 hymns in the Guru Granth Sahib. They are not written in the classical languages of scripture, but in the vernacular forms of Punjabi and Hindi, the languages of the common people. Sikhs recite five prayers daily, the most important being the morning prayer, the Japji, which was recited by Guru Nanak each morning. The Guru Granth Sahib does not tell the history of the tradition, nor does it include stories or myths. It is entirely a collection of hymns of God’s praise. They are hymns which many Sikhs know by heart and sing at worship and at work.

In the hall of the gurdwara, the Guru Granth Sahib is set on a raised platform, a kind of lectern, which is covered with a royal canopy. The book itself is covered with bright cloth, often fringed with silver or gold. When the book is open, it is fanned reverently with a white yak-tail fly whisk to keep insects or dust from settling on its pages. As Sikh men, women, and children enter the gurdwara for worship, they first go forward to the altar-like lectern bearing the Guru Granth Sahib. They kneel or bow fully before it, touching their heads to the floor. They make an offering of money. Honoring the position and authority of the scripture is the foremost act of devotion.

Sikhs are careful to say, however, that the Guru Granth Sahib is never the object of worship. Only God is worshipped in the gurdwara, through the Divine Word of the Guru Granth Sahib. But the central place of the scripture in the gurdwara and the attitude of reverence that surrounds its use are symbolic of its position in the life of the Sikh community. The words that are read in an unbroken stream, through two days and nights, are the words of life for the Sikh community.

When the akhand path is over or when the weekly gurdwara service is over, the granthi places the Guru Granth Sahib on his head and carries it from the hall to a special room of the gurdwara where it is kept. It is laid to rest on a soft bed and covered with a satin coverlet, until it is carried back to the public hall the next morning, again on the head of the granthi.