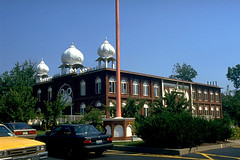 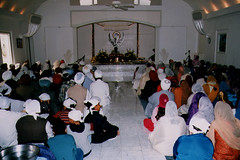 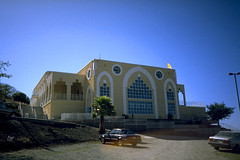 The gurdwara, literally the “gateway of the guru,” is basically a meeting place for Sikhs. It is not considered a sacred space as such, but gains its sanctity from the fact that it houses the sacred scripture called the Guru Granth Sahib. The scripture occupies a place of honor on a raised lectern in the sanctuary. A gurdwara may be as spectacular as the neatly landscaped and newly expanded complex in Palatine, Illinois or as simple as the home of a Sikh family, which may become the gurdwara for a small Sikh community.

The gurdwara is the gathering place of the Sikh community. It is a place of worship to be sure, but is also an educational and service institution that contains a langar hall where large communal meals are prepared and served, and a place where the community may discuss the political and social affairs of the day. In Sikh communities in the United States, the gurdwara has become an essential locus of Sikh identity. For some newly arrived immigrants, it may be the first place they stay, for the tradition of Sikh hospitality, which includes providing shelter and food in the gurdwara, is strong.

No gathering at the gurdwara is complete without taking prashad, a sweet pudding made of mixed wheat, flour, sugar, and butter that is distributed as the divine gift of the Guru. The langar following the singing and prayers from the Guru Granth Sahib is also an important part of the gurdwara program. Each gurdwara is equipped with a large kitchen where men and women prepare the meal, counting it a special service and blessing to be able to do so for the whole community.

America’s first gurdwara was established in 1912 in Stockton, California, in the heart of the farming country where Sikhs first settled. In America today there are dozens of gurdwaras, many of which have re-purposed or renovated existing structures to serve the Sikh community’s needs. In Millis, Massachusetts a former Kingdom Hall of the Jehovah’s Witnesses has become a vibrant Sikh community center. In Bridgewater, New Jersey a single-story house on thirteen acres of land has evolved into a three-building gurdwara complex over the course of three decades. In Hayward, California the community has transformed the sanctuary and educational center of an Episcopal Church into a gurdwara. During the period of transition, it shared the buildings with the Episcopal congregation.

The last three decades have seen the building of a number of spectacular new gurdwaras, too. The gurdwara in Fremont, California is a huge center with over 9,000 registered members. First founded in 1978, the gurdwara is recognizable by its traditional golden domes along former Hillside Avenue, now renamed Gurdwara Road. Further north in El Sobrante a modern-looking gurdwara clings to the side of a hill and large porticos line the second floor deck, allowing visitors to take in vast vistas of the Bay Area. In the heart of Los Angeles, the city’s oldest Sikh community built a very traditional-looking building on North Vermont Avenue. The Sikh gurdwara is fast becoming a visible part of the American religious landscape.