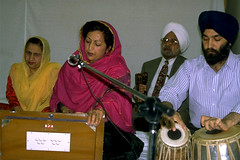 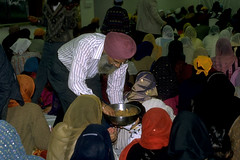 Activity at the Sikh Gurdwara of Greater Chicago in Palatine, Illinois begins early in the morning on Baisakhi day as families arrive with bags of groceries to begin preparation of the langar, or communal meal. As the early morning prayers begin, those in charge of the preparations begin work in the kitchen. Thousands will come to the gurdwara today—from the Chicago area Sikh community and from all over the midwest. Here, as in gurdwaras throughout the U.S., Sikhs make preparations in the kitchen for feeding hundreds, and in some cities thousands, of visitors. Sikhs who live in remote locations and are not able to attend a gurdwara regularly will drive for hours to celebrate Baisakhi with other Sikhs. All visitors are greeted and invited to partake of langar.

Baisakhi is the most important celebration of the Sikh year, held on the first day of the lunar month of Baisakh which falls in the month of April. It is the time of the traditional spring harvest festival in the Punjab. In Amritsar, the Sikh center in the Punjab, Baisakhi is a great pilgrimage day on which Sikhs come from all over India to the Golden Temple. In America, however, Sikhs assemble from near and far at the gurdwara.

In Fairfax, Virginia the parking lot of the new suburban gurdwara fills up in the evening for the celebration of Baisakhi. Families have come in their best clothes—suits and turbans for the men and for women the silk salvar (loose trousers) with the long colorful silk print kamiz (shirt-dresses) and the transparent long scarves, called chunnis, draped over their heads. The shoe racks are full at the rear of the gurdwara. The singing of kirtan is well underway.

What actually takes place on this day, however, is almost identical to the rites observed in the gurdwara at any other time—the singing of hymns from the Guru Granth Sahib, the singing of kirtan, the receiving of prashad, and the sharing of the langar. Today, however, everything takes on a special hue. The crowd is larger. The dress is more festive. Specially trained Sikh musicians, called ragis, may be brought from the Punjab especially to sing kirtan on this holiday. In addition, many other Sikhs lead the shabads, especially youngsters who have practiced for months for this opportunity. In the congregation, they nervously await their turn to sing before proud parents and family.

Some communities, like the Sikhs of Sacramento and New Orleans, also rent a hall for a special Baisakhi cultural program. There is a pageant of folk songs, dances, and skits. Teenage boys perform the Bhangra, a folk dance of the Punjab. The girls and women perform the Gidda. There is a talent show, complete with trophies. This is also an occasion for special speakers to address the congregation, discussing issues ranging from religious themes to the political issues of the day. Because the community turnout is so great, Baisakhi is also a popular time for the election of gurdwara officials.

For Sikhs, the celebration of this holiday recalls another new beginning: the formation of the Khalsa, the special company of the faithful to which all initiated Sikhs belong. The Khalsa was founded by the tenth Sikh guru, Gobind Singh. “It is the birthday of the Khalsa today,” Sikhs will say. And, indeed, Baisakhi in the U.S. is often the time for initiation into the Khalsa. The initiation rite called khande di pahul, or “taking amrit,” frequently takes place on this day, the anniversary of the first initiations.

One of the main events on Baisakhi is the raising of the Nishan Sahib, the Sikh flag. The huge flagpole must be unbolted and lowered as scores of men and women support its weight, and others sing shabads. The flagpole is then washed and the new flag is installed. The wrapping cloth of the flag extends down to the base of the platform, and is fastened with ties of the same orange color as the flag. The new Nishan Sahib is raised as people shout the Sikh slogan “Jo Bole so Nihal,” “Who says this will be exalted!” Each is answered with the affirmation of what it is that needs to be said: “Sat Sri Akal!” “God is Truth!” In all, Baisakhi is a joyful and festive occasion.