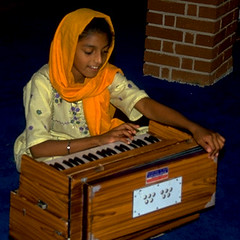 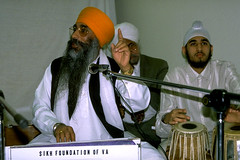 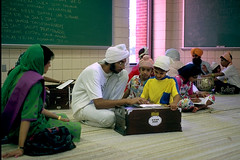 Kirtan means “singing the praises of God.” In Glen Rock, New Jersey, as in gurdwaras throughout the world, there is no more important component of the life of the gathered community than kirtan. Men and women, young and old, learn to sing the Divine word, individually and congregationally. Usually, they sing to the accompaniment of an accordion-style harmonium. Most of the hymns, called shabads, are from the Guru Granth Sahib. They are gurbani, the hymns of the Gurus, or bhagatbani, the hymns of the saints. There are also famous and beloved hymns composed by the Sikh savants Bhai Gurdas and Bhai Nand Lal, always favorites in the singing of kirtan.

The Guru Granth Sahib is poetry, and its poetry is sung. The full spirit and power of the word is in the singing of it. All of the shabads contained in the Guru Granth Sahib are set to particular traditional musical scales called ragas, each meant to be played at a particular time of day or to evoke a particular mood. When Guru Arjan arranged the Adi Granth, he ordered its thirty-one sections according to musical raga. The ragas are noted before each shabad.

The poetry of the Guru Granth Sahib is, for the most part, in Punjabi. For this reason, all Sikhs, even in the United States, make an effort to teach their children Punjabi so that they may sing the hymns, feel their resonance and beauty, and most important, understand their meaning. Transcending the music, Sikhs aspire to hear the anahad shabad, or the “unstruck melody,” which is beyond the range of ear and mind, but is produced by God and heard by the soul.

During the gurdwara program, the appointed reader of the Guru Granth Sahib, called the granthi, may sing the hymns, as will the ragis, or trained Sikh musicians. In addition, many members of the congregation (sangat), including children, will also lead the shabad. The visitor to the gurdwara will see Sikhs of all ages, women and men, leading the recitation, hour after hour.

Hearing, remembering, and singing the praises of God are central to Sikh life. Through the hymns, Sikhs carry the name of God within, remembering the Divine Name throughout the week, at work and at home. But congregational singing provides a community of praise that both sustains and inspires.