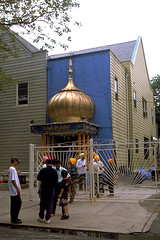 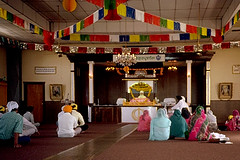 During the years between 1917 and 1946, direct immigration from India had been virtually cut off, although a few Sikhs continued to enter the United States through either Canada or Mexico. In the late 1930s, one of the foremost advocates of changing the restrictive immigration and naturalization laws was Jagjit Singh, who had come to the United States in 1926 and had become a successful importer in New York. He became president of the India League of America and lobbied in Congress to support freedom in India and citizenship for Indians in the U.S.

After World War II, Congress passed new immigration legislation that allowed one hundred Indians per year to enter the U.S. Among the first to come were Sikhs, motivated to join family members already settled in California. The 1946 legislation also cleared the way for citizenship. Sixty-eight Sikh “old-timers” from the Imperial Valley, some now in their eighties, submitted applications for citizenship. In the same year, America’s second gurdwara got its start in the Imperial Valley in El Centro. One of the hardest workers for citizenship for Indian Americans was Dalip Singh Saund. He became the first Sikh and the first Indian-American member of the U.S. Congress, where he served from 1956 to 1962.

The situation changed even more dramatically after the 1965 Immigration Act. A large number of Indian immigrants, including many highly skilled professionals, began to change the face of the American Sikh community. In the late 1960s and 1970s new gurdwaras were opened in California—in Yuba City, Los Angeles, San Francisco. The Richmond Hill Gurdwara got its start in New York City. During the 1980s, gurdwaras were opened all over the greater New York area—in Long Island in 1985, in Bridgewater, New Jersey in 1986, and in Glen Rock, New Jersey in 1988, for example. This period also saw the extension of the Sikh community beyond California and New York. Gurdwaras opened in most major cities including Chicago, Detroit, Washington D.C., Houston, Oklahoma City, Denver, and Milwaukee.

The new immigration after 1965 increased the size of the American Sikh community swiftly and dramatically. It also initiated what one scholar has called the “reconstitution” of the Sikh community along more traditional and orthodox lines. The new immigrants encountered what often seemed to them strange and somewhat diluted practices and forms of Sikh expression among the old and, by now, assimilated Sikh community. Negotiating a Sikh identity involved, for the most part, a return to a more traditional form of Sikhism as the newcomers became actively involved in the old gurdwaras. Before long the chairs disappeared, shoes were once again removed, and a more Punjabi form of the tradition emerged.

The pace of changes continued. Before long, the immigrants of the 1960s and 1970s were the old-timers. A new wave of Punjabis came after 1984, the year the conflict in the Punjab came to a head with the Indian Army’s siege of the Darbar Sahib in Amritsar. These newcomers brought a new and urgent sense of the Sikh agenda. Once again, a re-negotiation of Sikh identity in America was initiated.