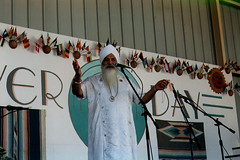 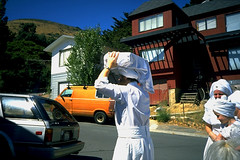 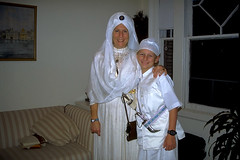 In 1968 Harbhajan Singh, popularly known as Yogi Bhajan, came to the United States, inspired especially by the fourth guru, Ram Das, to bring the message of the Guru Granth Sahib to the West. In the late 1960s and 1970s, he attracted many young American followers with the universalism of the Sikh message, the practice of yoga and meditation, and the emphasis on a natural and healthy lifestyle. In 1969, the movement called 3HO, an acronym for the Happy, Healthy, and Holy Organization, was formed. It later became known as Sikh Dharma and its administrative body, the Khalsa Council, was formed in 1974.

There are some 400 3HO yoga centers, community organizations and ashrams (residential spiritual communities) throughout the United States today. In addition to their work in the community, ashram residents in places like Anchorage, Alaska and Melrose, Florida have ordinary jobs as teachers, lawyers, security officers, and accountants. They are readily identified by their distinctive dress in white cotton garments and white turbans. Over the course of more than thirty-five years, Sikh Dharma has developed its own forms of Sikh practice and ministry. Its first generation of followers now have children and have developed the forms of community life appropriate for families. Their relations with the more recent immigrant Sikh communities have been problematic at times, but are, on the whole, cordial and respectful. In some places, like the Guru Nanak Dwara in Phoenix, Punjabi and Euro-American Sikhs are part of the same community.