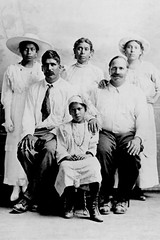 In the face of discriminatory measures, the Sikhs who managed to stay in the United States developed a small but significant subculture in California. While historically Sikhs had married within the Sikh community, those who stayed on the West Coast often remained single or married non-Sikh women, usually Mexicans. One scholar estimates that 10 percent of Sikhs who came to the U.S. intermarried. Public pressure enforced a voluntary “low profile” for Sikhs, which included giving up the distinctive exterior emblems of the uncut hair and beard, and the turban. The haircutting and shaving was sometimes part of the wedding day ceremonies. In practical terms, these men became part of Catholic Mexican, Spanish-speaking society. Their children, with names such as Maria Jesusita Singh and Miguel Garewal were raised Catholic with only a nominal knowledge of Punjabi culture or Sikh tradition. Nonetheless, they developed a distinctive sense of what they called a “Sikh-Mexican” identity.

The gurdwara which opened in Stockton, in 1912, became a center for all Sikhs, including these Sikh-Mexican families. Families would come from as far away as the Imperial Valley to participate in the big celebrations of Guru Nanak’s birthday, Baisakhi. The Sikh gurus were referred to as “saints” by the women of these Sikh-Catholic families. The first gurdwara was replaced, in 1929, with a brick building on the same site, called the “Sikh Temple.” During these years, differences arose within the community. Should the congregation use chairs or sit on the floor? Should they remove shoes before entering or not? Should men and women sit separately or together? By the late 1940s, an assimilationist pattern had prevailed. Clean-shaven Sikh men sat on folding chairs, side by side with their wives, shoes on their feet.