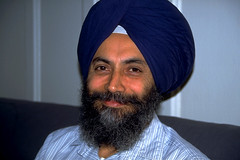 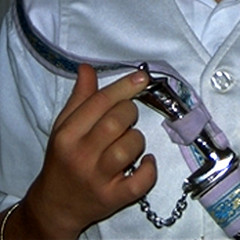 Wearing uncut hair (kes) covered with a turban and carrying the symbolic knife (kirpan) are two of the five emblems of Sikh initiation into the khalsa. So it has been since the beginning of the eighteenth century. In twentieth-century America, Sikhs have had to defend the right to wear these sacred symbols of faith and some of these cases have begun to set legal precedents.

In 1994, the Livingston Union School District in California prohibited three Sikh children of the Cheema family, who had taken amrit to join the khalsa, from wearing the kirpan to school because the school’s policy barred the possession of knives on school property. Knives, even symbolic knives, might be a danger to other children and create an atmosphere of fear. They suggested, perhaps, a kirpan medallion as a substitute. The Cheema family asked the district court for an injunction which would prohibit the school district from applying the knife-rule to the kirpan. The district court denied this motion and the Cheema children withdrew from school in January of 1994.

When the U.S. Court of Appeals heard the case in August of 1994, it reversed the lower court’s decision. A Sikh scholar testified that “it is my belief that the obligation to wear a kirpan cannot be fulfilled by a medallion or any similar replica. In fact, I believe that wearing such a substitute would actually be inconsistent with the injunctions of our faith against idolatry.” He explained to the court that the kirpan as a knife “is not, however, a weapon and would never be so regarded by a Khalsa Sikh. Rather, it is an important religious symbol… Other than in connection with religious festivals or celebrations, it would not be removed by the wearer for any purpose, and certainly not for use as an offensive weapon to harm others.”

The Court ruled that the Livingston elementary school must make “all reasonable efforts” to accommodate the religious beliefs and practices of the three Sikh youngsters. “We conclude that the Cheema children will suffer not just hardship, but possibly irreparable injury if they are not allowed to attend school during the pendency of this case.” Citing the Religious Freedom Restoration Act of 1993, the court stated a person’s free exercise of religious belief cannot be infringed by the government without demonstrating a “compelling governmental interest.” Other school districts permit the carrying of kirpans, which Sikhs have voluntarily sewn into their sheaths, and such was the agreement reached in Livingston [No. 94-16097].

Janet Cooper’s case in Oregon was different. She was a public school teacher who became a Sikh and adopted the white turban and the white garb that members of the Sikh Dharma wear. She was dismissed from her position, in compliance with the Oregon statute [ORS 342.650] providing “No teacher in any public school shall wear any religious dress while engaged in the performance of duties as a teacher.” The case was reviewed by the Supreme Court of Oregon which reviewed and upheld the Oregon law, opting for the “child’s right to the free exercise and enjoyment of its religious opinions or heritage, untroubled by being out of step with those of the teacher” [723 P.2d 298 (0r.1986)].

Uncut hair was the issue for Manjit Singh Bhatia, a California machinist. He brought action against the Chevron company, which had removed him from his job because of its policy requiring employees who might be exposed to toxic gasses to shave facial hair that might prevent them from achieving an airtight seal when wearing a respirator. Bhatia filed suit against Chevron for religious discrimination. He had been working at Chevron as a machinist for several years before the new safety requirements were set in place. He argued that he could not shave his facial hair because of the vow of devout Sikhs to maintain uncut hair. Chevron offered him several other positions, with lower pay than that of a machinist and promised to return him to a machinist’s position if a respirator were developed that he could safely use. The Ninth Circuit U.S. Court of Appeals held that Chevron had “made good-faith efforts” to accommodate the plaintiff’s religious beliefs and to go further would have caused “undue hardship” to the company [734.F.2d.1382 (1984)].

Similarly in 1981, the U.S. District Court in Atlanta, Georgia considered a case brought by a Sikh who had applied for a position at Sambo’s Restaurant and had been denied a job because “the employer required clean-shaven restaurant personnel in accordance with the industry’s recognition that clean-shaven personnel are necessary in family restaurants.” Mohan Singh Tucker had been employed at a Pizza Hut and had applied for a managerial position advertised by Sambo’s. In an interview he was told he would not meet the grooming standards of Sambo’s. Sambo’s public image policy, applied uniformly in more than 1,000 restaurants since 1957, is based on Sambo’s judgment that its clientele “prefer restaurants whose managers and employees are clean-shaven.” The court ruled in favor of Sambo’s.

There are other important cases in progress for the Sikhs. The Metropolitan Transit Authority (MTA) announced in May 2012 that it would change the uniform policy to accommodate Sikh and Muslim employees. In 2005, Kevin Harrington, a Sikh subway operator, brought a case against the MTA after being told he must remove his turban or affix a logo to it. Failure to comply would mean that Harrington, whose quick action on the morning of September 11, 2001 saved the lives of passengers on his train, would be removed from his post and reassigned to working in a storage yard. Harrington’s case and several others brought against the MTA by the Sikh Coalition and the Center for Constitutional Rights led to the change in MTA policy. Today, no logo is required, but religious headwear must be blue to match MTA uniforms. In 2010, two Sikhs were granted exceptions by the U.S. Army to serve in active duty while wearing a turban. These exceptions, the first in the nearly twenty-five year history of the prohibition on “‘conspicuous’ items of faith,” are small concessions but they will no doubt have long-term implications as Sikhs continue to lobby on issues important to their religious identity.