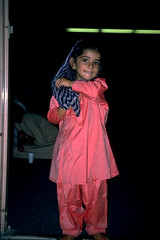 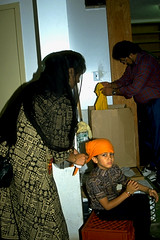 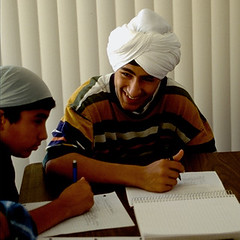 In 1990, the Sikh Study Circle of Dallas-Fort Worth published a book of questions and answers called Sikh Faith for the Youth. It begins, “During the Sikh youth camps held in North America for the past 15 years, we have been bombarded with a multitude of questions about our religion. The Sikh Faith for Youth, in the form of questions and answers, is the need of the hour.” The book gathers together hundreds of common questions: If God made this world, why is there evil? If our religion is so great, then why do people ask me, “What is your religion?” and say, “I have never heard of that religion before.”? If a Sikh took amrit and later lied, is he a true member of the Khalsa or not? Why do men and women sit separately in the gurdwara?

Asking probing questions about one’s own religion is in the best perennial tradition of America’s religious life—whether one is Christian, Jewish, or Sikh. A book like the one produced in Dallas is but one of a multitude of approaches to the challenge of appropriating Sikh faith in the next generation. One Sikh youth writes about this stage of questioning, “As youth, we inevitably ask questions like, ‘Why should I bow to a book?’ In this stage of questioning our cherished institutions must play a major role. Gurdwaras, Sikh youth camps and seminars are vital in this phase. Being in the presence of the sangat, in the gurdwara or at a camp with a hundred other young people, can often serve to bring logic to these questions.”

A common concern of every immigrant family is passing on their values and beliefs to their children. Preserving one’s own religious identity while becoming part of the broader fabric of American society is a challenge for all immigrants from India. In the case of the Sikhs, however, there is the added pressure of the visible identity given by their distinctive appearance. Sikhs do not cut their hair or shave. Therefore, especially for boys, peer pressure, compounded sometimes by peer ridicule, can be devastating. As one Stockton parent reflected, “Kids pulled his hair and called him a girl. They shoved him around in the lavatories. He cried every day and didn’t want to go to school. Finally, we cut his hair.” More than a few young Sikhs have been harassed and teased by classmates because of their uncut hair, and more than a few have decided to cut their hair. Being a Sikh in America requires the nurturing of a strong inner sense of identity.

Fortunately, Sikh families tend to maintain strong family and community ties. Belonging to the greater Sikh community and participating in the life of the gurdwara can be of critical importance for claiming Sikh identity in the next generation. The gurdwara, where Sikhs congregate at least once a week, becomes an important meeting place for Sikh youth as well as for their families. Here, however, Sikhs often feel they are going against the prevailing current in America. One New Jersey parent put it this way: “Our life is centered around the family. Doing things with the family, even the extended family. But here, kids’ lives are not family-centered. Independence, dating, doing what they other kids are doing—this is American youth culture.”

Many gurdwaras have developed extensive youth programs. In Chicago and Dallas, for example, the Sikh community is spread out and most Sikh young people are the only Sikh students in their school or neighborhood. The gurdwara is the only place they have the company of a community of Sikh youth. Sikh parents in the gurdwara encourage their children to learn the hymns by providing a “Sunday school” and contests for the best recitations. In San Jose, as in most areas of the U.S., there are regional shabad kirtan competitions and even national competitions, with several days of competition among scores of recitation teams. The Sikh Center of the San Francisco Bay Area has published guidelines for the successful implementation of Sikh Sunday school, recommending a varied curriculum including Sikh history, Sikh ethics, Punjabi language instruction, and kirtan recitation.

The Internet also provides a meeting place for young Sikhs to connect with one another and to discuss the challenges they encounter growing up Sikh. In response to a survey that found 75 percent of Sikh boys in Queens had been harassed or bullied at school, the Sikh Coalition created Khalsa Kids, a website that seeks to build community among Sikh youth and “inspire [them] to be proud of who [they] are.” Khalsa Kids features games, message boards, and interviews with race car drivers, artists, and filmmakers who happen to be Sikh. On an international scale, SikhNet’s Youth Online Film Festival encourages young people to engage with their faith through media. First launched in 2006, the Film Festival drew entries from young people (ages 11-25) from ten countries. Due to popular demand, a “senior” category was added to the festival the following year to accommodate entries from filmmakers over the age of 25.

Sikh summer camps are also critically important. One teenager in Chicago, says that going to the summer camp helped him dispel feelings of alienation. “Seeing so many other teens like myself made me feel part of a big family.” Sikh summer camps have sprung up all over the country in response to the needs of children and youth. The Sikh Society of Michigan, based in the Detroit suburb of Troy, sponsors a Sikh Youth Camp every summer at the Proud Lake Recreation Area. Since the late 1970s, the Sikh Youth Federation of North America, Inc.’s Camp Chardi Kala in Bloomingburg, New York has been strengthening Sikh youth “to serve as a model for the rest of the community” through their programming, placing “great value on the Khalsa way of life.” One of the oldest camps is the Sikh Youth Camp in Southern California sponsored by the International Institute of Gurmat Studies.