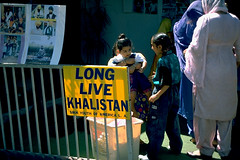 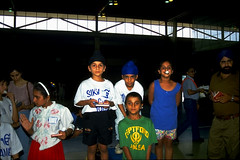 At the gurdwara in Fairfax, Virginia, there is a plaque outside the sanctuary bearing the inscription, “Dedicated in memory of the martyrs who died in the siege of the Golden Temple, Amritsar.” In Fremont, California one wall of the large langar hall is set with photographs of the martyrs of the conflict in Amritsar. Among them is Sant Jarnail Singh Bhindranwale, a radical leader who led a campaign for greater autonomy of Sikhs in India as articulated in the Anandpur Sahib Resolution.

The events of June, 1984 had a powerful impact on the Sikh community in America. In early June, the Indian Army attacked the most sacred center of the Sikh tradition, the Darbar Sahib, or Golden Temple, in Amritsar, to attempt to dislodge the Sikh separatist forces which had made it their sanctuary. The sacred complex was filled with people, including many pilgrims who had come to observe the martyrdom of Guru Arjan Dev, the fifth Sikh guru. The violence of the attack on the Golden Temple and the Akal Takht, in which thousands of Sikhs were killed, was felt throughout the Sikh world.

On July 28, 1984, the World Sikh Organization was established at a convention in Madison Square Garden in New York “to support the struggle of Sikhs in the Punjab for self-determination and the preservation of their distinct religious and ethnic identity.” The new organization soon began publishing a weekly newspaper, World Sikh News. Sikhs throughout America were alarmed at the media portrayal of the Punjabi Sikhs as violent terrorists. The events of 1984 made it clear how little the American public knew about their new Sikh neighbors.

The longing for Khalistan, a free nation ruled by Sikhs is not new. With the institution of the khalsa at the turn of the eighteenth century and the weakening of the Mughal empire, Sikhs dreamed of establishing their own kingdom. In 1801, Ranjit Singh was crowned king of a Sikh kingdom in the Punjab, one of the most formidable independent kingdoms to be conquered by the British and incorporated into British India. Sikhs then became active participants in the campaign for Indian independence from British rule. With the partition of India into India and Pakistan, Sikhs yearned for a separate state along the lines of that achieved by Muslims in Pakistan. Instead, the very heartland of the Sikhs, the Punjab in northwest India, was the land through which the dividing line of independent India and Pakistan was drawn. Many Sikhs were displaced from what became Pakistan and came to the eastern part of the Punjab and to Delhi as virtual refugees. Over the years, the desire for “Khalistan,” a land ruled by the khalsa, has repeatedly emerged.

While Sikhs were not of one mind on the demand for Khalistan, the attack on the Golden Temple in 1984 touched off a renewed sense of Sikh grievance at the hands of the Indian government. Later that year, two of Prime Minister Indira Gandhi’s Sikh bodyguards assassinated her in the garden of her residence in New Delhi. This act of reprisal for the military operation in Amritsar sparked counter-reprisals in Delhi as anti-Sikh riots claimed the lives of several thousand Sikhs in the wake of the assassination.

The repercussions of this tragic struggle in India have resounded in America as well. Since 1984, there are new tensions in American gurdwaras. By the 1980s, the first generation of new Sikh immigrants who had settled in the U.S. in the sixties and seventies had just begun to put down roots and build gurdwaras. Their children were in grade school and high school. The challenges of what it means to be Sikh in America were very much on the agenda of the new American Sikh community. Sikh gurdwaras were concerned with developing Sikh educational materials appropriate for the American context and responding to the concerns of teenagers experiencing the pains of being a visible minority in suburban high schools.

When a new and sometimes angry group of immigrants arrived from the turmoil of the Punjab after 1984, they found many American gurdwaras concerned with quite a different set issues than those that were center-stage in the Punjab. Some newcomers accused American Sikhs of not being sufficiently “Sikh,” not making Khalistan the top priority, while some American Sikhs saw some of the newcomers as extremists who wanted to take over the gurdwaras for political purposes. As one Virginia parent put it, “The latest wave of immigrants feels that the focus should be on support of Sikhs in India. It’s not fair or appropriate for our young people. The situation in India is complex and we, here in America, have a responsibility to our children to be clear and proud about what it means to be a Sikh here.”

Tensions within the Sikh community have inevitably arisen over this issue. Virtually all Sikhs were horrified by the military move on the Golden Temple, even though the majority of the American Sikhs at that point had not thought seriously about Khalistan. This event, however, changed the face of American gurdwaras. Gurdwara programs, discussions, and lectures rarely fail to face the issue of Khalistan today. And yet, sympathetic as many American Sikhs are, their immediate concern is how to be a Sikh community, now, in America—in Dallas, in Richmond, in Denver, and in Durham. India or America, Khalistan or California: Where is the focus to be, where the balance of attention? This is a very real issue and the opinions vary considerably.