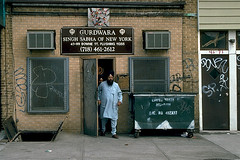 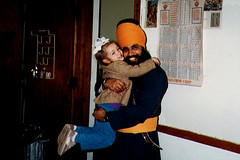 The nineteenth century saw the rise of small Sikh reform movements. There were the Nirankaris, who rejected the political vision of the Khalsa and emphasized once again the formlessness of the Divine and the anti-ritualism of the early Sikh tradition. The Namdharis advocated simplicity in Sikh ceremony and focused on the recitation of the holy Name, the practice of “Nam.” Toward the end of the century the Singh Sabha Movement promoted both Sikh and western education, establishing the Khalsa College in Amritsar in 1892 and a college for women in Ferozepur in 1894. The Singh Sabha also emphasized the distinctiveness and separateness of Sikh identity. They began to reclaim gurdwaras from the hands of Hindu administrators called mahants and to remove the Hindu images which had been installed in some of the temples.

The movement toward a new, more clearly defined Sikh religious identity culminated in 1925 in the Sikh Gurdwaras Act which placed gurdwaras in the hands of specified Sikh authorities and defined a Sikh as “one who believes in the ten gurus and the Granth Sahib.” In these years, the Sikhs began to standardize a code of individual and communal Sikh conduct and behavior called the Rahit Maryada, which was approved in the 1930s.

In 1947, the partition of India into India and Pakistan cut right through the Punjab, which most Sikhs called home. Some two and a half million Sikhs moved into India from the part of the Punjab that became Pakistan. Prior to the partition, some Sikhs had demanded a separate Sikh state in the Punjab. The voice for Khalistan, a land ruled by the Khalsa, became especially insistent during the 1980s. Sikh tension with the central government escalated in 1984 over the Indian army’s attack of the Golden Temple and thirty-seven additional Sikh shrines across the Punjab on the day commemorating the martyrdom of the fifth guru, Guru Arjan. The Indian government reported that it wanted to flush out separatists who were fortified in one of the buildings in the Golden Temple complex.

Today Sikhism is truly a world religion. There are Sikh communities all over the world—in East Africa and South Africa, Singapore and Hong Kong, London and Los Angeles. Sikhs are, on the whole, eager participants in the life of their new communities and homelands. The Sikh community is regularly involved in interfaith councils and activities. At the same time, Sikhs have a very distinct fellowship and a strong sense of identity that resists assimilation into their host communities. Sikhs are firmly rooted in their faith, but respect other faiths and do not proselytize. Sikhs combine the strength of universal values with pride in a distinctive heritage.

Documentary examining why followers of the Sikh religion were marked out as a ‘martial race’ under the British Empire, and how thousands of Sikh soldiers valiantly laid down their lives for Britain’s freedom across two world wars.

With contributions from eminent historians, military experts and war veterans, the film features the last-ever interview with legendary WW2 Squadron Leader Mahinder Singh Pujji, and the first television broadcast of a rare audio recording of a WW1 Sikh prisoner of war, handed to Britain in 2010 after 94 years in German hands. (Duration: 30 minutes)