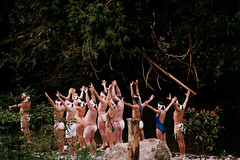 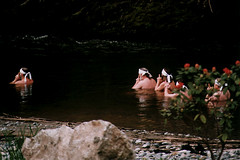 The sweeping away of impurities or misfortune serves to restore the clear beauty and harmony of life. It is a ritual gesture as natural as it is universal. The Shintō tradition understands and ritualizes the regular human need for such a sweeping. As worshippers approach the kami, they wash hands and face in the cold water at the entry to the shrine. The distinctive gateway called the torii marks the worshipper’s entry into the sacred space where the holy power of the kami is present. People approach the stone water holder to dip water to wash their hands and mouths before approaching the shrine. The priest purifies the way as the door to the shrine is opened and purifies the altar where the offerings of fresh fruit will be made.

Other rites of purification take place in many contexts. A car will be purified by harai before it is driven, or an airplane purified before it takes off in flight for the first time. The Shintō priest at Tsubaki Grand Shrine of America is sometimes called for purification ceremonies related to groundbreaking, building, and business. For example, Japanese companies building in America will call the priest for groundbreaking ceremonies. The Reverends Iwasaki and Ochiai who served the shrine in its early years in Stockton did the purification ceremony of the Bishamon Corporation in Ontario, California and the Takashimaya Building on Fifth Avenue in New York. They offered purification at the Cypress Golf Club near Los Angeles and opening purifications for Tony Roma’s chain of restaurants in cities throughout California. Here purification is performed and tamagushi, evergreen branches, are offered to the kami.

Another distinctive rite of purification is called misogi. This is a rite of water purification. Misogi can be performed in a rushing river, but traditionally it is purification by waterfall, literally placing oneself under the pounding cascade of a cold waterfall. The Reverend Yamamoto and many others near the Tsubaki Grand Shrine in Japan make this a daily practice, even in the chill of the winter. Women in white kimonos and men in white loin cloths and headbands wait patiently in the cold for their turn to enter the plummeting waters of the waterfall. This rigorous ascetic discipline is to purify oneself. As Rev. Yukitaka Yamamoto put it, “Misogi-shuho is the shortest and quickest way to approach and assimilate the kami nature.”

In the United States misogi is also being practiced. A group has practiced misogi at Gypsy Falls near Lake Tahoe in California. Near Seattle, at the Kannagara Jinja, now the Tsubaki Grand Shrine of America, an American-born Shintō priest leads a group into the chilling rush of the Pilchuck River for river misogi. In 1993, a Berkeley Unitarian minister and one of the priests of the Tsubaki Shrine in Stockton jointly led a misogi for eighteen people, mostly Unitarian Universalists who were heading for their national assembly in Charlotte. It took place at a waterfall near Highland, North Carolina. The Reverend Richard Boeke wrote in the Tsubaki News, “The mountain staff and I went to the Misogi waterfall for preparation on the morning of June 22. We put a safety rope in place and roughened slippery stones around the waterfall. Reverend Iwasaki and participants arrived at the waterfall around 4 p.m. They were surprised at its magnificence. We changed clothes and started the exercises. After the exercises, we did Misogi [sic] under the waterfall. That night, participants talked about the experience. Everyone said they had never felt like Misogi [sic] had made them feel. At the end, we made a circle and promised to do it again.”

Harai and misogi are two forms of purification rites. The simplicity of being dusted with a paper wand and the austerity of submitting to the torrent of a waterfall create very different experiences. Both are important. As one Shintō priest puts it, “One must always do misogi and harai. In Shintō these rites are to renew, to refresh, to be reborn.”