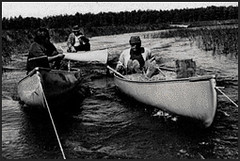 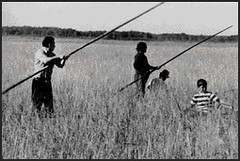 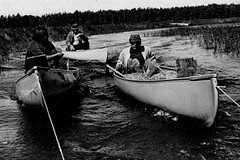 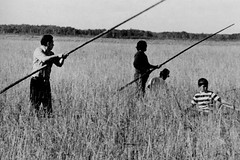 For peoples native to the region of the Western Great Lakes, the fruit of a certain grain that grows in the shallows of lakes and slow rivers is called manoomin, the “good berry” or “fruit” that was granted to the people of the land by the spiritual sources of life. Known in English as wild rice, manoomin was and still is a staple food, but it is also a powerful emblem of the particular peoples of the region and of their relationship with the natural and spiritual dimensions of life. The Menominee people of Wisconsin have such a special relationship to this plant that they take it as their name: they are literally “the people of the wild rice.”

Today, as in generations past, entire communities venture off to their rice camps in late August and September, where they harvest green rice, dry it, parch it, “dance” or “jig” it to loosen the grain from the hull, and winnow it. The harvest is carefully controlled by an ethical relationship with the plant, supported by its myth of origin and a long natural history of cultural value.

From the days when Native people supplied Europeans at the trading posts of the fur trade, wild rice has provided Native communities in this region with an important source of commercial income. However, since the 1970s, when a domesticated strain of wild rice was developed, agro-business economic development projects of cultivating “paddy rice” have failed in Native communities, where the relationship with the plant is not an economic relationship with a commercial crop, but rather a spiritual relationship with an important source of community identity and well being.

Manoomin might even be called a sacred food among the Ojibwe people and their neighbors. No ceremony or public gathering will be without a feast, and no feast will do without a number of manoomin dishes, be it a picnic or powwow, a graduation party or funeral wake. Often a “spirit dish” of each food will be prepared, and upon the blessing of the food, will be quietly placed in a field for the spirits.

The traditional way of harvesting manoomin in canoes is also central to the lives of these Western Great Lakes communities. The weeks of late summer and early fall are perhaps the most special time of the year because of their association with the rice harvest. As time draws near, reservation communities buzz with talk of the quality of the year’s crop, of where and when people will journey to the rice fields for harvest. Many Native people who live far away in urban areas will return to the lakes and streams of the reservations especially for the rice harvest. The village of Ball Club on Minnesota’s Leech Lake Reservation honors the plant each year at this time, during its traditional Mi-gwech Mahnohmen Days, its “Thank you Manoomin” Powwow.