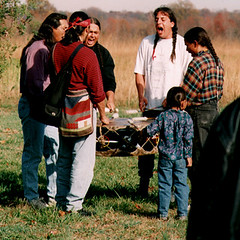 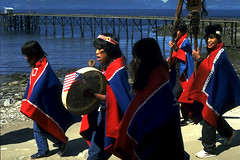 For America’s Native peoples, the drum is much more than a percussion instrument. For many different tribes and traditions, the drum is a powerful and resonant symbol of Indian identity and spirituality. The Anishinaabe Ojibwe people of the Great Lakes region, for example, have particularly rich traditions surrounding the drum. They speak of it as the “heartbeat” of the people, not itself an object of worship but a spiritual messenger that voices the collective prayers of the people to the world of the spirits.

Among the Ojibwe, there are different kinds of drums, some with highly specific functions for particular ceremonies, like the water drums of the midewiwin ceremonial society, others pertaining to more social occasions like powwows. Some drums known as hand drums may be carried by individual drum keepers; other drums are associated with special drum societies, or “singing groups.” In each case, drums are accorded a high level of ceremonial respect.

In the Ojibwe language, which grammatically distinguishes animate from inanimate objects, drums are considered to be animate. Drums are fashioned according to long-standing traditions by respected drum makers, who sometimes make drums in response to visionary experiences. These drums are passed down through the generations with care. Many drums in use today have been bought at music stores, but can nonetheless join the more traditionally fashioned drums in the ceremonial welcomings, or initiations, into the life of the community.

Drums are treated according to elaborate codes of respect. Traditions vary according to each particular drum, but drum keepers are generally recognized as responsible for a drum’s well-being. Drums may be “clothed” with blankets, regularly purified with smoldering sage and cedar, thanked with offerings of tobacco, and feasted at gatherings of the community. Some drums may be sounded only rarely, but are brought out to receive visitors and offerings.