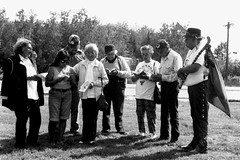 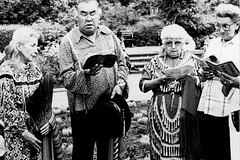 Beginning in the 1830s, Protestant and Catholic missionaries translated their favorite hymns into the Ojibwe language and promoted their use as part of a campaign to root out the “Indianness” of Ojibwe people. Instead of indigenous music, deemed “savage” because it involved drumming and dancing, these hymns in the Ojibwe language were introduced to inculcate the virtues of “civilized” Christian life as described in hymn texts like the following:

Awake, my soul, and with the sun
The daily stage of duty run,
Shake off dull sloth, and joyful rise,
To pay thy morning sacrifice.

Something about these songs caught the Ojibwe spiritual imagination. Missionaries wrote often of how solemnly Native people sang them and noticed that discrete groups of Ojibwe singers traveled among the reservations to bring hymn performances to important community gatherings, especially funeral wakes.

This tradition of singing hymns in the Ojibwe language at funeral wakes thrives today. Since so few Minnesota Ojibwes speak the original language fluently, hearing the living language sung at such charged moments in the life of the community makes these hymns emblematic of who the Ojibwe are as a people. Like many Native communities, Ojibwe people have transformed the music of missionization and colonialism to make it wholly their own.