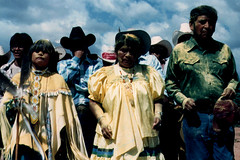 A carefully prepared buckskin dress, worn by an Apache girl during her ceremonial initiation into womanhood, plays a significant role in her ritual transformation and in the larger life of the community. Among the Apache of what is now Arizona, New Mexico, and Oklahoma, the central ceremonial gatherings of the entire community are the feasts which celebrate a girl’s transformation into a woman. The girl, her family, and ritual sponsors spend a year preparing for the feasts through meditation, prayer, and learning the ways of Apache culture. The entire community joins them in the four-day ceremony that takes place at the culmination of this year-long process. During these four days, the young girl is ritually “sung” into the earth deity called Changing Woman. In the process, Changing Woman is renewed with the girl’s youth while the girl takes on Changing Woman’s maturity, and emerges as a woman. The entire ceremony recreates what Changing Woman ordained in the myth of creation told by the tribal community.

The dress worn by the girl suggests outwardly those attributes of Changing Woman that the girl will take on as she becomes ceremonially transformed. It is an elaborate white buckskin dress, never before worn. The dress is ritually made and it represents symbolically the various elements of the Changing Woman myth. The deer who gives its skin for the dress is respectfully and prayerfully killed, not by gunshot or knife wound, but by being suffocated with a handful of sacred cattail pollen. The fringes on the dress refer to the rays of the sun, and they swing gracefully in the girl’s night-long shuffling dance before a ceremonial fire, the dance in which she becomes Changing Woman. Turquoise and colored ribbons stream from the dress and evoke the power of the four sacred directions. An abalone pendant attached to the girl’s forehead symbolizes her ritual transformation into Changing Woman, who is also known as Painted Woman or White Shell Woman. Ceremonial songs accompany each significant moment in the preparation of the dress and bring forth Changing Woman’s power by giving voice to her myth.

During the four days of the ceremony, Changing Woman’s power makes the dress and other paraphernalia potent enough to bring healing and longevity to the gathered community. The living presence of Changing Woman gives the young Apache woman who goes through this ceremony the spiritual strength and sense of cultural identity necessary to face with uncommon fortitude the challenges of life in two worlds.

The Chorus of “I Built a Wickiup”

“I Built a Wickiup” are the words of Changing Woman, the mythological Apache deity who created the Apache people, traditionally sung by the Apache medicine person as a young women being initiated in the Sunrise Ceremony is painted. A wickiup is a traditional Apache dwelling.

translation:
In the beginning there was no wickiup.  So I built a wickiup.
(repeat)