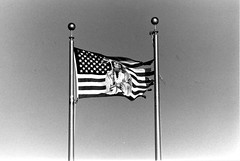 In God is Red, Vine Deloria, Jr. famously argued that Native religious traditions are oriented fundamentally in space, in contrast to the time-oriented traditions of Christianity and Judaism. Such a worldview is ensconced in the idioms, if not structures, of many spoken Native languages. Yet, despite persistent romanticized images which paint a picture of “noble savages” who are able to instinctively and silently glide through the forest, living in balance with particular landscapes has been the fruit of hard work among Native peoples as well as a product of worldview. In other words, Native American religious worldviews promote moral standing of non-human life—right relations with plants, animals, and the spirits that stand behind and through non-human life—, an aspiration that requires sophisticated ethical disciplines and ritual labor.

Still, even though certain places on landscapes have been sacred in the customary sense of being wholly distinct from the profane and its activity, many places sacred to Native peoples have been sources of material as well as spiritual sustenance. Likewise, many sacred practices of living on landscapes are incorporated into sustaining physical life. In the reckoning of Native peoples, pursuits like harvesting wild rice in the Western Great Lakes or spearing fish in the Pacific Northwest can be at once religious and economic in ways that have been difficult for Western courts to acknowledge. Places and practices have often had both sacred and instrumental value.

That sacred Native lifeways have only partly corresponded to the modern Western language of “religion” has not stopped Native communities from seeking protection of their freedom to exercise and benefit from those lifeways. Although the free exercise of religion is ostensibly protected by the First Amendment of the U.S. Constitution, certain cultural freedoms are seen by many native communities in the same manner as religious freedoms. In the days of treaty making (formally closed by Congress in 1871) and in subsequent years of negotiated agreements, Native communities often stipulated protections of certain places and practices. Lakota leaders did this in the Fort Laramie Treaty when they specifically exempted the Paha Sapa, subsequently called the Black Hills, from land cessions. In 1837, Ojibwe leaders expressly retained in the treaty process the “usufruct” rights to hunt, fish, and gather on lands otherwise ceded to the United States.

But these and other treaty agreements have been honored neither by American citizens nor the United States government. Native communities have struggled to secure their rights and interests within the legal and political system of the United States despite working in English—and in legal language, in particular—that does not easily give voice to Native regard for sacred places, practices, and lifeways.

In light of the ruling in Lyng v. Northwest Cemetery Protective Association (1988), there have been few subsequent attempts to seek comparable protection of sacred lands, whether for the purposes of access, control, or preservation of the integrity of sacred places. Prior to the 1988 Supreme Court decision, three noteworthy cases were heard at the level of federal circuit courts of appeal: In Sequoyah v. Tennessee Valley Authority (6th Cir. 1980), the court remained unconvinced by claims that a proposed dam’s flooding of non-reservation lands sacred to the Cherokee violate the free exercise clause. That same year, in Badoni v. Higginson (10th Cir. 1980), a different circuit court held against Diné (Navajo) claims about unconstitutional federal management of water levels at a dam desecrating Rainbow Arch in Utah. Three years later, in Fools Crow v. Gullet (8th Cir. 1983), the Eighth Circuit found unconvincing Lakota claims to constitutional protections for a vision quest site against measures involving a South Dakota state park.

Nearly every Native American nation is engaged in a struggle to preserve sacred lands, but rarely is the violence of treaty abrogation and the desecration of sacred land so pronounced as in the case of the Black Hills of South Dakota. The Lakota Sioux, along with other peoples native to the Northern Great Plains, consider the Paha Sapa, or Black Hills, to be the center of the world, the heart of everything that is, its seven sacred sites aligned with the very pattern of the stars. Many Lakota people say that it was there that White Buffalo Calf Woman brought the sacred pipe to the people and revealed to them their seven sacred ceremonies. They consider the land so sacred that they are not to live there on a permanent basis. For generations, the Lakota, Cheyenne, and other Native peoples of the Great Plains have looked to the Paha Sapa as the source of ceremonial as well as material sustenance. In the wake of decimated bison herds, their reliance on the resources of the hills for subsistence at lean times of year became all the more acute. They also have gone to the hills for their vision quests and to procure the trees central to the Sun Dance and other ceremonies. In both cases the relationship with the Black Hills has been governed by elaborate codes of respect.

Today, the Black Hills are big business. As South Dakota’s principal tourist attraction, they generate more than $100 million annually. Each year, tens of thousands travel to Mount Rushmore to view the monumental faces of Washington, Jefferson, Lincoln, and Theodore Roosevelt, which are carved out of Harney Peak, a traditional sacred site for hanblechia, or vision fasts. Within one hundred miles, 20,000 members of the Oglala Lakota people live in dire poverty and 80 percent unemployment on the Pine Ridge Reservation. Although the dispossession of the Black Hills is one of the dark tales of American history, the story of the ongoing Lakota struggle to reclaim the Paha Sapa is one of the brighter moments in American spiritual courage.

When Western Lakota leaders negotiated peace with the United States in 1868, they made certain that the Black Hills were protected by treaty. To negotiate peace with leaders of the Western Lakota, the United States committed itself under the 1868 Fort Laramie treaty to recognize as Sioux territory the western half of what is now South Dakota, including the Black Hills. A provision read: “No white person or persons shall be permitted to settle upon or occupy any portion of the territory, or without the consent of the Indians to pass upon the same.”

With rumors of gold, American prospectors flooded into the Black Hills anyway. In direct abrogation of the treaty, the Seventh Cavalry led by George Armstrong Custer marched into the Hills in 1874 to protect the settlers’ interests. The soldiers’ attempts to survey the land and build roads earned a bad name for Custer among the Lakota and led ultimately to his defeat at Little Big Horn two years later. But the famous Sioux victory brought only more soldiers to the region. Faced with the threat of their people’s starvation, a number of Lakota leaders were forced to part with the Black Hills, a decision made under duress and despite the fact that a provision from the 1868 Treaty requiring the approval of any amendment by three quarters of the adult male population was not met.

A century later, Lakota activists and tribal leaders pressed the U.S. Indian Claims Commission for a settlement of claims under the 1868 Treaty. In the mid-1980s, however, an impoverished Lakota nation chose to remain in poverty rather than give their assent to an offer of $122 million to settle treaty rights claims for the Black Hills. In the “spirit of Crazy Horse”—the courageous Lakota leader who never assented to the 1876 agreement, proclaiming that “one does not sell the earth upon which the people walk”—the Sioux of South Dakota’s reservations voted to keep struggling for the return of their sacred land.

In light of first amendment jurisprudence since Lyng, many Native communities have sought protections under the National Historic Preservation Act as a means to preserve lands of religious and cultural significance. Since this legislation rests on the importance to the American public at large of sites of historic and cultural value, Native communities seeking protections through Historic Preservation determinations are not expressly protecting Native religious freedom nor are they recognizing exclusive access to or control of sacred places. However, given free exercise jurisprudence since Lyng, historic preservation has offered relatively generous, if not exclusive, protection.

In 1990 a new designation of “traditional cultural properties” within the National Historic Preservation Act offered protection on the National Register of Historic Places for the scholarly, especially archeological, value of certain Native sites. This designation enabled Native communities and others to seek historic preservation protections for properties associated “with cultural practices or beliefs of a living community that (a) are rooted in that community’s history, and (b) are important in maintaining the continuing cultural identity of the community.” As Thomas F. King notes in his 2003 book Places that Count: Traditional Cultural Properties in Cultural Resource Management, the designation could include most communities but it was implicitly geared toward communities outside the American mainstream—perhaps especially Native American communities—seeking protection of culturally important and sacred sites. It did so without expressly making overt appeals to religious freedom. As King points out, this venue of cultural resource management has served Native interests in sacred lands better than others, allowing those seeking recognition on the National Register to skirt a previous regulatory “religious exclusion” that discouraged inclusion of “properties owned by religious institutions or used for religious purposes”; thus the designation expressly recognizes that Native communities don’t distinguish rigidly between “religion and the rest of culture.” Yet the policy remains subject to review and change and does not guarantee protection.