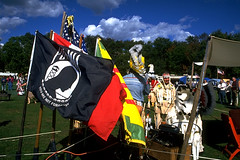 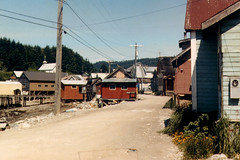 In this early twenty-first century, Native ways of life are at once endangered and alive and well. They are endangered by the legacy of U.S. Indian policies that have reduced many Native people’s experience of American history to little more than the dispossession of land, resources, and culture. The vast majority of Native American languages are endangered; many have become extinct. And yet this is also a moment of profound rebirth of Native languages, cultures, traditions, and life ways, as Native peoples maintain both the privacy and secrecy of important ancient rites and simultaneously adapt to changing times by creating new forms of community life and ritual.

During its early history, the United States extended the practice of the British colonies, making treaties with the leaders of Native peoples and establishing government to government relationship with Native tribes. With the increasing volume of movement westward, the United States began a policy of what was termed the “relocation” and “removal” of some of those peoples with whom treaties had already been signed. The signing and breaking of treaties became a pattern as the westward movement of European settlers continued.

The Cherokees of Georgia, for example, were forced in the 1830s into stockades and then ordered to walk what has been called the Trail of Tears to a designated Indian Territory west of the Mississippi. The Georgia Cherokees lost one fourth of their people along the Trail of Tears, but ultimately adapted to their new homes in Indian Territory. In 1873, Congress determined that treaties would be signed no longer with Native peoples, and soon assumed unilateral authority over reservation communities. Beginning in the 1880s, official policies of assimilation abolished communal property, carving up the reservations into individual plots of land that were often later sold under duress, and freeing up “surplus” land on the reservations for European-American settlers. Dances and ceremonies were outlawed through a series of regulatory actions of the U.S. government, and Native children were forced into English-only schools. What had been set aside as Indian Territory was opened to the settlement of Euro-Americans. In 1893, for example, the Pawnee and Tonkawa reservations were opened to homesteaders. By 1907, the former Indian Territory became the state of Oklahoma.

These were some of the most difficult years for Native peoples who found their treaty rights abrogated, their sovereignty undermined, and their land bases reduced. Those who remained resolved to maintain their distinctive life-ways and value systems faced relentless pressure to assimilate and leave their traditions behind. In 1934, however, the United States officially recognized the failure of its assimilation policies, and began to reverse them, creating instead a network of federally-recognized tribal governments. In 1935, Congress granted Native peoples the right to press land claims and treaty violations in the U.S. Court of Appeals. Court decisions and settlements of pending treaty claims, as well as the authority to contract out, has enlarged the role of many tribal governments. Some of these tribal councils and forms of governance have been refashioned from within, revising constitutions according to more indigenous forms of law and community decision-making.

The heritage of dispossession is not over. It is not past history. Rather, dispossession continues to set the terms today for Native people’s struggles for physical and cultural survival. The U.S. Cavalry no longer rides in Indian country, but land and economic policies join with subtler forms of forced assimilation to frustrate the self-determination of Native communities. Native peoples still struggle to retain their identity as nations and to remove the many forms of control over their lives that, in their view, have been imposed by governments not of their own making.

Though many Native people still speak their original tongue as their first language, many have lost the ability to speak their languages. Many Native languages are in danger of ceasing to be living languages. A study of 1990 census data found, for example, that fully 70 percent of Navajo children in Arizona between the ages of five and seventeen spoke the Navajo language at home. Among Lakota Sioux children the same age, the figure was 15 percent. Among Ojibwe children, the number was closer to 4 percent. Among most Native communities, however, the numbers are, sadly, even lower.

Widespread racism, poverty, and environmental degradation on Indian reservations and in the inner cities make it difficult for many Native people to live fully according to their traditions. Many are simply trying to survive and do not have the time, money, and energy to put into learning and teaching their language and culture. For other Native people, survival itself depends on maintaining their language and distinctive ways of life. While some languages and cultural traditions are in danger of being relegated to the pages of ethnologists’ books, the more surprising fact is that many Native communities enjoy a thriving original language and vibrant cultural traditions. Given the dominance of Euro-American culture and economy, this fact alone testifies to the resilience of these life-ways in adapting and remaining viable amidst rapid social change.