Religion as a Way of Life 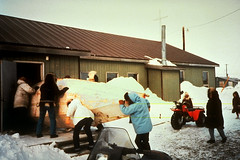 Religion as a Way of Life

In none of the Native American languages do we find a word that translates well into the English word “religion.” One of the few common denominators underlying the diversity of Native traditions is the sense that all dimensions of social life are profoundly integrated. Even among those Native people for whom English has become the primary language, many think the term “religion” as it is often used today is not useful; it seems to suggest an artificial separation of their spiritual traditions from their economy, government, art, law, medicine, and landscape. In most Native views, these aspects of life are all interrelated. Thus, rather than “religion,” the broader term “life-way” is often used to describe the traditions of Native peoples. While it is something of a truism for the devout of any religious tradition to assert that theirs is not a “religion,” but a way of life, for Native American communities, it is often emphatically the point.

For example, the six nations of the Iroquois, or Haudenosaunee as they call themselves, have a very sophisticated form of government with its own rules of debate associated with the ceremonial complex of the longhouse. Some say the longhouse traditions caught the imaginations of Benjamin Franklin and others who influenced the founding of American democratic institutions. One cannot say longhouse traditions are strictly traditions of “religion,” “government,” or “social structure,” for they are all three.

Among Alaska’s Koyukon people, success in subsistence hunting requires a knowledge of the landscape and of the behavior of big game. It is knowledge that comes with an elaborate code of ethics that mandates that hunters respect the land and the animals. “Religion” is not separate from the economic life of the community. Similarly, the Hopis of Arizona express gratitude in their ceremonial life for the forces that bring them corn, a sacred food, and that re-establish bonds between the people and the plant. For the Yuroks in California, the Navajos in the Southwest, the Cherokees in Oklahoma, the Wampanoags in Massachusetts, and the Tlingits in Alaska, the religious is inseparable, perhaps even indistinguishable, from the fabric of an entire way of life.