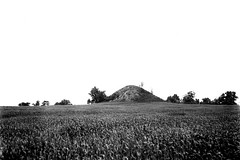 Religious pluralism is no stranger to American soil. When one takes into account the traditions of peoples native to America, one finds religious diversity—even pluralism—going back thousands of years. In the interactions among Native peoples there was, no doubt, both harmony and competition, both peace and warfare. Yet the accomplishments of diplomacy and economic exchange were frequently part and parcel of disciplined religious practices of ceremonial and cultural exchange. Indeed, these were practices of religious pluralism that long predated the arrival of Europeans, the Acts of Toleration in England or the First Amendment’s religion clauses. Cultural boundaries were crossed repeatedly as different peoples shared their sacred stories, songs, dances, ceremonies, and foods with one another.

A group of large, earthen mounds comprising the Cahokia site near St. Louis, Missouri, was one such center of cultural and religious diversity, the largest of the ceremonial centers of the Mississippian cultures. Today, one can hear the wind blow through the grasses that cover nearly 100 large, earthen mounds. But between 700 and 900 years ago, around the time of the signing of the English Magna Carta, one could have heard many languages spoken in this thriving trade and ceremonial center. Archeologists believe that more than 30,000 people lived in the vicinity of Cahokia at its peak. Thousands more journeyed here to exchange goods, pay tribute, and participate in ceremonies.

Native American communities formed and reformed new alliances with one another, especially after the first contact with Europeans. These alliances often galvanized around shared religious beliefs and practices. Many new prophets, like the legendary Deganawida (c. 1300), the Delaware Prophet (c. 1762), and the Munsee Prophetess (c. 1805) proclaimed new visions and helped forge new alliances of Native peoples, as Deganawida did with the nations of the Iroquois Confederacy or the Delaware Prophet did with the movement that became Pontiac’s Rebellion against the colonial powers.

It is important to remember that, while Native American peoples shared cultural repertories of beliefs, ceremonies and life-ways, one cannot speak of a single Native American religion. The religions of Native American peoples are as varied as the American landscape itself. Because various traditions of Native belief and ceremonial life are integrated into life-ways adapted to particular landscapes, Native traditions are sometimes categorized according to common geographic areas: for example, the Northeastern woodlands, the Southeast, the Great Plains, the Great Basin of the West, the deserts of the Southwest, the Pacific Northwest, or the varied landscapes of California.

Some traditions of belief and ceremonial life also correspond to shared language families, such as the Algonkian, the Siouxan, the Uto-Aztecan, the Athapaskan, and so on. Despite these attempts at categorization, with more than 200 distinctive languages native to the landmass now comprising the United States and a wide range of diversity of religious beliefs and practices—even among peoples occupying a similar landscape—to speak of one, monolithic Native American tradition is problematic at best. The diversity of religious and cultural traditions native to this land is both an ancient and a contemporary phenomenon.