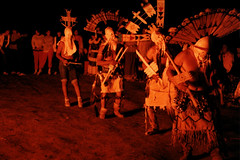 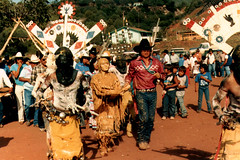 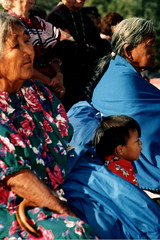 The Apache people have a sophisticated spiritual repertory of myths, ceremonies, and ways of life associated with their homelands in the Southwest. Along with the Navajos, the Apaches came to the lands of the American Southwest from the north and are related to other communities in the Alaskan interior and Canadian Northwest Territories who speak tongues of the Athabaskan language family. They are said to have arrived in the American Southwest between about 800-1000 CE. The Apaches settled among the agricultural Hopi and other Pueblo peoples of what are today Arizona, New Mexico, and Northern Mexico. One community of Apaches, the Mescalero Apaches, settled the high country in what is today southern New Mexico.

One Mescalero Apache ceremonial tradition which brings the tribe’s larger way of life into focus is that of initiating girls into womanhood. The initiation is an elaborate four-day ceremony and feast, for which a girl and her extended family have been saving resources and preparing spiritually all year, and in a larger sense, all their lives. Through the ceremony, the young girl is transformed into a woman and blessed with the prospects of a long and healthy life. Though the rite of passage is ostensibly just the girl’s, the ceremony is fully a community event. All members of the community are invited and fed as guests for several days by the girl’s family. Moreover the girl’s passage to womanhood is made sacred through a ritual transformation that casts blessings upon the community as a whole—indeed on the whole cosmos. Under the auspices of a ritualist known as a “singer” and with the guidance of an elder woman who is her “sponsor,” the young girl actually becomes the principal Apache deity, a female spirit who embodies the cyclical life forces of earth. This process of transformation includes singing, dancing, running, and other ritual enactments.

As the days of ceremony conclude, the community gathers around the girl-become-deity to receive her blessing of yellow cattail pollen, to share an elaborate meal of traditional food, to laugh and tell stories, and to learn the wisdom of their tradition. In a reciprocal process, the girl has become woman, but through this ceremony, the aging deity has also taken on the girl’s youth, to live on until the next ceremony, when another girl becomes woman and the renewal can once again take place.

The Chorus of “I Built a Wickiup”

“I Built a Wickiup” are the words of Changing Woman, the mythological Apache deity who created the Apache people, traditionally sung by the Apache medicine person as a young women being initiated in the Sunrise Ceremony is painted. A wickiup is a traditional Apache dwelling.

translation:
In the beginning there was no wickiup.  So I built a wickiup.
(repeat)