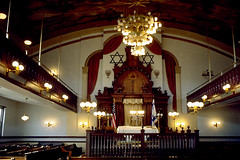 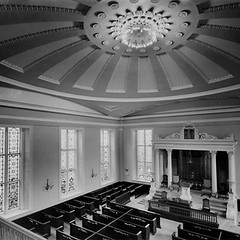 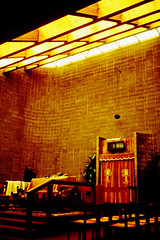 Throughout the course of American Jewish history, the synagogue has been the central institution of the community. Today, a typical synagogue contains seating for the gathered community and a platform called a bimah, with a desk or podium for the reading of the Torah scrolls. The bimah’s most striking feature is the ark, a shrine containing the Torah scrolls which is located along the eastern wall, or on a wall oriented toward Jerusalem. The ark is usually beautifully ornamented, its doors sometimes covered with a curtain. In modern synagogues, the ark is often the most spectacular architectural feature.

Synagogues were first developed in the ancient Diaspora to replace the Temple of Jerusalem. By the Middle Ages, the synagogue had developed into an institution embodying Judaism’s key elements: it is simultaneously a house of God, Torah, and Israel that served as a place of prayer, study, and community gathering. Both the Hebrew bet knesset and the Greek synagogue refer to a place of assembly. As such, the synagogue is undeniably the Jewish community institution par excellence.

In America, the early synagogue had a central role in the development of American Jewish life. During the colonial and early federal periods in America, synagogues were the only Jewish institution and came to be synonymous with the Jewish community. Fulfilling both religious and social needs of its membership, it represented the Jewish community to the extent that historians speak of the institution as the “synagogue-community.” Throughout the history of Judaism in America, the synagogue has undergone a number of changes: the modern synagogue is as much the product of its American history as of its Jewish past.

In the early and mid-nineteenth century, Jews settled in America in greater numbers. They soon established multiple synagogues, and the single synagogue-community became a diverse community of synagogues. During the nineteenth century, Jews also created other significant community structures, such as philanthropic agencies that functioned quite apart from the synagogues. The spheres of synagogue and community were thus separated and began to compete with one another for the time, commitment, and resources of America’s Jews. The subsequent history of the American synagogue may be read as its attempt to regain its location at the center of the Jewish community.

In the late nineteenth and early twentieth centuries, new synagogue movements were created to serve the needs of their Jewish communities. The first was the Reform movement and its characteristic synagogue, the Reform temple. The second was the Conservative movement and its characteristic synagogue, the synagogue-center. These two movements succeeded in capturing the loyalty of the majority of American Jews of their time. The synagogue-center especially, an institutional mix of religious and social functions, became the prototype of all subsequent American synagogues. The most recent synagogue type—the small, informal, non-hierarchical, do-it-yourself havurah of the Jewish Renewal movement—may be understood as yet another version of the social-religious synthesis of the American synagogue-center.

Today, the synagogue is re-aligning itself with the powerful world of Jewish federations and philanthropies. In an unprecedented turn of events, synagogues have begun accepting federation funding and sharing with federations the community’s responsibility for Jewish education. Many synagogues have also begun to emphasize the community-building aspects of their own programs, through social work and political activism. American Jews regularly turn to their synagogues not only for religious services, but for all manner of Jewish events, including Holocaust commemorations and speeches by Israeli politicians.

But more than anything else, the modern synagogue remains a religious institution, a place for the Jewish encounter with the Divine. As spirituality has become more important to American society, the synagogue has become a center of Jewish renewal. Like many churches, many synagogues today are experimenting with new liturgical texts, music and choreographies. In new synagogue construction and renovation, the community often adopts new spatial arrangements in an attempt to reinvigorate the prayer service. One of the principal innovations is the creation of a moveable bimah. In older synagogues, where the bimah is a fixed, raised platform at the front of the sanctuary, the service tended to become decorous; the congregation a passive audience. By moving the bimah to the center of the sanctuary, synagogues are attempting to create space conducive to greater congregational participation and a deeper experience of community prayer. The synagogue today is reviving its legacy of Jewish centrality in both spirit and form.