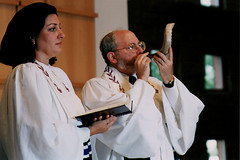 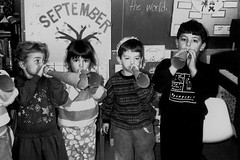 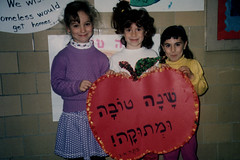 In the month before Rosh Hashanah (Elul), weekday morning synagogue services include the blowing of the shofar, or ram’s horn. On the first day of Rosh Hashanah, the central act of the service in every synagogue in the world will be the sounding of the shofar as prescribed in the Torah: “You shall observe it as a day of sounding the horn” (Leviticus 23:24). Although the Bible gives no specific reason for the practice, a multitude of reasons are given by generations of rabbis, including marking the beginning of creation, sounding the call to ten days of repentance, reproducing the horn blast at Sinai, or reminding us of the horns blown at the Day of Judgment. Four different types of shofar blasts punctuate the Rosh Hashanah liturgy, each interpreted as signaling its own message. As Rabbi Irving Greenberg put it in The Jewish Way (1988), “The sound of the shofar during the High Holy Days is meant to cut through the web of routine, rationalization, and indulgence; to wake up people and get them to take themselves and their actions as seriously as they deserve.”

Beginning in the month before Rosh Hashanah, Jews wish one another a good year: “L’shana tovah!” Invoking the figurative image of the Book of Life in which one hopes to be inscribed for another year, they will extend the greeting, “May you be written and sealed for a good year.” Certain customs signal this wish, such as eating apples or challah dipped in honey for a “sweet” year. Among other important practices of Rosh Hashanah is tashlikh (“casting off”). Practitioners might walk together to a nearby river or stream, or perhaps to the ocean, and empty their pockets, symbolically casting off their sins into the water with a prayer. Sometimes they will put bits of bread in their pockets, the casting of bread into the water signifying the desire to rid themselves of sins.

To mark the end of the Days of Awe, Yom Kippur commemorates the sacred covenant of the Jewish people through a Day of Atonement. Yom Kippur’s focus on atonement means that Yom Kippur is not festive; an appropriate Yom Kippur greeting is “[May you have] an easy fast” (tzom kal). Yom Kippur’s mood of solemn contemplation and repentance is heightened by rules of physical abstinence, which require a full fast from all food and drink for twenty-five hours (though young children, women in childbirth, and elderly or ill people are not required to participate). Since in the Jewish tradition days begin in the evening, all holy days, including Yom Kippur, begin with an evening service. The Yom Kippur evening service begins with the ritual singing of a beloved hymn, Kol Nidre.

If a Jewish person chooses to go to a synagogue only once or twice a year, it will probably be on Rosh Hashanah or Yom Kippur. As a result, U.S. synagogues are often crowded to overflowing for these services, with many synagogues arranging a ticket system and hiring temporary staff to handle the overflow. For instance, at Temple Isaiah, a Conservative synagogue in Atlanta, the congregation overflows from the main sanctuary into the social room, set up with rows of folding chairs, where a large screen television broadcasts the service. As in synagogues throughout the world, Temple Isaiah worshippers dress in white, including white kippot, as a symbol of purity.

Historically, Yom Kippur was the one day of the year on which the high priest could enter the inner sanctuary of the Temple in Jerusalem, “the Holy of Holies,” marking the only time that he would pronounce the sacred name of the Lord and ask forgiveness for the people’s sins. The ancient Israelites would then symbolically place their sins upon a goat, called a “scapegoat,” which would be driven from the city bearing the sins of the community. On Yom Kippur today, individuals seek forgiveness from everyone they have wronged during the past year: one cannot present oneself before God for forgiveness without first asking pardon from those wronged. The congregation confesses its sins communally with the words, “We have sinned…” Together, the Jewish community asks that their wrongdoing be forgiven and reconciliation to God granted. The service lasts until sundown, with a recitation of the story of the entrance of the priest to the Holy of Holies, and readings from the Torah and the Book of Jonah. At one point in the service, the rabbi or hazzan prostrates himself before the ark, asking God to forgive his or her sins, and he or she is helped back up by two members of the congregation.

At nightfall, the services end with another blowing of the shofar, and congregants adjourn to their own homes or the homes of friends to break the fast together with a festive meal. As Yom Kippur ends and the flow of the new year rushes on, the Jewish community has a fresh chance to be forgiven, to be human, and to be good to one another and to God.