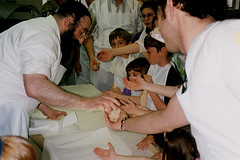 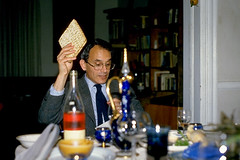 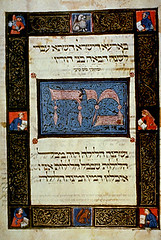 Passover, or Pesach, is a festival of deliverance, recalling the redemption of the children of Israel from slavery in Egypt more than three thousand years ago. Lasting seven days in Israel and eight in the Diaspora, Passover is one of the most important holidays in the Jewish year, celebrating the journey of the people of Israel from slavery to freedom and recalling the nation-building experience of the Exodus from Egypt. In this way, it rejoices in the continuity of the Jewish people from ancient Egypt to the present.

Passover is also called the “Festival of Unleavened Bread” because when Moses gathered the Hebrew people together to lead them out of Egypt, there was little time to prepare for the journey. Rather than baking bread with yeast which would take time to rise, the people made unleavened bread. The eating of only matzah, or “unleavened bread,” over the eight-day period is one of the principal observances of Passover. Before Passover, observant Jews will thoroughly clean their homes, getting rid of chametz, anything made with leavening. The search for each and every crumb of chametz has become a lively part of the scrupulous observance of Passover, with some observant communities going through the kitchen with a blowtorch to burn away any crumbs. As the festival approaches, supermarkets stock boxes of matzah for Jewish families to purchase and some Jewish communities gather to participate in matzah-making demonstrations, recalling the labors of their ancestors in the hours before fleeing from Egypt.

On the first two nights of Passover in the Diaspora and the first night in Israel, Jews have a seder (literally “order”), a special meal at which friends and family gather around the dinner table and read the Haggadah (“telling”) that recounts the Passover story. People most commonly hold seders at home with their own families and closest friends, for Passover is the most important home ceremony of the Jewish religious year. In the United States today, it is also becoming increasingly common to hold public seders, sometimes using narratives which link Passover themes of oppression and liberation to events happening in today’s world. In Denver, CO for example, women from all branches of Judaism gather for an annual women’s seder which uses an egalitarian Haggadah. In remembering the story of how Jews were released from bondage, they focus on the liberation themes which continue to have relevance in their own lives. This Denver women’s seder has met with such success and generated such enthusiasm that it has grown rapidly, and members have started selling their Haggadah packets so that this kind of seder can be duplicated by others. Increasingly, interfaith seders have gained popularity as opportunities to share elements of Jewish life and history with non-Jewish neighbors and friends.

The seder meal has a distinctive liturgical order and elaborate symbolism. The table is set with a special seat, place setting, and glass of wine for the prophet Elijah. In the middle of the table is the seder plate, which contains various foods arranged in a particular order. Each food is symbolic of aspects of the Jews’ enslavement. For example, bitter herbs represent the bitterness of slavery, while haroset, a mixture of apples, wine and nuts, symbolizes the mortar used by the slaves in building for their Egyptian masters.

The youngest person present reads the Four Questions, beginning with “Why does this night differ from all other nights?” The unfolding story and sequential actions of the meal form a ritual response to these questions, with all gathered around the table reciting the familiar words that express their identity and continuity with the ancient story of redemption. Every generation is to feel that they themselves experienced slavery’s suffering and the joy of liberation: “We were Pharaoh’s slaves in Egypt, and the Lord our God brought us forth from there with a mighty hand and an outstretched arm. And if the Holy One, blessed be He, had not brought our forefathers forth from Egypt, then we, our children, and our children’s children would still be Pharaoh’s slaves in Egypt.” The story and ritual unfold, and toward the end of the liturgy there is a break to enjoy a special meal before the final prayers and blessings are said.

One of the final rituals of the seder is the children’s search for the afikomen, the matzah hidden by the leader at the beginning of the seder. The interest of the children is sustained to the very end by the promise of the search for the afikomen. This matzah must be found and returned in order to complete the seder after the meal is over. When they find this hidden matzah, the children traditionally bargain with the leader to get money or toys in exchange. After the afikomen is found, the last taste on the lips of those who have observed the seder is the taste of matzah, the unleavened bread of the slaves Moses led to freedom. The evening ends with songs, often including the wistful words, “Next Year in Jerusalem!”

In ancient Israel, Passover was also one of the three great agricultural festivals, falling on the first full moon of the springtime month of Nisan, a time of the first harvest, the barley harvest. Along with Sukkot and Shavuot, this became a time when people would, in the words of the Psalmist, “go up” to the temple in Jerusalem for the celebration with the first sheaves of the harvest. Seven weeks later comes the festival of Shavuot, the first harvest of wheat. In its historical interpretation, Shavuot became the festival that celebrated the pivotal event in Jewish history following the Exodus from Egypt: God’s revelation of the Torah on Mount Sinai.

Almost everybody knows the ancient story of Moses and the Jews flight to freedom.  Egypt.  Slavery.  The pharaoh, and plagues, and the parting of the Red Sea.  Let my people go.  It’s bedrock.

Celebrated writers Jonathan Safron Foer and Nathan Englander talk about their new American translation of the Passover Haggadah, a story of freedom.

The Jewish remembrance of that story each year at Passover is elaborate, also ancient, and guided by the text called the Haggadah. There have been thousands of translations from the old Hebrew. Now, celebrated American writers Jonathan Safran Foer and Nathan Englander have taken their turn.

This hour, On Point: a new American Haggadah, and the great old story of freedom.