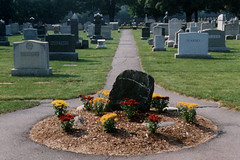 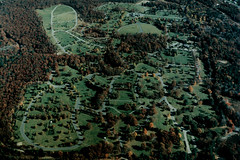 The death rites of the Jewish tradition are simple, but the surrounding embrace of the Jewish community at the time of death is elaborate and profound. Burial must take place in consecrated ground within forty-eight hours of the time of death, excluding Shabbat and holidays. It is little wonder that the first Jewish communities in America often established cemeteries before they built synagogues.

Traditionally, when a loved one died, the Jewish community would tear their clothing as a ritual expression of grief. Today, a ribbon is often torn and worn symbolically on the grieving family members’ clothes. The funeral may be held at the synagogue to which the family belongs, with a rabbi officiating. It is often the custom for the rabbi to eulogize the departed with words of appreciation for his or her life. The coffin is traditionally made of wood, simple and without ornamentation. This simplicity is also reflected in the burial shroud, a white garment deliberately reminiscent of the white clothing that many Jews wear on Yom Kippur. No matter how rich or poor in life, the white shroud is a reminder that all are equal before God. At the cemetery, when the coffin is lowered into the ground, those gathered collectively shovel dirt into the grave, actively participating in this way in the burial of the beloved one.

The mourners recite a prayer called the Kaddish which they will recite in honor of the deceased for eleven months. This prayer, recited at the conclusion of each synagogue service, says nothing in particular about death, but is an affirmation of God’s holiness to which mourners bear witness. For the subsequent year, the bereaved will stand in the synagogue to recite this affirmation in memory of the dead:

Let the glory of God be extolled, let His great name be hallowed, in the world whose creation He willed. May His kingdom soon prevail, in our own day, our own lives, and the life of all Israel, and let us say: Amen…

For us and for all Israel, may the blessing of peace and the promise of life come true, and let us say: Amen.

May He who causes peace to reign in the high heavens, let peace descend on us, on all Israel, and all the world, and let us say: Amen.

The final sentence in prayer is for peace.

Following the burial, the immediate family of the deceased will go through an intense period of mourning for seven days, called sitting shiva, meaning seven. In keeping with tradition the mourners cover all the mirrors in their house, light a memorial candle, and sit on low stools to receive visitors. Traditionally, they do not leave the house for the entire week, except to attend a Shabbat service. The community comes to them, providing food and a circle of support. A minyan gathers each day for a prayer service and to recite the Kaddish. During this time, friends and extended family come to visit the mourners, to sit with them, to listen to their grief and memories, to share their own memories of the deceased, or simply to be present with them, even in silence. Surrounding the mourners with the love and care of a community, not just on the day of the funeral, but for an entire week, begins to lighten the burden of grief by facing it and sharing it.