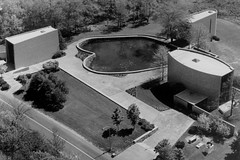 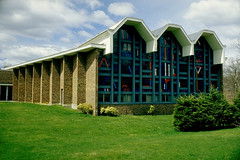 In the decades following World War II, American Judaism was affected by three major trends. The first was the move of the second- and third-generation American Jews to the American suburbs and the subsequent reimagining of Judaism in a mid-century suburban lifestyle. The second was the perceived decline of anti-Semitism in America and the denominational assimilation of Jewish synagogues. These were related trends that helped to establish Judaism as one of America’s three principal faiths (alongside Protestantism and Catholicism). The third was the events of the Holocaust and the establishment of Israel, together with the general philosophical trend of existentialism, which prompted a reexamination of Jewish theology and gave rise to a renaissance of Jewish thought in America.

The move to suburbia held profound implications for the future of American Judaism. Cut off from the Yiddishkeit culture, ethnicity, and political experience of their immigrant parents, mid-century Jews sought to re-establish Jewish community in a form more compatible with American society. In a development highly reminiscent of the Americanizing impulse of the Sephardic and Ashkenazic Jewish communities of the nineteenth century, suburban American Jews established hundreds of new synagogues that often included facilities for socializing and for recreation in an attempt to replace the ambiance of the old neighborhood. However, in a slow rejection of the traditionalism of their parents’ culture, early suburban Jews began to attend religious services less frequently. Secular Jewish community centers were also established. Most importantly, however, the synagogue centers conspicuously incorporated school buildings, a clear statement about the importance placed on educating the next generation.

For some Jewish parents, carpooling children to the Hebrew school was their primary form of involvement in Jewish life, with home life including very little Jewish practice. Critics have argued that one of the messages communicated in these years was that Judaism is for children, and certainly not a great heritage worth taking seriously as adults.

Meanwhile, the defeat of the Nazis in World War II and the emergence of information about the Holocaust did much to destabilize the anti-Semitism of prior decades. Jews were now seen as patriotic Americans and full members of American society. The vehicle for this acceptance was a new model of pluralism in America, based on religious difference rather than cultural division, and most prominently articulated by an American Jew named Will Herberg in his 1955 book, Protestant, Catholic, Jew: A Study in American Religious Sociology. Herberg’s thesis was that immigrants of various types had assimilated into American life by shedding their ethnic particularities in favor of religious identification. Religious pluralism within a Judeo-Christian framework became the engine for a revival in American religion, Judaism included.

The reformulation of Judaism as a religion was accompanied by a new burst of Jewish intellectual activity. Based in New York City, Jewish writers, critics, and other public intellectuals came into prominence. These included Morris Raphael Cohen, Horace Kallen, Will Herberg, Irving Howe, and Nathan Glazer, all secular thinkers who observed religious life but took little part in it themselves. That same year, a classic in American Jewish theology also appeared: Rabbi Abraham Joshua Heschel’s Man Is Not Alone. Heschel, a refugee from Germany who became a professor of Jewish thought and mysticism at Jewish Theological Seminary, was the first major proponent of religious existentialism and Hasidic spirituality in America. He became the mentor and guide to two generations of American rabbis, and even gained some measure of public fame by marching with Martin Luther King, Jr. in Selma, Alabama in 1965.

This postwar Jewish revival emerged on two levels: the popular and the elite. On the popular level, American Jews moved to suburbia and divested Judaism of much of its cultural energy by building synagogues they did not regularly attend. In the elite sphere, rabbinic teachers conceptualized a new modern Judaism independent of the European culture that had been destroyed in the Holocaust. In both cases, the view of Judaism as a religious tradition was preferred over that of Judaism as a culture or civilization. Yet the two new cultural centers of world Jewish civilization were then in the making: a developing state of Israel and a religiously reawakened United States.