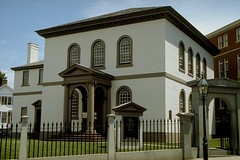 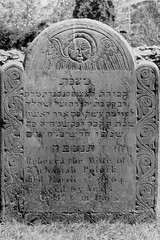 In September of 1654, twenty-three Sephardic Jewish refugees from Brazil landed in the Dutch colonial port of New Amsterdam. Soon after their arrival, the settlers took the first steps in establishing a lasting Jewish community in their new home. They formed a congregation for the purpose of group worship and they applied for permission to create a Jewish burial ground. Though government authorities, namely the colony’s governor Peter Stuyvesant, resisted the Jewish community at first, the group ultimately achieved the right to settle and practice their religion. By the end of the 17th century, then under British rule in the renamed city of New York, this first Jewish settlement in North America became permanently established as a K”K or kehillah kedosha (holy community). This group would eventually become known as Congregation Shearith Israel, the first synagogue in American history.

Shearith Israel added a new dimension to Jewish life; the community was the synagogue and the synagogue was the community. By necessity all those who wished to publicly identify themselves as Jewish joined the synagogue, and the synagogue assumed responsibility for the religious and social functions which had formerly been divided among various Jewish agencies in Europe. These spiritual and community functions included communal prayer, group assembly, holiday celebrations, life cycle rituals, and burial services. Community members also visited the sick, provided for the poor, educated the young, koshered meat, baked matzah for Pesach, arbitrated on Jewish law, politically represented the Jewish community, and provided everyday socialization with other Jews. While the continuity between the synagogue and the Jewish community was influenced to some degree by the norms of the Christian milieu, this development also drew from Jewish immigrants’ reinterpretation of their past European communal existence. As such, the synagogue model profoundly influenced the future of Jewish life in America.

As the population of Jewish settlers in North America grew and began to disperse, the New York pattern was soon duplicated in four other cities along the Atlantic seaboard. The first Jewish settlers in New England arrived in the port of Newport, Rhode Island in about 1658, and a community began to take shape with the formation of a Jewish cemetery in 1677. Jews also settled in Charleston, South Carolina by 1697. A congregation was organized there in the fall of 1749 and governing regulations were adopted that same year. A Jewish community then emerged in Philadelphia during the 1760s and a congregation was formed in Savannah, Georgia in 1790. In each case, mostly Sephardic Jewish individuals and families united into a community through the formation of a religious congregation. Moreover, these nascent Jewish groups were unified with the Ashkenazic Jews who had begun to immigrate to America from Central and Eastern Europe. As in New York, Jews joined a single congregational synagogue and communal structure, which were one and the same. These centers were organized and maintained by the laity; the post of rabbi did not exist as it did in Europe at this time.

The colonial Jewish synthesis of synagogue and community had long-lasting results, since the several institutions formerly used for the preservation of communal identity, religion, and peoplehood were brought together. This process de-emphasized ethnic Jewish identity and enhanced the shared religious identity. This shift was likely encouraged by the U.S. Constitution’s emphasis on religious freedoms and by the American pattern of denominationalism, in which group differences came to be most comfortably expressed in terms of a religious denomination. Whereas in Europe the traditional Jewish communal structure of the kehillah was abruptly dissolved by Emancipation, the dissolution of the kehillah in America took place more gradually, as the community was largely part and parcel with the synagogue.

In retrospect, it is clear that Jews in colonial America began to redefine the meaning of Jewishness in society from the start. American Jews have been experiencing the tension between their religious and ethnic identities ever since.