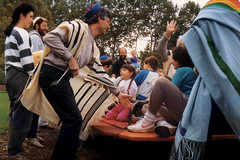 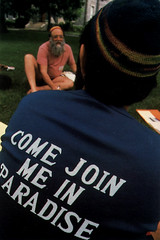 The Jewish counterculture of the 1960s, a movement of religious revival, was characterized by two main themes. The first was a rejection of the conventional synagogue and a commitment to a less formal and more intimate Jewish community that came to be known as the havurah. The second was the critique of American Judaism for being devoid of meaning and authentic religious experience. The Jewish counterculture aimed to rediscover Jewish learning and piety in general, and to revive an interest in Jewish mysticism and spirituality in particular. In the past decade, this rediscovery of Jewish spirituality has become a new force in American Jewish life—the “Jewish Renewal” movement.

Jewish Renewal has deeper roots in the eighteenth century Jewish pietist movement of Hasidism. Like Jewish Renewal today, Hasidism posed a social and religious challenge to the rabbinic establishment of the time and marked a reemergence of the age-old tradition of Jewish mysticism. In late twentieth- century America, perhaps the two main inspirations for the Jewish Renewal movement were rabbis Abraham Joshua Heschel and Shlomo Carlebach, figures of very different temperament and style but both of Hasidic background, both modern day mystics and teachers of immense erudition.

Under the leadership of a new generation of rabbis such as Zalman Schachter and Jonathan Omer-man, Jewish Renewal is a kind of neo-Hasidism. Rabbi Schachter, in particular, has served as the rebbe, the Hasidic leader, for a number of havurah groups originally called B’nai Or, later changed to P’nai Or, and now organized as the Aleph Network.

Another aspect of the movement is its openness to other religious traditions and forms of spirituality. Hence the P’nai Or havurot are also inspired by New Age spirituality and the twelve-step healing movement. Rabbi Schachter frequently collaborates with other New Age leaders such as Ram Dass, and currently is on the faculty of the Naropa Institute, a center of American Buddhism. Similarly, Elat Hayim is a Jewish retreat center modeled on the ashram in Western Massachusetts called Kripalu. It combines programs of meditation, yoga, and holistic health with Jewish study, festival observance, and community building. Its workshops include topics like “Entering the Gates of Jewish Spirituality” and “Jewish Mysticism for Daily Living.”

By maintaining such an eclectic sensibility, the Jewish Renewal movement serves as a bridge back into Judaism for many Jews who might otherwise have found their spiritual path elsewhere. Some Jewish Renewal leaders have noted the potential of this population by pointing to the phenomenon of Jewish-born Buddhist meditation practitioners and teachers. The disproportionate number of born Jews who have chosen a Buddhist spiritual path has been investigated by Roger Kamenetz in his book, The Jew in the Lotus.

In the 1990s, the revivalist tenor of Jewish Renewal has begun to influence mainstream Judaism. This is witnessed, for example, by the spectacular success of the “post-denominational” congregation B’nai Jeshurun on the Upper West Side of Manhattan. Inspired by a charismatic “rebbe” named Marshall Meyer, the communal worship of B’nai Jeshurun is informed by the affective spirituality and sensual musicality of Hasidism. The community combines the dual emphasis on personal and social transformation that is evident in Michael Lerner’s magazine Tikkun, taking its title from the Jewish ethical vision of tikkun olam, repairing the world. Lerner’s book, Jewish Renewal: A Path to Healing and Transformation, details both an ethical and spiritual vision.

In a more general sense, it might be said that every movement of American Judaism today has shown signs of renewal. Under the guidance of Rabbi Arthur Green, a leader of the early havurah movement and scholar of Hasidism, the formerly rationalist Reconstructionist movement has rediscovered spirituality. Under the influence of professor of liturgy Lawrence Hoffman and liturgical composer Debbie Friedman, the Reform movement too has begun to experiment with greater aesthetic affect in its worship. Even the more conservative movements of Conservativism and Orthodoxy have become more conscious of the importance of music, spirituality, and communality. Yet despite its apparent influence, it remains to be seen whether Jewish Renewal will continue as a loosely organized trend on the margins or evolve into a fully institutionalized presence on the American Jewish religious landscape.