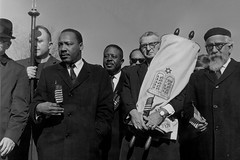 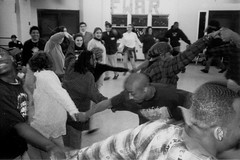 It has often been noted that American Jews tend to be politically liberal, and sometimes been said jokingly that though Jews may look like Episcopalians, they vote like Puerto Ricans. Jews, having achieved the educational and economic levels of the so-called American elite, have voting patterns that continue to resemble those of groups struggling to get on their feet. And while the Reagan years saw some Jews shift to the right, by and large the observation still holds true. Contrary to all socio-economic indicators, Jews remain noticeably and disproportionately liberal. In 1989 The Los Angeles Times polled Jews on the aspect of Judaism that was most important to them. The common answer was “social justice.”

Judaism has a long tradition of religious concern for the dispossessed. From its own experience as a minority in the Diaspora, the Jewish community has often viewed political and social problems from the side of the marginalized. And traditionally, the Jewish people have had a communitarian orientation when solving societal problems. Today, the Jewish passion for social justice is often traced back to the religious tradition of tikkun olam, literally “repairing the world,” a process in which men and women are God’s partners. And this very process of repair is the vehicle of God’s presence in the world.

Some would argue that historical factors have had a more important role than religious vision in shaping Jewish liberalism in the modern period since the European Enlightenment. First, the civil emancipation of European Jewry predisposed Jews to support the liberal democratic state. Throughout the nineteenth century, Jews gravitated to movements of the left-wing, and socialism became a new religion for some. Many of those who arrived in the United States during the mass immigration of 1881-1914 were so disposed and they formed a new Jewish socialist movement. But Jewish socialism did not last beyond the first generation, as immigrants’ children became more attuned to the rhythms of America. Nonetheless, many of the progenitors and greatest supporters of President Franklin Delano Roosevelt’s New Deal in the 1930s were second generation American Jews who maintained a deep ethical concern for the well-being of workers. The same can be said for the liberal policies of the Kennedy-Johnson administrations, and for the progressive social movements of the 1960s. One explanation for American Jewish liberalism, therefore, is that it is an Americanized version of immigrant socialism.

The best explanation for American Jewish liberalism, however, is that it is consonant with the positive aspects of the Jewish experience in America. Having benefited from immigration policies opening to them, the elimination of most discriminatory barriers they had faced, many Jewish immigrants came to support such measures for others as a matter of course. In order to integrate into American society, Jews depended heavily on public education and social welfare and thus continued to prize the American educational system and to play major roles in social welfare professions. To preserve their distinctive culture Jews cultivated a “hyphenated” American identity while developing an array of ethnic institutions. The ideological rationale for this strategy was “cultural pluralism,” articulated by Horace Kallen in 1915, which cherishes the freedom to be oneself as a foundational tenet of American democracy. Related to this is the importance of religious freedom to American Jews, as ensured by the strict separation between church and state—again a basic plank of liberalism.

The essence of American Jewish liberalism, then, is the congruence between American and Jewish values. Liberalism may well be construed as the common legacy of both Americanism and Judaism, and some would say the United States Constitution has been adopted by Jews as if it were a latter-day Torah; the Bill of Rights a new Ten Commandments. American Jews take great pride in the fact that the Liberty Bell in Philadelphia is inscribed with the biblical injunction to pursue justice, and the Statue of Liberty in New York harbor engraved with words by American Jewish poet Emma Lazarus: “Give me your tired, your poor, your huddled masses yearning to breathe free. . . .” The first Jewish representative on the Supreme Court, Justice Louis D. Brandeis, was a staunch advocate of progressivism and liberalism, and American Jews helped found both the American Civil Liberties Union (ACLU) and the National Association for the Advancement of Colored People (NAACP). During the 1960s, Jewish activists were instrumental in every social movement of the time: civil rights, anti-war, and women’s liberation. In the 1990s, some of the most liberal members of Congress have been Jews—from Barney Frank and Bernie Sanders in the House to Paul Wellstone and Barbara Boxer in the Senate.