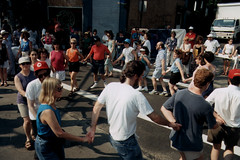 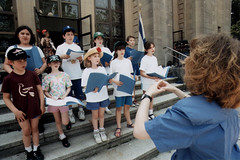 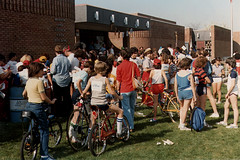 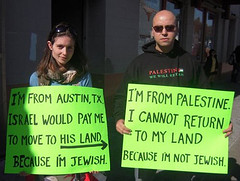 A primary element of American Jewish identity is the Jewish community’s sense of connection to the State of Israel, the Jewish national home. This connection is both deeply emotional and starkly political, and it motivates American Jews to support Israel as if it were their second country. It is one Jewish commitment shared by the majority of American Jews, whether religious or secular. For the observant, love for Israel is a religious injunction; for the secular, political support for Israel, called Zionism, has itself become a quasi-religious commitment. Today, some Jewish observers would assert that Zionism—together with liberalism, Jewish philanthropy, and Holocaust memorialization—may constitute the “civil religion” of American Jewry.

For nearly one hundred years, American Jews have participated actively in the international campaign to establish a Jewish state. Following the creation of Israel in 1948, the Zionist impulse became somewhat more subdued, but it revived dramatically with the Six Day War of 1967. Since then American Jewish communities have celebrated Israeli Independence Day with parades, street fairs, and other festivities, and the United Jewish Appeal, America’s leading Jewish fundraising organization, has raised hundreds of millions of dollars to aid the developing state. On the political plane, organizations such as the American Jewish Congress have defended Israel in the world arena—protesting strongly, for example, against United Nations resolution 3379 equating Zionism with racism. Still other Jewish organizations, such as Americans for Peace Now, have actively supported the peace process between Israel and her Arab neighbors.

To some extent America and Israel have become competing and interlocking spheres of Jewish life and vision. Many American Jews have gone to Israel to live permanently as citizens; others maintain a strong sense of rootedness, making frequent visits and sending their children to study there. Still others are primarily oriented toward America and the vibrancy and vitality of its own Jewish religious life. And as the politics of the Arab-Israeli conflict has become more contentious, debate among American Jewish circles has become more strident. The old unanimity of support for Israel is attenuated. Concurrently as Israel has become more secure—both militarily and economically—American Jews have felt a less urgent need to focus their attention on its support.

Ironically, even as Israeli life has become more Americanized, American Jews and Israelis often feel more distant culturally and religiously than ever before. For their part American Jews are now less inclined to define themselves in terms of their shared peoplehood. Instead, a revival of Jewish religiosity in America has dampened enthusiasm for a primarily ethnic or national form of Jewish identity. For them, the health of the American Jewish community depends not only on the well-being of Israel, but also on the well-being of a spirited religious life in American synagogues and homes.

Yet the bond to Israel remains strong. Jews take pride in the modern revival of the Hebrew language as the official language of Israel and as a language of modern literature and poetry. And Israel persists as the primary symbol of Jewish strength and political autonomy, the antithesis of centuries of Jewish powerlessness and homelessness. It remains the religious and cultural center of world Jewry, providing a focus and a fountainhead for Jewish life in the Diaspora. For Israel is the very embodiment of Jewish origins, the promised land of the Bible, and the birthplace of the Jewish people. These are powerful symbols, which will long continue to inform the loyalties and commitments of Jews in America and around the world.